Fauna of the Verde Valley 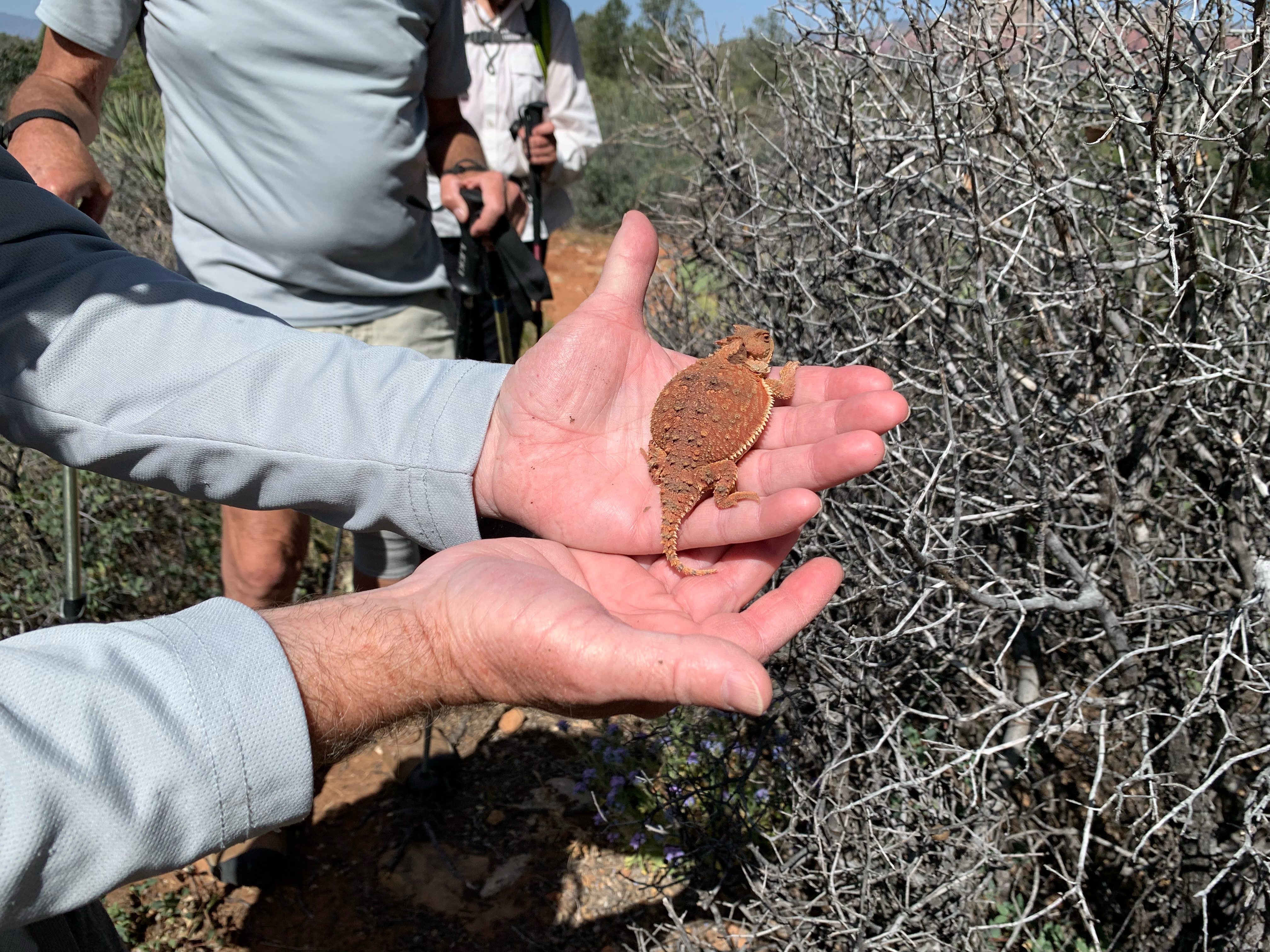 The Verde Valley has an abundance of flora and fauna. This little guy was just meandering down the path on a recent Westerner Hike.

The Sedona Westerners Hiking Club hosts a series of expert speakers at their monthly meetings who present fascinating topics relevant to the beautiful lands that surround us, the wildlife that inhabits those lands, and the preservation of both.  The Westerners are passionate about caring for protected lands and species.

At a recent Zoom meeting, the Sedona Westerners were honored to welcome Ms. Janie Agyagos, Wildlife Biologist, from the US Forest Service who spoke with us about the fauna of the Verde Valley.  Janie has been with the Forest Service for over 30 years, and she is the sole wildlife biologist for the 550,000-acre Red Rock Ranger District, which includes Sedona and the surrounding US Forest Service land in the Coconino National Forest.

Among her many responsibilities, Janie inventories and monitors rare birds, mammals, reptiles, amphibians, invertebrates, and plants.  She designs and implements wildlife habitat improvement projects focusing on the over 100 “special status” and endangered species.  She also develops and presents environmental education programs, brochures, signs, and articles.

What most amazed the Westerners was the great variety of wildlife species present in the Verde Valley and the vast number of endangered and sensitive species there are due to various environmental and human impacts.  From birds, to snakes, to frogs, toads, snails, fish, wolves, fox, coyote, bobcats, bears, elk, deer, bats, butterflies, beetles, spiders, salamanders, lizards, and turtles, all are threatened to some degree due to habitat, climate, or other changes in the environment.

Among bird species, the Mexican Spotted Owl, the Western Yellow-billed Cuckoo, and the Southwestern Willow Flycatcher are endangered, while bald eagles have recently come off the endangered species list and are now considered “sensitive”.

Garter snakes are considered “threatened” because even though harmless, people tend to kill them thinking they may be poisonous.  Garter snakes benefit the environment by eating insect pests that harm plants especially in gardens.

Among fish species native to the area, Janie reported that Arizona ranks 1st in the US for the highest percentage of fish species at risk (85.7%).  She said the main causes for decline include alteration of habitat by humans and the introduction of nonnative aquatic organisms such as fish, bullfrogs, and crayfish into the waters that either prey upon or mate with native species as is the case of certain trout species.

There is so much work to be done to protect the habitats and the longevity of the many fauna of the Verde Valley.  When asked about her priorities for the Red Rock Ranger District, Janie responded, “The absolute priority of my job is to mitigate project effects on listed species and to consult with Fish and Wildlife Service on projects that may affect or adversely affect listed species and their habitat.  That doesn’t take all of my time, so my next priorities are protecting rare species habitat (riparian supports the highest number of special status species and our Oak Creek Watershed Restoration Action Plan calls for 9 essential projects that help protect rare species habitat along Oak Creek), but also improving degraded habitat conditions (such as removing junipers that have encroached into grasslands, controlling erosion, reducing the spread of invasive species [plants and animals] when possible, ensuring habitat and travel corridors are unimpeded by unnecessary fencing, etc.), and environmental education.”

For more information on the Verde Valley flora and fauna, Janie suggests going to the websites of the Coconino National Forest or the Red Rock Ranger District.  She also says that the Friends of the Forest offers volunteer opportunities that can get you up close and personal with many of the natural wonders of the Red Rocks