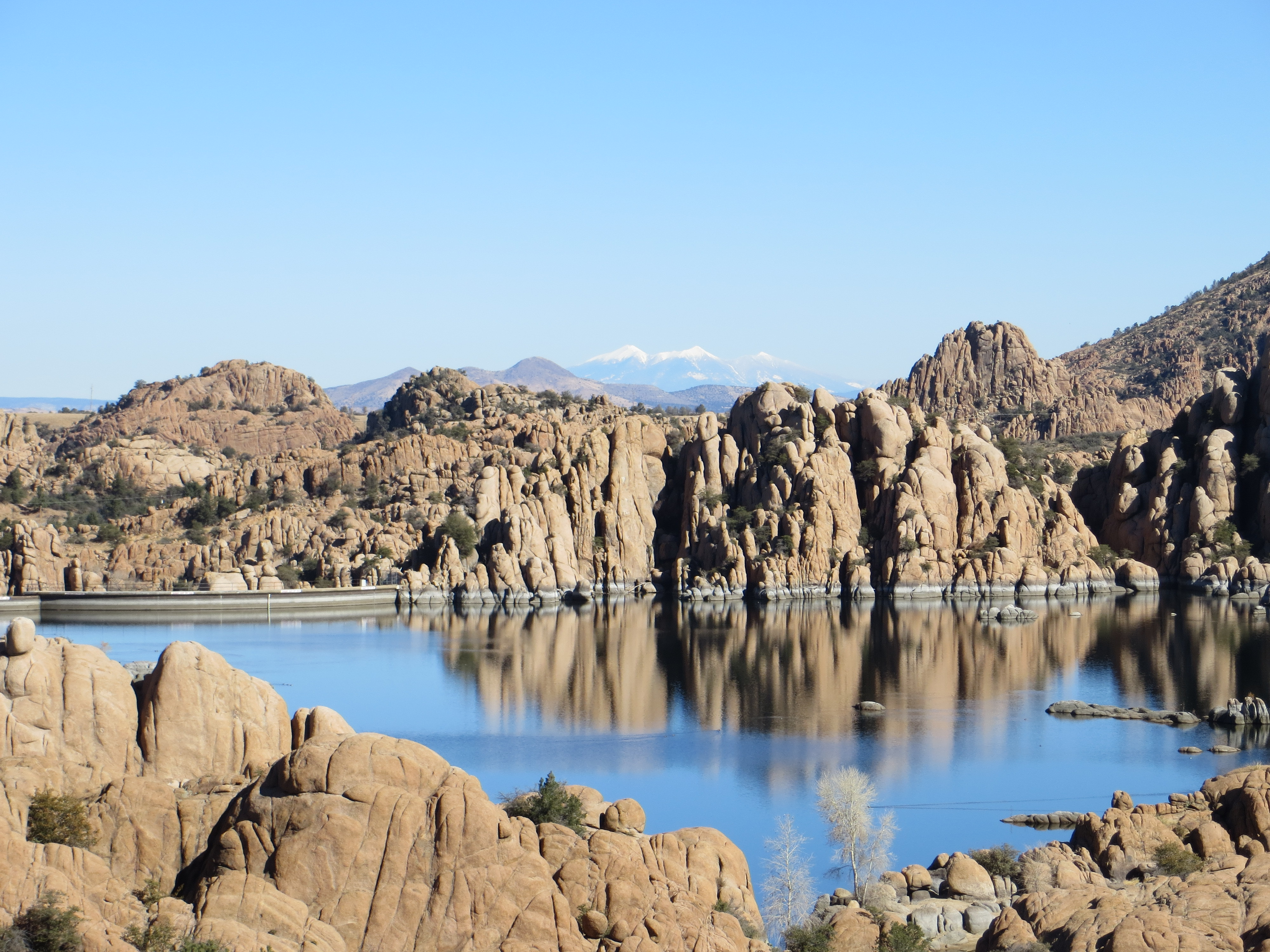 One of the first views the Westerners got on their recent Prescott Dells Hike. You can see the Dells, Mingus Mountain, and Humphreys Peak in the background.

“And now for something completely different”. We are off today to hike the Granite Dells in Prescott.  Our day started well as we formed up early in Cottonwood, broke up into carpools,then convoyed through Jerome. The town was busy even at this early hour.

Drivers then woke up quickly as we negotiated 127 curves in 12 miles, driving over Mingus Mountain and down into Prescott. Throughout this trip I kept telling myself, wrongly, that this is what jeeps are made for?

Happily it promised to be a sunny and warm day, good for the Sedona Westerners Dogie group of hikers.  In the parking lot as we learned we would hike on granitic rocks that were 1.4 billion years old, five times the age of our Sedona rocks and a quarter of the age of the earth.  We left dusty red foot prints (a legacy of Sedona) on these lightly colored rocks as we began our hike.

After a short scramble we stopped at a wide spot on the trail overlooking Watson Lake.  It was a very scenic spot and we took yet another dam picture while politely listening to yet another geological lecture.  We learned we were standing on an intrusivepluton formed miles beneath the earth’s surface, part of an Island Arc system, where an oceanic plate slid beneath another oceanic plate. We also learned that although Sedona basalt and granite are both igneous rocks, they differ significantly in chemical composition, texture and of course in color.

This area is heavily, orthogonally jointed which results in the unusual and picturesque surface pattern of the rocks that we see today.   The joint system is at right angles to each other resulting to rectangular and square blocks of granite varying in size depending on the intensity of the fracturing.  Water then works its way into the joints widening them and with the addition of wind and chemical action the rock erodes breaking down at the corners first.  The end result is the rounded towers and boulders, some of them quite high and large.

Because of the way the granite erodes the surface of the rock is much easier to walk on, the soles of the boot grab quite nicely.  However, due to the course grained nature of the rock the final debris on the trail is quite loose and slippery slowing us down.  As we hiked, we noticed that the granite was not always uniform, it was occasionally cut by 6 inch wide pegmatites made up of well-developed coarser grained crystals composed of mainly quartz, feldspar and mica.

The trail rises and falls opening into small valleys that surprise us like minor Shangri-La’s.  There is often running water along the valley bottom, thus causing a vista of green and a density of local vegetation.  The clustered and weathered stacks of unaltered granite are named woolsacks.  Those that have tumbled and fallen are referred to as corestones.  One of the most noticeable features of these rocks are the prominent and well defined Liesegang blocks which are iron rich rings patterned around the fractures occurring throughout the dells. The rings are red in color, one to two inches in thickness and are bound by the fractured block.

Having often being described as such by fellow hikers, it was easy for us to take the “Over the Hill” trail east across the dells.We then hiked SW along the lake to the now “not so secret” Secret Cove.  Here we stopped in this beautiful area for lunch.Unfortunately, the Canadian onslaught (leader) we had been experiencing on this hike did not stop as we were visited by a migrant goose.  This goose was uncharacteristically not Canadian as it was unapologetically aggressive and we had to watch our food carefully.

There was one more technical lecture as the geologist reminded us that the granitic rocks forming the Dells contain a high percentage of uranium resulting in high levels of radon.  If we sat in this windless area for a week we would be exposed to enough radiation to amount to an X ray.  If we sat here for twenty years we might develop a cancer.  Words to help our digestion.

Now conscious of the radon danger we quickly returned along the beautiful and scenic pathways, following the white dots,keeping our head out of gas collecting holes in the rocks.  It was a great hike and was indeed something completely different.