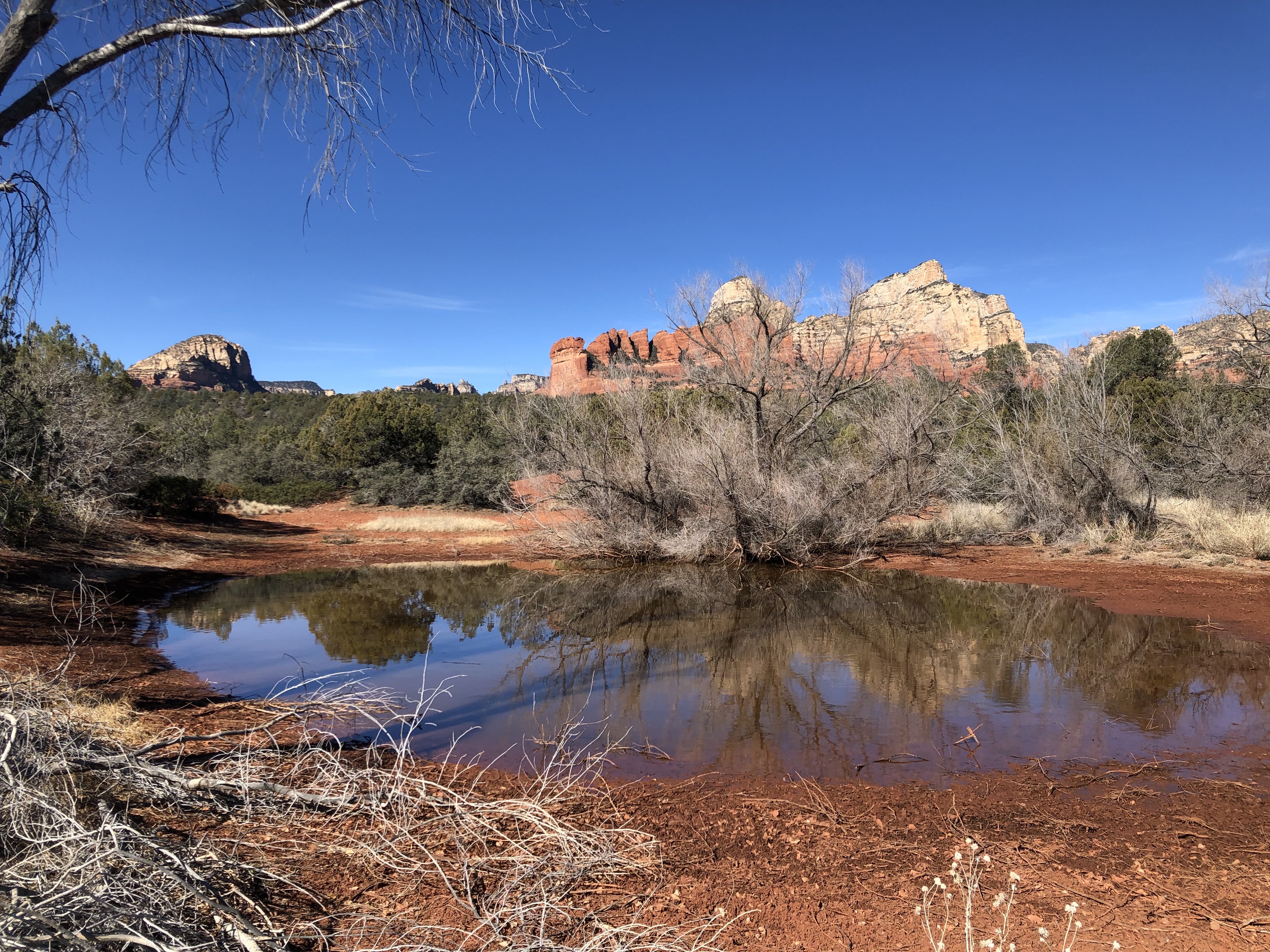 Earlâs tank is a short walk from Earlâs cabin. It is often wet and hosts many animals as evidenced by their trackâs at waterâs edge.

It’s not often that you find a good fixer-upper on over 40 acres in West Sedona, especially located right on a golf course.  On one of their recent adventures, the Sedona Westerner Dogies did just that.  The property, unfortunately, was not for sale.

After meeting at the Posse Grounds, reviewing the hiking safety rules, and reviewing COVID protocol, the Dogies carpooled to minimize the number of cars at the trailhead.  This morning’s hike started out at Long Canyon Trailhead, or what is affectionately known as the “mud puddle.”

The drive took us past the construction at the new Mescal Trailhead.  It was exciting to see most of the earthwork done, the new bathroom facilities in place, and the way they have fit parking into the hillsides.  The Forest Service confirmed that paving was not far behind and that the facility should be open in late March.  It will be a fabulous alternative for those wanting to use Long Canyon, Chuckwagon, and visiting Devil’s Bridge.  This morning, however, it was the mud puddle for us.

Our intrepid leaders were Clint and Louise Gelotte, each taking a group for this morning’s expedition.  The hike was to be an out and back on Chuckwagon Trail with a little loop at the end using the Van Deren Cabin Trail. By the time the day was done, we had travelled just over 7 miles and gained over 900’ of elevation.

The walk out Chuckwagon was a typical beautiful winter morning, with blue skies, light winds, and warming temperatures.  It was soon time to stop for clothing adjustments and a brief snack.

At the intersection with the Van Deren Cabin trail, we made a left and headed up the hill.  Several of the group had never seen Earl’s Cabin before, so it was a surprise to them as we approached the two structures connected by a breezeway.  What was really surprising was that this was, indeed, golf course property as you could hear the occasional “thwack” as someone hit a ball on the adjacent driving range.

There is a great historical marker at the base of the south cabin, also known as the honeymoon cabin.  The other cabin is known as the kitchen.  Per the historical marker, the 40+ acre homestead was originally settled by Bill Fredericks, who sold it to Earl Van Deren in 1924.  Earl was a cattle rancher, and supposedly made his living rounding up wild cattle in the area.

Sometime in the next five years, Earl moved the north part of the cabin down from its original location in Sterling Canyon, and then added the honeymoon cabin for his new wife, Leah, in 1930’s.  At some point in the 1950’s the family left the area and purchased a ranch near Dillon, Montana. After Leah’s passing in the late 1970’s, Earl moved back to the Red Rocks, fell in love again, married, and eventually passed away here in Sedona.  He is buried at the ranch in Montana.

Looking a little less worn at the time, the cabin was even the backdrop for several movies.  The 1941 version of “Riders of the Purple Sage” and the 1948 version of “Blood on the Moon” were both filmed here.

Given that this is Sedona, and that there are many different versions of its history, several of the Westerners added additional color to the cabin’s mystique.  Although they were unverified, we heard tales of Earl’s childhood, how he purportedly proposed and lured his future wife to Sedona, and how his brother used a similar ploy.  Whatever truly happened, I am confident that the truth contains fascinating stories and are stranger than any fiction we can imagine.

Leaving the cabin, it was a short jaunt up to Earl’s tank, which was glassy smooth this morning with beautiful reflections on the water of the red rocks in the background.  It was evident we were not the only visitors, as there were hundreds of various animal tracks in the mud along the water’s edge.

From there, it was a nice loop up to a stellar outcropping with views of HS Canyon, Lost Wilson, East Pocket, Brins Mesa, and the back of Thunder Mountain.  Although it was sunny and getting warm, a brisk cool wind blew in to leave a definite message that it was still Winter here in the region.

After lunch, and lounging on the rocks, it was back to the mud puddle and our cars as we retraced our steps on Chuckwagon.  There were only a few other hikers on the trail that day, which is pretty normal for Chuckwagon.  It always amazes me this very serene and peaceful trail sees very little use. Perhaps the new Mescal Trailhead will change that.