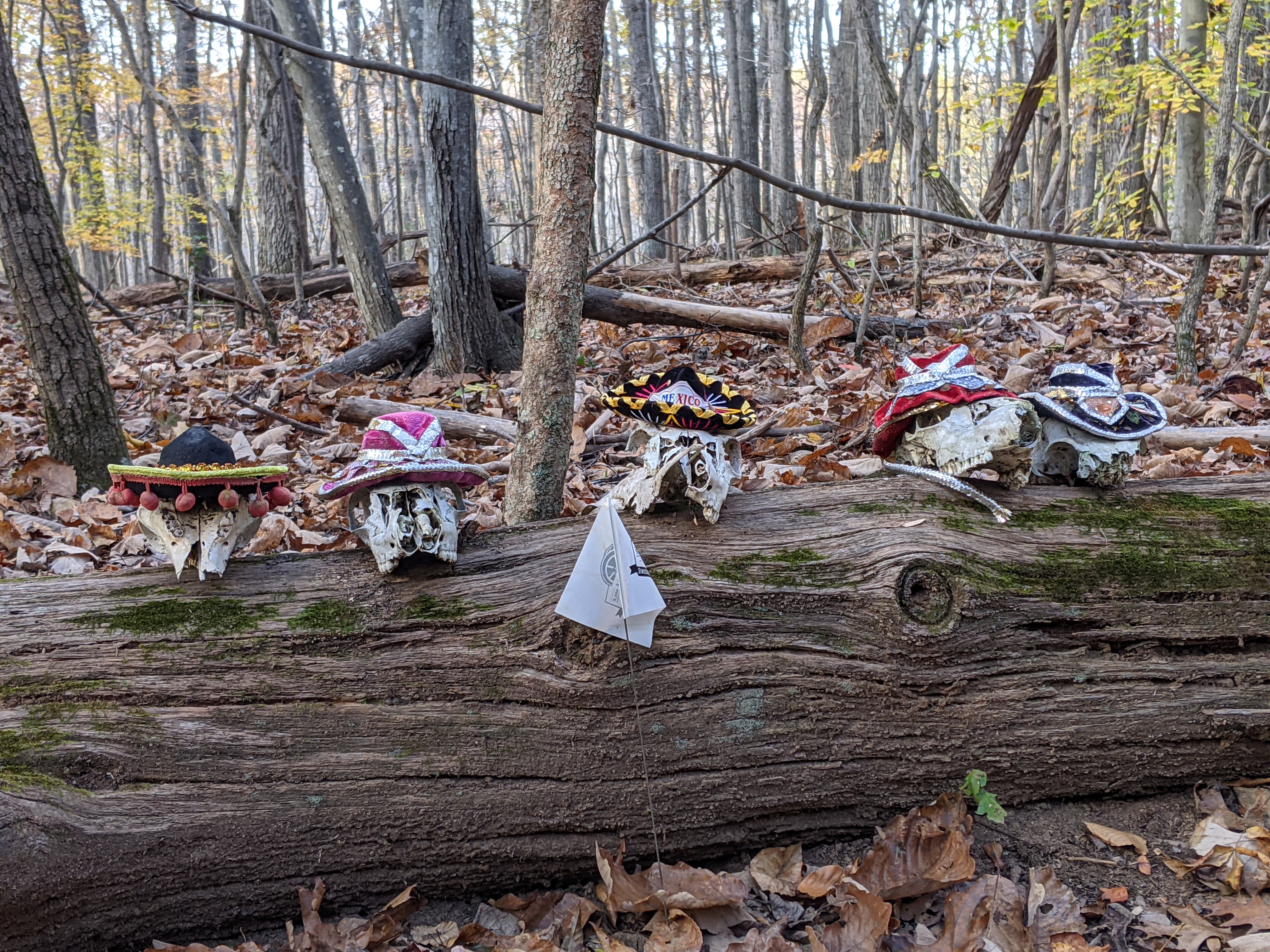 An interesting array of animal skulls adorned with little decorative hats that we understand have been in the woods of Maryland for a while.

In this week’s column we continue to explore the many interesting or unique things hikers have found on the Red Rock trails.  Our focus will be on people, or more appropriately people doing things.

Anyone who has spent any time hiking in the Sedona area has probably seen one of more of the following:  People practicing yoga, people dancing, flute players, wedding or engagement photo sessions, or meditation.  As we see below, however, there are many more unusual activities that go on.

Linda Archer reports seeing a young woman on a trail, barefoot and wearing just a thong bikini.  This rivals the people we see climbing Doe Mountain or other rocky and slippery trails with just thin-soled flip-flops.

And in the kids will be kids department, Karen Schudson describes the day she and some fellow hikers passed a group of youngsters that proceeded to moon them.  Not to be outdone, one of her group ran ahead and mooned the kids right back.  We are still trying to figure out the mature party here.

Dave and Joyce Minott recall an amusing incident while hiking on the Thunder Mountain Trail.  Upon reaching a wide expanse of flat, Red Rock ledge they encountered a group of about six middle-aged women reclined on their yoga mats with all of their gazes fixed upon their young, buff instructor standing above them.  He was bare chested and wearing tie-dyed bloomer pants.  As they passed, Dave heard the instructor pronounce, in a very confident tone, “And now I’ll teach you ladies how to achieve your alternative reality paradigm!”.  Only in Sedona.

Several years ago the Roughrider group was on a hike near Rabbit Ears.  As they went around a bend in the Red Rocks, smack dab in the middle of the trail was a naked young couple whose passion had gotten the better of them.  Seeing a dozen hikers staring at them, she let out a scream and ran for the nearest cover of trees.  The young man, trying to look nonchalant, gathered up the clothes and sauntered barefoot through the brush to join her.  The hiking group agreed it was the BEST HIKE EVER!

There have been two sightings of unicyclists recently.  On a scouting mission for a nine trail hike in the Village area, Kristine Mclean and Cleo Duardo were taking a well-deserved break on top of Submarine Rock when suddenly they were wondering if the circus had come to Sedona.  Four unicyclists were coming up the back side of the rock and proceeded to have a great time laughing and riding all over the rock.  The clincher?  Two of them were dressed like clowns.

In a tamer sighting, Sandi and I saw two unicyclists on Hangover Trail.  They were about to tackle the lower part of the saddle.  It is hard enough to hike parts of Hangover, much less do it on a unicycle.  We heard of no major injuries that day so we assume they made it safely.

There is, unfortunately, also tragedy in the Red Rocks.  Several years ago, on a hike to scout a new trail, Deborah Losse came upon a dead body. While one person in her group called 911, another headed back to the trailhead to guide the firemen into the location.  They then watched crime scene tape put up around the area.  Much shaken, they all went home to process what just happened.  Upon returning later in the day, they saw Search and Rescue removing the body.  Needless to say, it was a very upsetting experience.

About a year later they saw the Forest Service personnel, who thanked Deborah and her group for their help and said they had done the right things.  Call 911, don’t disturb anything, help the rescuers locate the site, and stay out of the way.  A good learning for all of us.

Many people ask what Westerner hikers do when they aren’t hiking here in Red Rock country.  The answer?  They hike elsewhere.  This week’s photo is from Chip Fleming and was taken in November on a State Park trail in Maryland.  It shows an interesting set of animal skulls, adorned with little hats, lined up on a log.  Perhaps it’s a trailer for the next Quentin Tarantino movie.

One thing that I hear is never seen are leftover cookies when Bob Dannert brings his homemade cookies.  I hope to try them some day.

Several Westerners commented that the most amazing thing they encounter on the trails is the large number of hikers in the 70-80 year age range.  These folks, despite new knees, hips, and other body parts,  adeptly traverse the rocks, ruts, roots, and slippery hillsides.  The general sentiment seems to be that you don’t stop hiking when you grow old, but you grow old when you stop hiking.