The Mustangs hoof it on Grandview Trail to Horseshoe Mesa 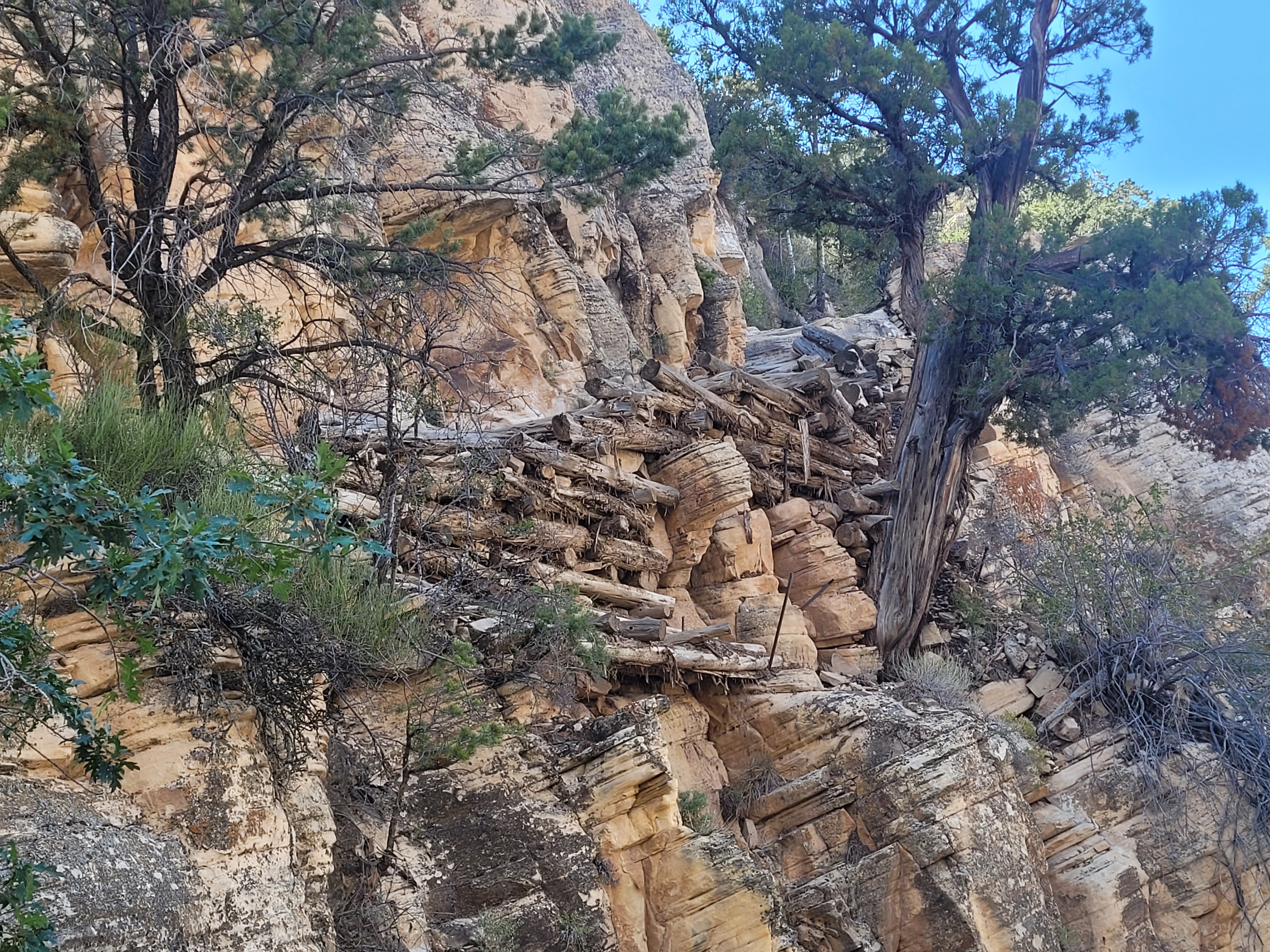 Most photos of Grand Canyon show the grandeur of the landscape, often not showing the trails that were forged long ago. This picture shows the intricate log structures built to support the trail to Horseshoe Mesa.

On September 30, the Mustangs of the Sedona Westerners hiking club set out from our meeting place behind the outlets in the Village of Oak Creek to begin our journey to Grand Canyon National Park.  Our plans were to hike the Grandview Trail to Horseshoe Mesa and back.  After meeting at 6 am, we signed our hiking waivers, reviewed our hiking rules and Covid-19 protocols, and began the 2 plus hour drive to the Grandview trailhead.  Our travel route went up Hwy 17, onto Milton Road in Flagstaff and continued onto spectacular Hwy 180 to the Hwy 64 junction.  Highway 180 was chosen because of its beauty as a drive as it passes in close proximity to the San Francisco Peaks and goes through a spectacular pine forest at an altitude of 8400 feet.  From the road you can see the massive stands of aspens on the Mount Humphreys/Agassiz shoulder as well as portions of the incredible geologic wonder of Red Mountain.

Upon arriving at the Grandview Trailhead, we took time to take in the incredible view prior to our hike.  At the bottom, 5 miles away, we saw the darkened abyss of the Grand Canyon including several bends of the Colorado River.  We were also able to clearly see our destination goal of Horseshoe Mesa, which was 3.25 miles via the trail and 2600 feet below us.

This steep arduous trail was built by miners around 1890 to access rich deposits of copper ore.  The copper content of the Last Chance Mine located on the base of Horseshoe Mesa averaged about 20% copper and one specimen was 76% copper, winning a prize at a World’s fair for purest copper specimen.  As you might expect, transporting this ore to market was very difficult.  Eight to twelve mules per day would each carry 200 pounds of ore to the top of the trailhead.  It was then crushed and sent to market via the rail lines in Flagstaff.  This went on from 1890 to 1903, when the original owner of the mine sold out and turned to tourism, first using tent cabins but quickly followed by building the two story Grandview Hotel--which at the time was the finest in Grand Canyon National Park.  This all changed in 1901 when the rail line from Williams was brought to Grand Canyon Village 8 miles to the west.  Tourists could then take this train to the Grand Canyon rather than a 12 hour horse carriage ride from Flagstaff to Grandview.

After reviewing Grandview history, we began the steep descent to Horseshoe Mesa.  We were amazed at the construction of parts of the trail - often built from log timbers drilled into the rock.  Occasionally there were disconcerting gaps or holes in the trail where you could look between the timbers down hundreds of feet.  The first mile was very steep and was slow going, and hiking poles were required.  At this point we were at a saddle where we could see the massive Cottonwood Canyon as it traversed toward the Grand Canyon, as well as Hance Canyon and Horseshoe Mesa.  As we continued the hike, there were 15 rock slides and washouts, several of which were very extensive.  Extra caution and a high level of orienteering skills were required in traversing these to make sure we stayed on whatever part of the original trail remained.  This greatly increased the amount of time needed to safely proceed on our hike.  We felt sorry for some backpackers who were really struggling with route finding and safety.  We all agreed the Park Service should have had warnings at the trailhead about the difficulties of this trail due to the washouts and rockslides.

After 3 ½ long hours of careful downhill hiking we reached our destination of Horseshoe Mesa where we enjoyed lunch at a roofless adobe building which the miners used as their kitchen and eating area in the 1890s.

Well rested, we began the 3 ¼ mile 2600 foot uphill climb back to the top and our cars.  4 hours later, exhausted but triumphant we returned to Grandview Point exalting again in the spectacular view of the Horseshoe Mesa and the Grand Canyon below us.