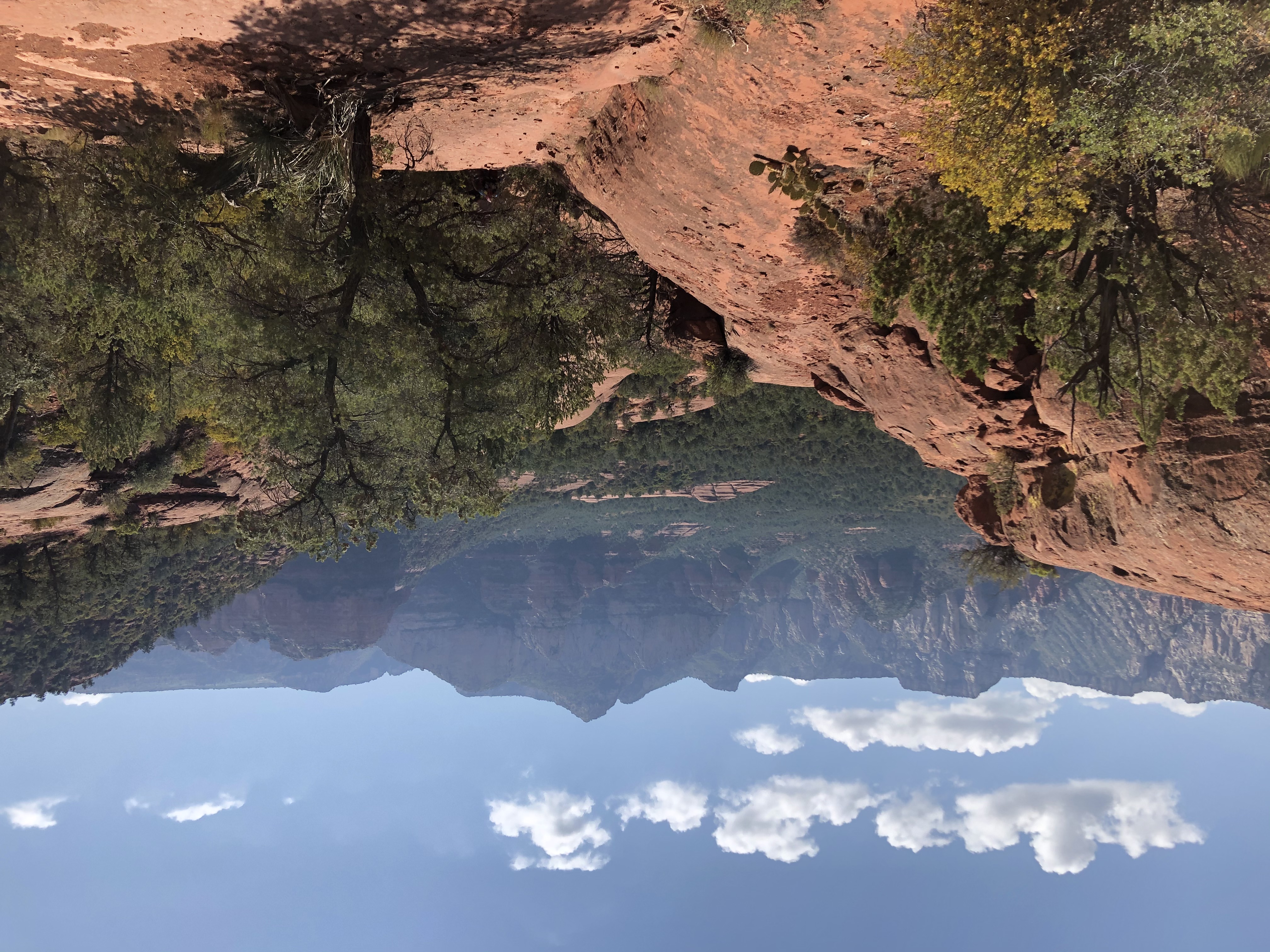 The Dogies take a pause near the Twin Buttes Saddle to view their next destination: Submarine Rock

The Sedona Westerners kicked off their 2021-2022 hiking season on September 7th with a wonderful tour of trails in the Twin Buttes area of Sedona.  We experienced not one, not two, but portions of nine trails on our 4 hour tour that covered 5.7 miles and over 850’ of elevation gain.

Anxious to get the legs loosened up and new boots broken in, we met at 7AM at the Mystic Trail Head on Chapel Road.  Dave Minott, this year’s Westerners Trail Boss, even got up early to come welcome us to the season and wish us a safe and enjoyable first hike of the season. Harry Strong, the Dogie Boss, took over from there, with a thorough review of the rules and hiking etiquette, including our current Covid 19 protocols.  Given that a handful of the intrepid hikers were new members, we also introduced ourselves.

As a real treat, we were joined by Sedona hiking legend Bob Dannert.  At 84 years old not only did he keep up with the crew, but several of us had to rush to keep up with him.  He has a wonderful knowledge of the trails, Sedona history, and most importantly hiking etiquette and experience.  His openness to share that with us made the time fly by as he shared interesting stories with everybody.

Cleo Duardo, our Hike Leader for the day, soon got us on the trail after a quick review of the route she scouted previously and some tips on how to traverse certain parts of the trail.  She was assisted by Ray LaPorte and Hassan Hosseini served as tailgater for the day…making sure we finished with the same 28 feet we started with. Special thanks to all three of them for their efforts.

The first part of the morning we spent in shade, warming up on a piece of the Mystic trail, connecting to a short section of Hog Wash, then making a right turn on Hog Heaven to start up the hill for our eventual connection to Twin Buttes.  Along the way there were beautiful scenes of Sedona waking up, the shadows becoming sunlight, and even a glimpse of the Sedona cemetery.

As we approached the saddle on the Twin Buttes trail, the sun and heat made their appearance, and would end up staying with us the rest of the day.  After a short stop up top to admire the expansive views, we headed down the other side of the hill, pausing to look at interesting swirl marks and channels formed in the red rocks many, many years ago.  At the bottom of the hill we hit Broken Arrow trail for a short section then proceeded to Submarine Rock.

Atop Submarine Rock we looked at a very interesting fault line traversing the rock at a diagonal, then found a nice shady spot on the west end for snack break.  Leaving there, we headed back up Broken Arrow to Chicken Point, marveling at some of the other visitors who were actually walking “The White Line”, which is the same white line that has become an internet video sensation with mountain bikers. Taking another break in some shade, we watched many tourists on Jeep tours get out and take pictures from Chicken Point.

With the last part of the hike upon us, we headed down Little Horse trail for a bit to where it intersected with Chapel Trail, then followed it all the way to the Chapel Trailhead.  From there it was a quick walk back to the Mystic Trailhead and our vehicles.  The Ocotillos along the Chapel Trail, with its mainly southern exposure, were absolutely glorious with their second green bloom of the summer.  Additionally, many of the prickly pears had beautiful deep red and purple fruit on them.

Everyone agreed it was a great way to start the season, with lots of discussion regarding the next hikes on the schedule.