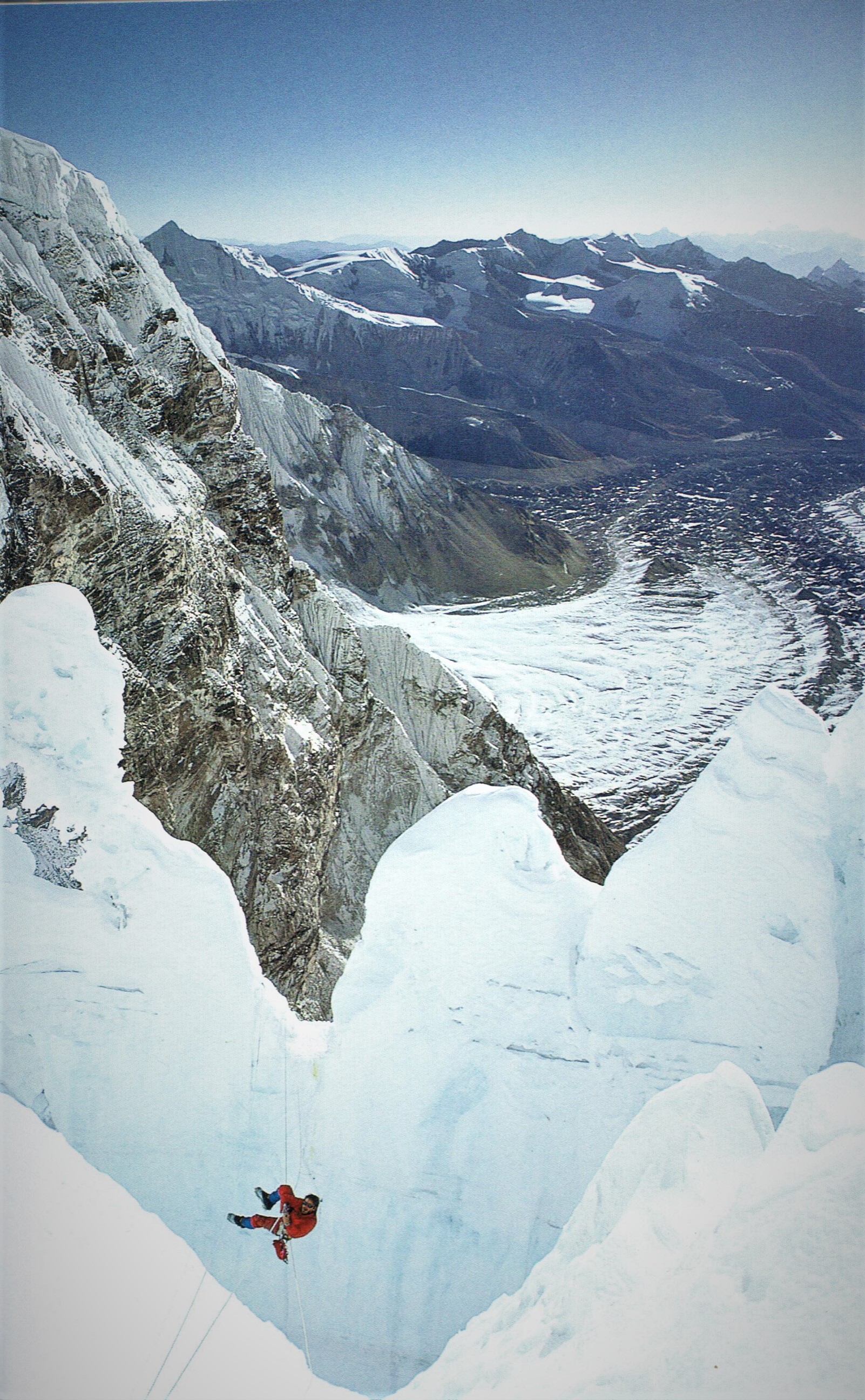 Courtesy of Stephen Venables Ed Webster, a world-class mountaineer and rock climber from New England, is shown in 1988 suspended in mid-air, ascending Mt. Everest via a major new route up the perilous Kangshung East Face in Tibet. The small team of four climb

Normally, this article would recount the highlights of a wonderful hike the Sedona Westerners completed recently.  Not surprisingly, we’ve had to suspend our hikes until the COVID pandemic eases.  However, the Sedona Westerners continue to hold their monthly evening meetings as virtual Zoom meetings.  Our monthly meetings feature a speaker who presents on a topic of interest.

This article is about a particularly captivating presentation by our recent speaker, Ed Webster.   First, a little background on Ed.  Ed Webster, a New Englander, is a world-class mountaineer and rock climber.  In 1988, Ed Webster made a daring climb of Mt. Everest via a new route, and in a traditional, ethical style of climbing that has made this ascent iconic in the history of Everest climbing.  Ed is also one of the best-known rock climbers in the U.S., having pioneered first ascents up numerous daunting cliffs, rock faces, and spires throughout the country.  He is also a gifted author, photographer, and lecturer.  Interestingly, Ed Webster’s world-class mountaineering feats earned him recognition in the board game, Trivial Pursuit.

As Ed Webster began his presentation to the Sedona Westerners, it didn’t take long before this audience of enthusiastic hikers was fully engaged.  Ed related how his mom got him a library book on Mt. Everest when he was 11 years old, and how reading that inspired his first rock climb at that tender age near his home, and eventually, his ascent of Mt. Everest.  By his late teens, Ed was already a highly-skilled rock climber, leading rock climbs of the toughest caliber.

Next, Ed Webster proceeded to surprise his Sedona Westerners audience with the revelation that, in his youth back in the 1970’s, he had rock-climbed on the red-rock spires right here in Sedona.  Ed showed black and white photos of those Sedona climbs, photos that seemed to harken from a long-past era. The color photo above is of Ed Webster climbing in 1976 on the Firecat Spire located in the Marg’s Draw area of Sedona.  In the 1970’s, Ed also pioneered a “first ascent” (a new climbing route) up the Mace spire of Cathedral Rock.

Ed then turned to his historic ascent in 1988 of Mt. Everest.   As a prelude to what was in store for us, Ed had titled his presentation, “Everest the Hard Way.”  Perhaps you have seen television footage of recent, modern-day ascents of Mt. Everest.  Typically, climbers ascend in large groups that can form bizarrely-long conga lines on Mt. Everest at pinch points.  These large groups are led by local guides (Sherpas) who also carry the hikers’ equipment.  In steep sections, the hikers depend on fixed ropes, installed previously as permanent climbing aids.  These hikers use oxygen bottles at high altitude, again carried by the Sherpas.  Such large groups of hikers sometimes leave their trash on the mountainside.

Ed Webster’s climb of Mt. Everest in 1988 purposely avoided this type of modern, “concierge” large-group climbing on Mt. Everest.  Ed explained how his ascent emulated the simple, classic climbing style of 50-100 years ago.  He related how his small international team of just four top climbers assembled to attempt a major new route up Mt. Everest’s remote, perilous Kangshung East Face in Tibet.  Astoundingly, this small international team undertook their audacious climb without any Sherpa support and without bottled oxygen or radios.  They carried all their own food and gear, keeping it to a minimum.

With captivating narration and stunning photos, Ed Webster then recounted their adventure climbing the new route – the perils and triumphs, periods of despair overcome through resolve, and how this tightly-knit team responded to life-threatening circumstances that arose.

Ed showed a stunning photo of a sunrise over Mt. Everest and surrounding peaks that draped those snow-covered peaks in breath-taking golden tones that are referred to as “alpine glow.”  He then narrated the team’s arduous and perilous climb up the dangerous Kangshung face, towards the summit of the mountain.   There were photos of avalanches roaring by just below where the team had pitched their tents high on the mountain for the night.  Ed presented a hair-raising description and photos of climbing inside a deep crevasse, as ice chunks the size of airplane wings crashed down from above.  There were also breath-taking photos of the team climbing up sheer walls of blue ice, and also climbers hanging suspended from ropes in mid-air, spider-like, over gaping chasms.

Ed then recounted how fear of death mounted quickly as the team reached the 27,000-foot elevation, where there is little oxygen, and the weather can be extreme. He told us about how the team of climbers huddled overnight in their tents on the high mountainside, with the temperature outside at -30o F and the wind blowing 100 mph.  They couldn’t sleep at all for fear of being blown off the side of the mountain to their deaths.  Then with the sun up, Ed couldn’t resist removing his gloves to take a dazzling photo of the mountains with his metal camera, despite the temperature being -30o.  Ed showed us the price for this indulgence, holding up his hands during the presentation to reveal eight missing fingertips and half a thumb gone.

Ed described the final climb towards the top, in which he reached the South Summit of Mt. Everest at 28,700 feet, but fell just 300 feet shy of the main summit.  Although that close to summiting, Ed said he sensed that “going for it” in his severe state of exhaustion would have meant death. Two of his team mates also stopped just shy of the summit, but one succeeded in reaching the summit of Mt. Everest via this fearsome new route.

Wrapping up, Ed described the harrowing descent from Mt. Everest by the team, which took four days, without any food, frostbitten, and with death stalking them all the way. The entire team made it down safely because of how ably the team members supported each other.

The 1988 ascent of the Everest Kangshung Face is often cited as being “the last of the great Everest expeditions and one of the most audacious mountaineering feats of all time.” This feat remains unduplicated over thirty years later, and Ed Webster’s account and photos of this legendary climb left his audience of Sedona Westerners in awe.