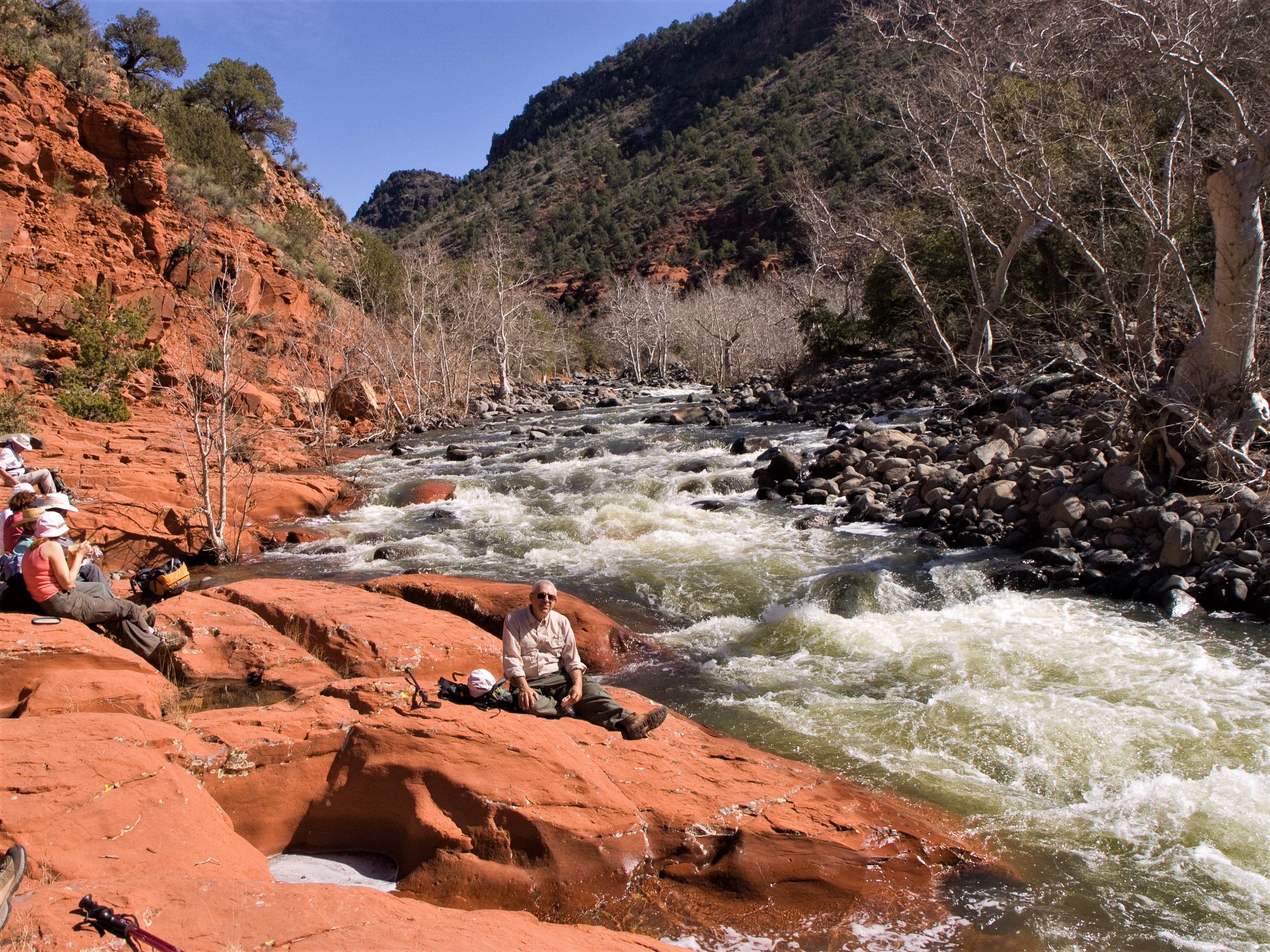 Photo Courtesy of Alan Gore Sedona Westerners Dogies rested for lunch 10 years ago in February of 2010 on the slick-back redrocks of Dry Beaver Creek in Woods Canyon. The normally dry creek and canyon bed were swollen from early spring rains and provided a spe

It was a perfect mid-February Tuesday in 2010 as the Dogies hiking group of the Sedona Westerners set out to conquer Woods Canyon. Though the trail up this normally dry canyon starts at the new Red Rock Ranger Station and Visitor Center and runs nearly the full length of Woods Canyon, this winter’s plentiful rain has found Woods Canyon and Dry Beaver Creek to be a convenient path to the Verde River. A wide pool has formed near the trailhead as the water wheels south after exiting the canyon. The regular trail was thoroughly blocked this season, so we opted for a more adventurous route, starting from the Jacks Canyon trailhead and coming over a saddle into the middle of Woods Canyon.

Our leaders on this trek were Andy Beeler and Gus Rousonelos with Hadji Hadji-Agha and Pearlina McCombs tailgating. This hike promised to be a seven miler with a significant elevation change.

The beginning of the trail ran through flat woodsy terrain behind the southeasterly Village of Oak Creek houses, but we soon turned steeply up the side of the saddle between the long Horse Mesa and the smaller westerly ‘island’ of Wild Horse Mesa, which takes its name from the 1928 novel by Zane Grey that has made three separate trips to Hollywood.

At the saddle we took our first break and here we already had a grand view of our destination. The Hot Loop Trail forked off east along the top of Horse Mesa, while we continued straight over the saddle into Woods Canyon. We could already hear and see a substantial flow of water.

Woods Canyon was named for Winslow railroad engineer Jack Woods, who grazed his sheep along Dry Beaver Creek in the 1880’s. The trail down the south side of the saddle into Woods Canyon was noticeably steeper than the VOC side. It didn’t take us long to reach the fast flowing wash. We hiked up-canyon until we reached the broad slick-rock plaza opposite the mouth of Rattlesnake Canyon. The trail after this point continued in the wash, so that was as far as we could go for the day. Rattlesnake Canyon, which joins the south side of Woods Canyon, is also normally dry, but that day it had become a substantial tributary, dividing into two streams as it met the waters of Woods Canyon. From our viewpoint on the natural steps of the open rock, we had perfect stadium seating. This turnaround point was an ideal place for lunch.

Lunch was our major chance to share stories. As retirees, for the most part, we of the Westerners have accumulated lore from an amazing variety of “former life” backgrounds. Some of us have been farmers and some of us have run the biggest auto plants in Detroit. We have a Secret Service agent who has personally known several presidents. We have authors, refugees, doctors, nurses, geologists and nuclear physicists. Sedona has called us from every part of the country, and many others beyond it. Many of us can impart specialized information about the places we have seen on our hikes. When you join the Westerners, it isn’t just for the exploration and exercise. You are joining a great conversation.

On this particular lunch stop, we could have used a mycologist. On this large slab of slick-rock we saw lichen we had never before encountered; perfect circles about two inches across with a small empty spot at each center. A large number of these things stared at us like the irises of eyes as we ate. What are they?