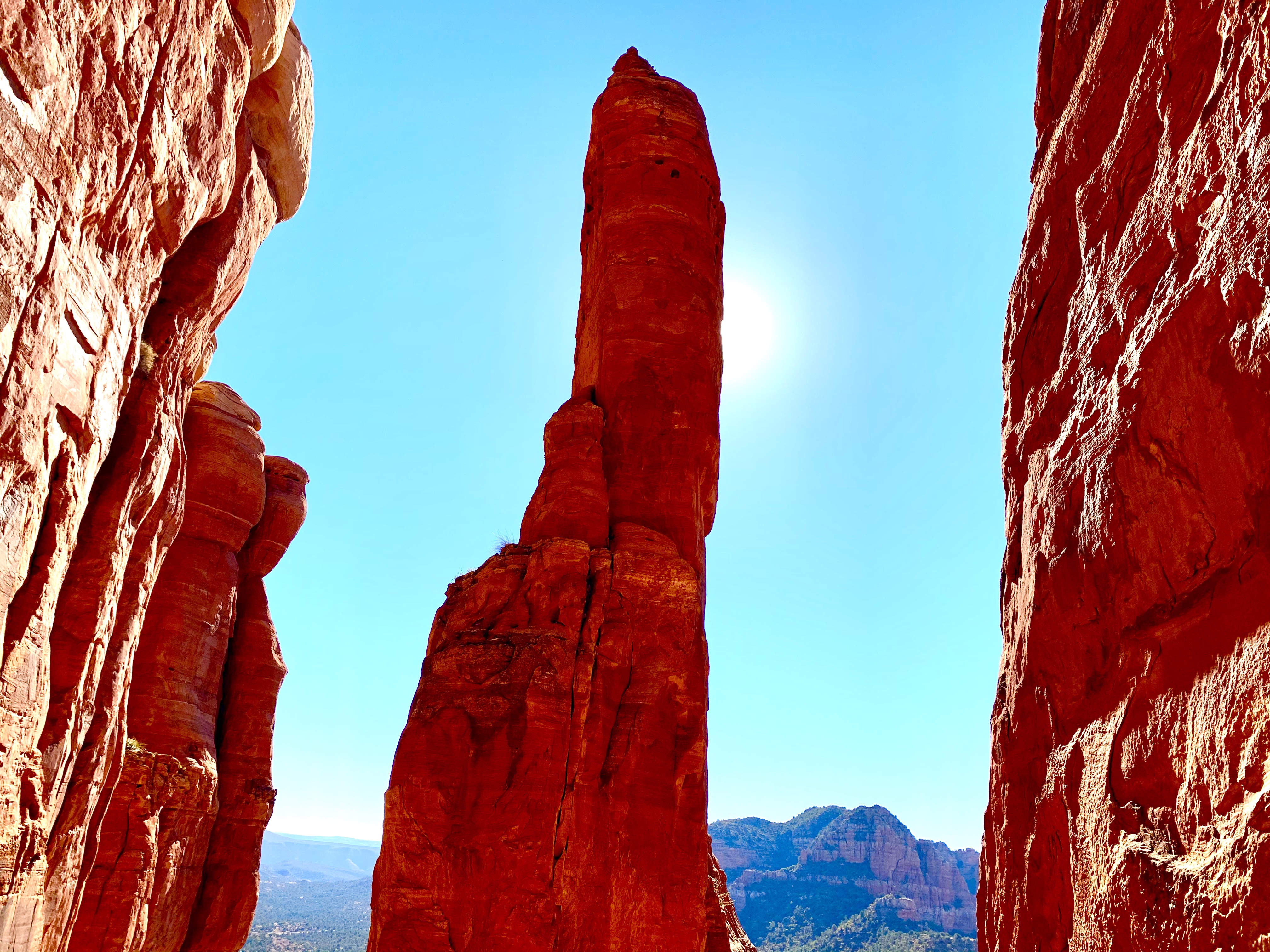 Photo courtesy of Harold Brockwell This amazing scene looking south into the sun was taken from a saddle-window in the very heart of the famous Cathedral Rock formation. Cathedral Rock has been considered to be one of the four major Vortexes in the Sedona area

The Westerners Mustangs met at 7:00 AM at the Baldwin Loop Trailhead on October 15, 2020, a gorgeous, sunny, and slightly chilly fall day. The Mustangs were divided into two groups under hike leaders Jim Sweeney and Terri Petrescu. The length of the hike was 5.2 miles and the elevation change was 1200 feet. The leaders gathered the two groups together and reviewed the Westerners’ hiking rules including new rules covering Covid 19 safety.

The main goal of this adventurous and multi-faceted hike was to circumnavigate Cathedral Rock in a loop hike and visit three destinations. First, to stop at the redrock formation locally known as “Napoleon’s Tomb” on the west side of the loop. Next, to ascend into the heart of the Cathedral Rock formation itself to the saddle and window which has amazing views both north and south and is also a major vortex energy center. And finally to stop for lunch on the beautiful red rock stream bed of Oak Creek near Red Rock Crossing. This circumnavigation of Cathedral Rock required the use of three major trails in the area: Baldwin Loop Trail, Hiline Trail and Templeton trail.

Leaving the trailhead along Baldwin Loop Trail, our group led by Jim Sweeney began the stepwise ascent of a ridge west of Cathedral Rock to the red rock formation known locally as “Napoleon’s Tomb”. The name was given because of the strong resemblance of the shape of this formation to the actual tomb of Emperor Napoleon Bonaparte in Paris, France. A short rest and snack break was taken here and several of our group took this time to scramble up on top of the formation for photos. This beautiful red rock ridge had more to offer than just Napoleon’s Tomb. It also presented an amazing scenic panorama of almost the entire Verde Valley and many of the other mountains and red rock formations surrounding Sedona. Another remarkable scene that could be enjoyed from this ridge was of several hot air balloons, floating along the Verde Valley like brightly colored Christmas ornaments, beautiful against the backdrop of green mountains and blue skies. The hot air balloons could only be seen because of the early start time for the hike and they were well worth it.

After Napoleon’s Tomb we followed the Baldwin Trail and later the Hiline Trail.  The Hiline Trail was a single-track one-way, mountain bike trail which was extremely steep and difficult in places. Our ascent in these areas required a scout going ahead to insure no bikes were descending while the group climbed up the trail. Our next ascent was a relatively short but steep ascent up the south slope of Cathedral Rock to one of the main saddles and window – to the very heart of the formation. Another break and rest stop was called here so the group could relax and take photos and meditate if so desired. Cathedral Rock has been considered to be one of the four major vortexes in the Sedona area and is said to be an inflowing or feminine vortex. I am certainly not knowledgeable about vortexes and their energy but each time I have stood in this very window looking south into the sun, I have always experienced an amazing feeling of peace and tranquility. It was not unusual that we saw several people in this window in various positions of meditation.

We exited the Cathedral Rock window and its vortex energy and descended steeply down to the Templeton Trail where we continued our circumnavigation around the east side of Cathedral Rock. After a while we intersected the Baldwin Loop Trail again and proceeded to Oak Creek for our scheduled lunch stop near Red Rock Crossing. Many of the group took photos or just relaxed on the dry sections of the red rock creek bed. A few bold hikers took a short invigorating swim in the cold water! This section of Oak Creek was shallow and wide and beautiful with a solid red rock bottom cut with long narrow grooves by the swiftly flowing water. High above the creek to the east loomed the massive red rock formations of Cathedral Rock, hovering over this delicate section of Oak Creek. Beautiful perfect reflections of that grand formation could be seen clearly on the mirror-like surfaces of the quiet pools. This location has always been a favorite for photographers for making awesome reflection photos.  In my travels I have seen wondrous scenic sights in many countries; but this idyllic place on Oak Creek has to be one of the most beautiful and serene places I have seen, not just in Sedona, but on this whole planet earth.

If you are interested in joining the Westerners club, please visit the Sedona Westerners website at www.sedonawesterners.org/membership. Monthly meetings are only facilitated via Zoom at present until the Covid 19 restrictions are lifted.