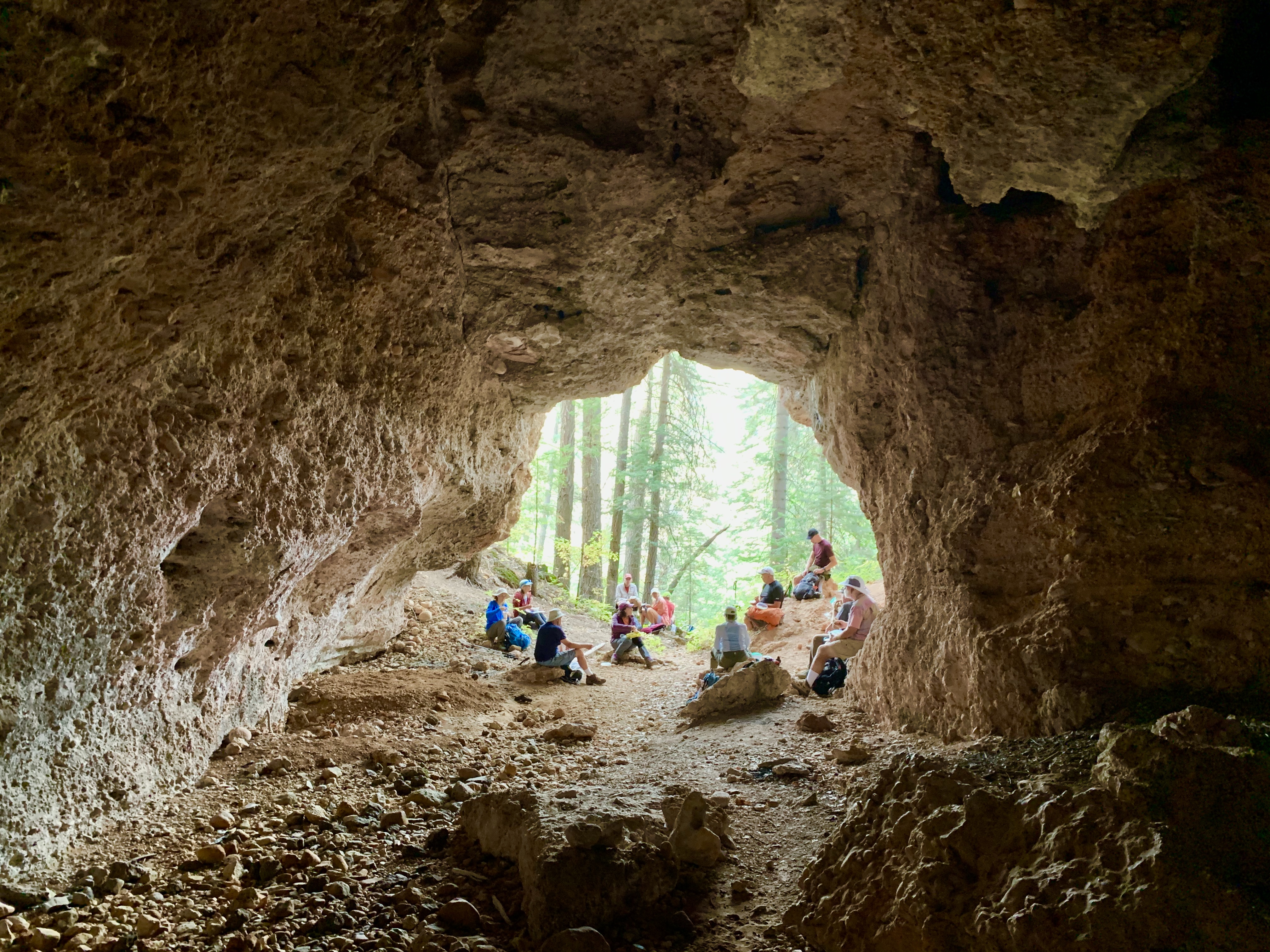 On Saturday, October 24, 2020 a group of Westerners, the Rough Riders, carpooled up Oak Creek Canyon to the Cookstove Trailhead near Pine Flats Campground to do a hike known as Grandma’s Cave. This hike required shuttling cars to two locations, at the start and end points of the hike, to meet the needs of a one-way hike.   As a lesser known hike to the group, this hike has often seemed mysterious; partly due to the not-so-clearly-defined trail in places, and also due to it’s seemingly camouflaged location. The hike started at the Cookstove Trailhead located just across Hwy 89A from a natural spring water pipe at the north end of Pine Flats Campground, and ended at the bottom of Telephone Trail #72 on highway 89A near an Oak Creek Fire Station. The hike totaled 5.5 miles and approximately 1300 feet of elevation gain.

As the group started up the trail, it was noted that there was a bit of a chill due to the lack of sunlight at the bottomof the canyon. But as we climbed up the trail, everyone warmed up and about half way up at a beautiful vista point, many began shedding layers of clothing. From this vista point we were able to take photos both up and down Oak Creek Canyon and of the many amazing rock formations on the west side of the canyon. The sunlight coming over the top of the east canyon rim provided some spectacular views. We continued the climb, about a 700 foot ascent, until we arrived at the top of the east canyon rim. There we were greeted with a beautiful forest of Ponderosa and Pinion Pine Trees and the sunlight streamed down through the pine needles in a celestial display of light. The trail at this point was not so well defined, but our diligent leaders, Randy Dent and Gini O’Brian, used their GPS’s to guide us through the pines and along the edge of the canyon until we arrived at the Harding Springs Vista. Again we had great views up and down Oak Creek Canyon and across the canyon to the West Fork Canyon area. It was here we were given a short snack break and reminded to practice distancing due to theCovid-19 virus.

The next section of the hike was as they say, “Just a walk in the park.” We came across several old logging roads that gave us an easy path through the forest. After a while we came close to the edge of the canyon and finally started down the steep side of the canyon toward Grandma’s Cave. Our descent took us down what became a rocky, narrow ridge with beautiful rocks and trees that seemed to flow down both sides. The fall colors were quite impressive; bright red leaves of the Maple trees, golden orange leaves of the Gamble Oak trees, and the light yellow leaves of Cottonwood trees, all mixed into a colorful forest mosaic. We continued down the rocky ridge that got steeper and rockier and eventually we climbed down off the rocks onto a path that lead to the mouth of Grandma’s Cave. Everyone’s initial reaction was surprise at how big and deep the cave was.

Armed with either a flashlight or headlight, much of the group started into the cave to explore. Within about 50-60 feet inside, there was complete loss of light and the side walls narrowed, and there was almost total darkness. At one point we had to crawl over a huge rock partially blocking the way. That led us to a larger corridor and then to what appeared to be the end of the cave. One of the elder hikers suggested we do a traditional Westerner practice of turning off all lights and remaining silent for several minutes to really experience the total darkness and isolation of the cave. This was followed by some joking and scary like: ”Let’s get out of here before it caves in!” and “Did you hear that rumbling sound up above?”. Immediately lights were turned on and there was a quick exit back to the mouth of the cave.

We took a 30 minute lunch break at the mouth of the cave and had many conversations about caves. The story goes that Grandma’s Cave was named after Grandma Thompson from the 1920’s who lived below the cave in Oak Creek Canyon. The temperature in the cave remained quite cool and stable throughout the year, so Grandma Thompson would

store all her fruit preserves in the cave after harvesting and canning. This was only one example of the rich history of Oak Creek Canyon, which was one of the first places in the Sedona area to be settled in the early 1900’s. By this time, the group had time to eat and chat and become familiar with the new members on the hike.

So we retraced our steps and climbed back up the rocky ridge and intersected the Telephone Trail #72. The Telephone Trail descended down another rocky ridge, connected to a second rocky ridge, and then descended down to Highway 89A. Along the way we stopped at a rock formation that had window-like holes. Some members were able to climb through the holes and take photos with their faces in the windows. Yes, just a bit of nature’s magic for all at this spot. We continued down this second ridge and soon we could see the old, decaying wooden poles that were the remains of an old telephone line that came up from the bottom of the canyon to some destination point at the top. This explained the naming of the trail and presumably how it was originally used. Once we were all gathered down at the Telephone Trailhead, we sent the vehicle drivers back to the Pine Flats Campground to drive the rest of the vehicles back. They could then pick up their passengers and head back to Sedona.

On this particular day Hwy 89A traffic was very busy, especially that close to West Fork Trail. So we all carefully crossed the road and met at the ‘Brown Bear’ landmark near the Fire Station. While we were waitingfor our rides, there was much discussion about how interesting the hike was. Many expressed a desire to return at some time to do further explorations of the area. Others commented that at a time of serious pandemic restrictions, it was so refreshing to be able to get out and hike with other hikers in such a beautiful place.