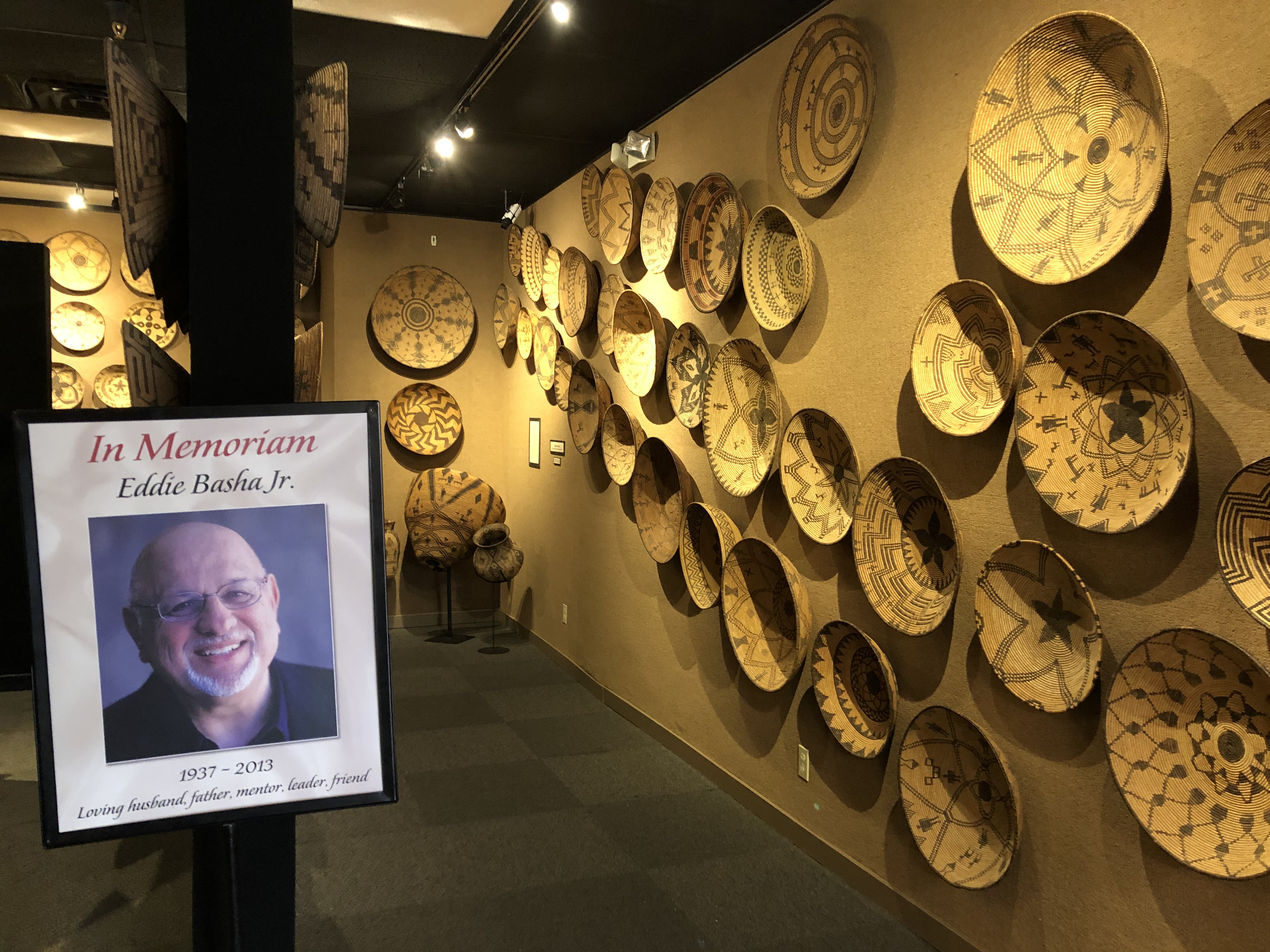 The Sedona Westerners offer hikes for a wide range of abilities, from Amblers to RoughRiders.  A very special type of experience is the Tracker hike, which has a more educational focus.  These hikes could target geology, history, archeology, or culture.

One such Tracker hike took us to the Eddie Basha Collection of contemporary western American art and contemporary American Indian art, located at Bashas’ Corporate Office in Chandler, Arizona.  Basha combined his passion for history and art when he began collecting in 1971, forming life-long friendships with many area artists.  The Zelma Basha Salmeri Gallery, named to honor his Aunt Zelma, opened in 1992 and has undergone numerous expansions to house and best display the over 3000 pieces, including paintings, sculpture, wood-turned bowls, basketry, pottery, katsinas, and jewelry.

My husband and I started our tour in the Basket Room.  The largest portion of the collection are Apache baskets woven between the late 1800’s through early 1900’s.  There are also baskets from the Pima, Yavapai, Navajo, Chemehuevi, and Mission Baskets tribes.    Originally purely utilitarian, they are now revered for their beauty.  Some baskets came with personal stories, such as the basket given to Cordelia Crawford, who, while not a doctor, functioned as a pediatrician to the Apache.

Another very interesting aside pertains to a certain pattern used in the basketry.  The Whirling Logs is a symbol of the link that preserves sacred medicine and traditions.  Unfortunately, the symbol resembles a swastika, and the Navajo were forbidden to incorporate the symbol into their art during the 1930s because of the association with Nazi Germany.  Whirling Logs are seen in the basketry of many Indian tribes, as well as the Hindu, Buddhist, Chinese, Greek, Roman, and other cultures, long before it acquired a negative connotation.

Entering the main gallery area, we proceeded along the lengthy hall displaying more than twenty paintings and forty sculptures by Joe Beeler.  Beeler, a founding member of the “Cowboy Artists of America,” lived and created his art in Sedona.  Basha’s and Beeler’s friendship began in 1971 when Eddie stopped at Beeler’s house, had a snack on the back porch while enjoying the Sedona views and ignoring the fact that the Beelers were not at home.  Basha entered the unlocked house and was immediately impressed with the art that he saw.  On his way home, Basha called Beeler to say how much he admired his work and how much he enjoyed the Beeler’s hospitality.  Joe responded that he and his wife were still cleaning up their mess. After apologizing, Basha indicated his desire to purchase some of Joe’s bronzes.  This was the beginning of a long friendship, and the dominance of the Beeler works in the collection speaks to the strength of that association.

Next, we encountered some large oil paintings by John Clymer.  They depicted, among other subjects, the journey of Lewis and Clark, the journey of artist George Catlin, and the rugged western life of cowboys, Indians, and fur trappers.  Some of the paintings were very educational in that they realistically depicted the everyday rugged life of the frontiersman, setting up simple camps, tending to the well-being of their animals, and fending off threats from predators in order to get their products to a trading point.

As time was running short, there was a quicker perusal of Bill Owen’s paintings, old rifles, pistols, and manzanita wood sculptures by Bob Boomer.  There is much more to the collection than we covered in this visit.  This exhibition could be visited numerous times without being repetitive.  As a matter of fact, many in our party were return visitors.

The Basha collection is typically open Monday-Friday, 9AM to 4pm, and is closed on weekends.  There is no admittance charge, but they do advise calling before coming (480-895-5230, option2), as there are occasional closures.