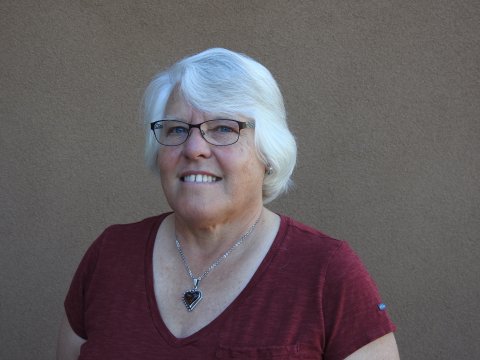 Terri Petrescu is our new Sedona Westerners Trail Boss (President) for the 2020-2021 hiking season. Terri considers it to be an honor to be the Trail Boss in 2020 because it is the 60th Anniversary of the Westerners and it promises to be a pretty special year.  It is unfortunate that we cannot meet as a whole group to celebrate.

Terri was born in Jacksonville, Florida where her dad was attending flight school in the Navy. So, Terri was considered to be a “Navy Brat”. By the time she was ten years old, Terri had been in 46 states! Terri’s grandparents were from a tiny rural town in Nebraska. She never lived in Nebraska herself, but she spent summers there working on the farms, and it was always a home base as she moved around. Terri’s grandfather lived to be 105 years old and only died a few years ago. Terri was surprised to find she had some family history connections in the Westerners. Bob Dannert of the Westerners was a classmate of Terri’s father in Nebraska! What a small world.

Terri went to school in five different states: Colorado, Texas, Washington, Rhode Island, and California. She graduated from Coronado High School in California. After high school Terri attended the Univ. of California in San Diego, then went to Bristol, England for her fourth year of college on a Rotary Club Scholarship. She ended up with degrees in both Mathematics and in Computer Science.  Terri started off her career being a “Software Engineer”.  She worked at ORINCON, a small company.  One of the projects that she enjoyed was developing a system to detect and track submarines via active and passive acoustics.  She related that it was similar to what the character “Seaman Jonesey” did in the movie “The Hunt for Red October”. It was at this time that Terri met her husband Jon. She and Jon have been married now for 28 years.

Terri eventually went on to lead engineering projects for various customers.  Her last program was building a software radio system that was to be used by all of the different Armed Services on airplanes, helicopters, boats, ships and aircraft carriers.  Everyone wanted a different set of requirements and functionality, so eventually the government terminated the program because nobody could agree.  As a result, Terri got laid off and retired to Sedona. She said this was one of the best things to happen because she got to retire early.

Terri does not consider herself especially as a strong sports person but she does like to hike, bike, kayak, sail, and work in her garden. She likes activities she can do with others but also by herself.  She lived in San Diego for 35 years.  She loves to travel, and has been to many different countries.

Terri’s second visit to Sedona was with her husband-to-be Jon. After she and Jon spent a 3-day weekend here, they agreed and said “Let’s go buy a lot.” So they bought a place to build a retirement house here before ever buying a starter house; kind of backwards from the normal way. Terri and Jon moved here permanently eight years ago.

Terri’s association with the Sedona Westerners began after their permanent move to Sedona. Terri was asked to lead one of the hiking groups but she waited until she and Jon sold their sailboat before making the commitment. They had been sailing four months each winter during the hiking season. Terri agreed to lead the Drovers and then the Dogies and then agreed to be Wagon Boss (Vice President). Terri then became Trail Boss (President) in March of 2020 when President Scott Mcfeely moved to Florida.

So Terri took over as Trail Boss three months early and right in the middle of the Covid 19 Pandemic! Terri’s first duty as president of the Westerners was to cancel the rest of the hiking season and the annual picnic. But Terri didn’t waste any time nor give in to Covid 19. She formed a committee and set up some new hiking rules and regulations to deal with the Covid 19 dangers. The committee set up rules regarding the safe use of masks and distancing for the hike groups. In October the Westerner’s hiking season was opened and in Terri’s words “We have had a good run so far:” Terri’s season goal is to have all the fun we can under the circumstances.

After Terri’s term as Trail Boss she plans to continue with the Westerners and provide her experience and help in every way. Outside of the Westerners activities, she will continue to be active in Friends of the Forest.  She has helped as a docent at Palatki Heritage Site, worked on trail maintenance and graffiti removal, and helped the Forest Service wildlife biologist.  In addition Terri and Jon currently head up the Trail Patrol Program for Friends of the Forest.

Terri’s favorite trail? She doesn’t really have one. Her favorite trail is the one she is on or the one she just finished! She loves Bear Mountain and other challenging hikes including Wilson Mountain, hiking to both overlooks. She also loves backpacking, including trips taken down into the Grand Canyon, Havasupai Falls, and Grand Gulch. I loved the interview with Terri; her energy, enthusiasm, and love of life.