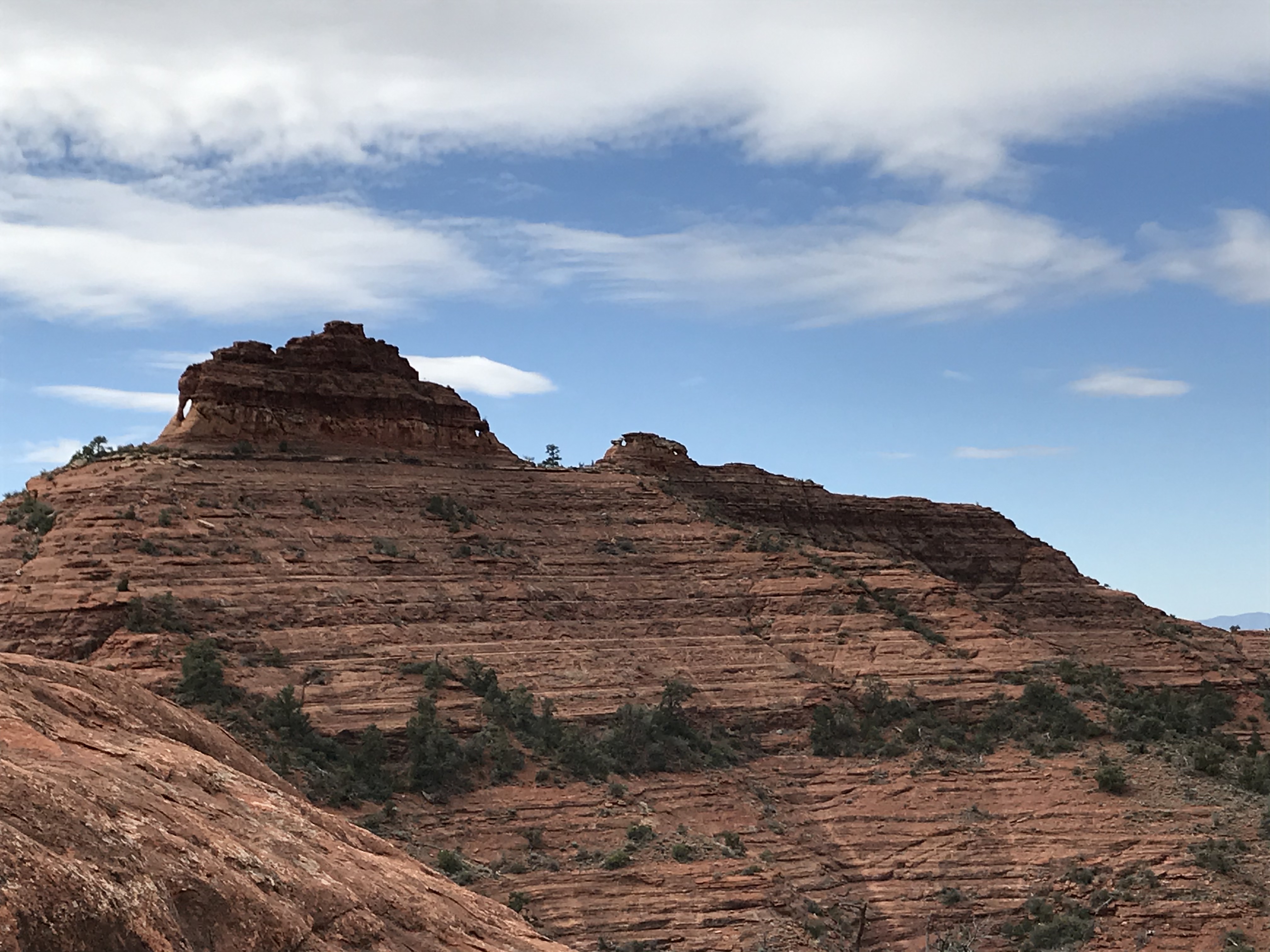 A view of the elephant's trunk from Hangover trail

On our “hangover” hike, we learned there is nothing disagreeable or a letdown about the Hangover Trail!

On a sunny Sunday morning, the Drovers headed north on the Munds Wagon Trail from Huckaby Trail parking lot on lower Schnebly Hill Road. The Munds Wagon Trail was built chiefly by pioneer Jim Munds, who used the trail for moving his stock between the high country of Munds Park (now Pinewood) and Oak Creek.

The trail crossed the road twice before dropping toward the creek bottom, where we saw numerous Arizona Cyprus trees – always a favorite with their colorful bark in a variety of textures.  Juniper, pointleaf manzanita, oaks, silktassle, and various shrubs, grasses, and the occasional agave and cactus also grew vigorously along the creek bottom and side slopes. The trail crossed the creek bed in a dry reach, with standing pools of water upstream. One of our hikers mentioned that several days earlier, the wash bottom had been covered with water, hence the “W” (water) designation in the hike description.

We continued on and soon hiked up a steep section to join the Hangover Trail.  We turned left and wound our way up to the cliffs that form the base of Mitten Ridge, carved from the Schnebly Hill Formation. Across the canyon to the east, the high cliffs of Coconino sandstone looked down on us from above, their faceted and polished surfaces beautifully reflecting the indirect mid-morning light.  As we hiked at the base of the cliff, we were treated to viewings of pringlei manzanita a taller form of manzanita than the more common pointleaf manzanita.  The deep red bark, often intertwined with woody bark in intricate patterns, appears wondrously sculpted.

We had some big steps to negotiate up the rocky trail as we climbed to a small saddle, where we had a brief rest stop before continuing around to the west side of Mitten Ridge.  We negotiated some steep “slick rock” while climbing back up to the base of the cliff. The trail continued northward, with trees growing from the steep slope on the left and the cliff sometimes overhanging the trail on the right. What a pleasant sanctuary this portion of the trail would be on a warm day!

We observed several Douglas-fir trees, which typically grow at a higher elevation, in the sheltered zone along the cliff. We had great views down to Midgley Bridge and across to Steamboat Rock, Wilson Mountain, and Wilson Bench.  Farther south, we could see Capitol Butte, Chimney Rock, and Lizard Head Rock. The trail worked its way over to Mitten Saddle, where we ate lunch. The views from the saddle were spectacular in all directions, with stately Coconino sandstone cliffs to the east and various classic Sedona red rock formations visible to the west and south. Directly to the south along the same ridge, we could see two windows in the Schnebly Hill Formation. One window had the appearance of an elephant’s trunk!

There was a cool breeze blowing and we bundled up as we ate our lunch. After lunch, we retraced our steps back along the cliff, across the small saddle, down the Hangover Trail and back to the Munds Wagon Trail.  As we headed to the cars, we enjoyed both the beauty of classic Sedona scenery and the company of our hiking companions.