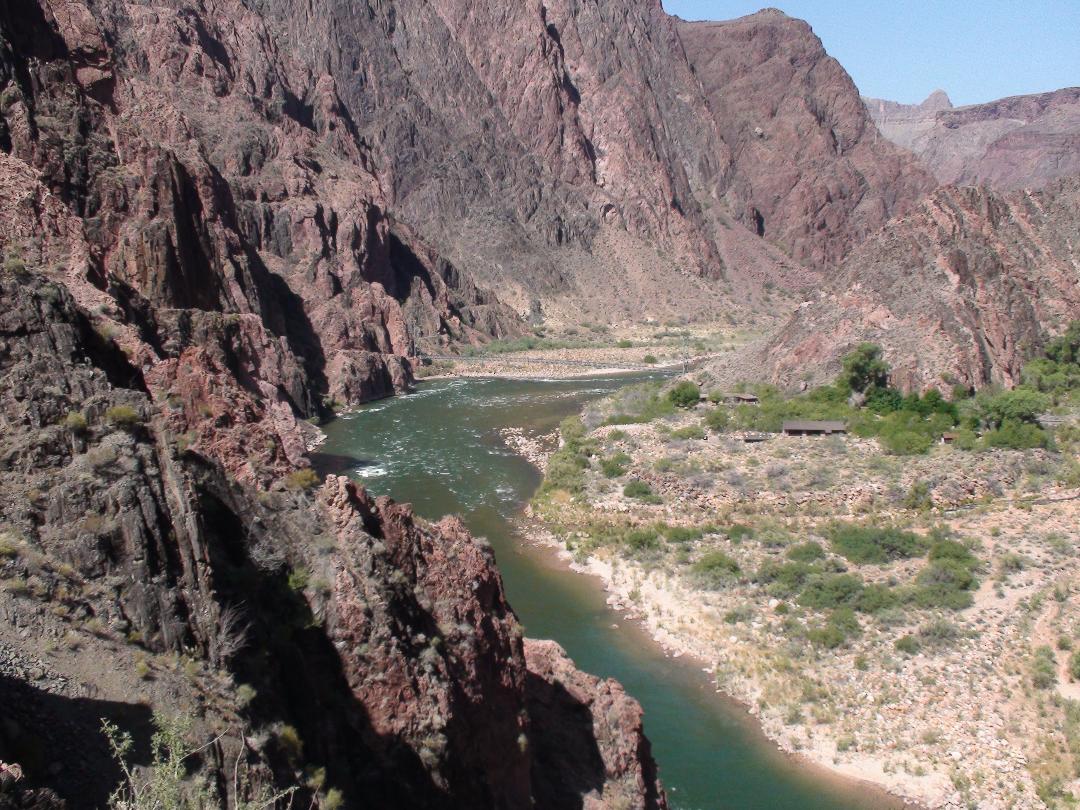 Anyone who has hiked the Grand Canyon would have loved the speaker at our monthly Sedona Westerners’ meeting.   Our guest was Kevin Fedarko, who has written a book entitled “The Emerald Mile.“    To provide a bit of background, on June 25, 1983, the Glen Canyon Dam was about to burst at the seams.  Because of El Nino, the snows in Colorado were melting fast and Lake Powell was filling up faster.  Three men in a dory named “The Emerald Mile” were going to attempt to break the speed record as the Glen Canyon Dam had to release more water than usual.  This meant that the Colorado River was going to be high for the attempted journey down to Lake Mead.  The dam was letting out seventy thousand cubic feet per second of water. One CFS = 7.48 gallons per second so the boatmen must have been licking their lips.   After seeing this old dory hanging from the rafters of a Grand Canyon outfitters on the west side of Flagstaff, Fedarko knew what he wanted to do; to be a dory man down in the Grand Canyon.  He knew nothing of what it would take to do this job.  Fedarko had never been in the Grand Canyon but applied anyway.  As we know, all that glitters is not gold, and Kevin had to start at the low end of the totem pole.  He toted the food, tents, bottled gas, and any other supplies that were needed for the paying guests’ comfort.  He then had the glamorous task of setting these up (including the toilets), then taking them down, and transporting everything out including the waste.  His was known as the Poo boat.

After a while, Kevin met Pete McBride, a National Geographic photographer and very upbeat person, who talked Kevin into hiking the full length of the Grand Canyon.   “You don’t even have to be in shape,” he said.  Setting off with four other hikers who were attempting to complete a continuous through-hike, Kevin and Pete aborted their trek at the South Canyon, less than half the distance they intended to cover on the first leg.  They were thwarted by a cactus forest, snakes, blisters, and swollen ankles.  They went back to Flagstaff where a group of experienced hikers “adopted” them and got them in condition to start again.   In one month they decided to have another try.

This time they had the assistance of others from Flagstaff, without whom (Kevin says) they would not have succeeded.  It was to be a year long journey.  Of the four other hikers they originally set out with only two of them made it all the way through.  Hiking the Grand Canyon is no mean fete.   There are no straight through trails.  There may be some animal trails halfway up the side of the canyon which one can follow for a while.   One of the most difficult things was crossing the Colorado River.  There really was no easy place to cross, but it had to be done. The going looked easier on the other side as it was impossible to carry on where they were.

Kevin and Pete were devastated by the way development was sneaking into the canyon.  They met native Americans on their journey who complained about it.  There is a heliport, the biggest in America, transporting tourists from Las Vegas and of course we all know about the Sky Walk.  They also encountered rock art and other signs of early inhabitants along their route.  Getting fresh water was sometimes a big problem, and on occasions, they had to go as high as two thousand feet above the river to find it.

The photos and video footage illustrating Kevin’s journey were absolutely wonderful and his presentation was humorous, informative, and entertaining.   Afterwards he was asked, “Would you do it again?”  “NO”

I have to say Kevin’s enthusiasm for the journey makes me feel like trying it myself.  Anybody with me?  Did the Emerald Mile beat the speed record?  In Kevin Fedarko’s words,  “No, they absolutely smashed it by over ten hours”.   It took thirty six hours, thirty eight minutes and twenty nine seconds.

If you are interested in joining the club, please visit the Sedona Westerners website at www.sedonawesterners.org/membership.  You are invited to our next regularly scheduled monthly meeting at 7 p.m., Thursday, February 13, 2020, at the Sedona Methodist Church, 110 Indian Cliffs Road.