A Surprising Day in the West 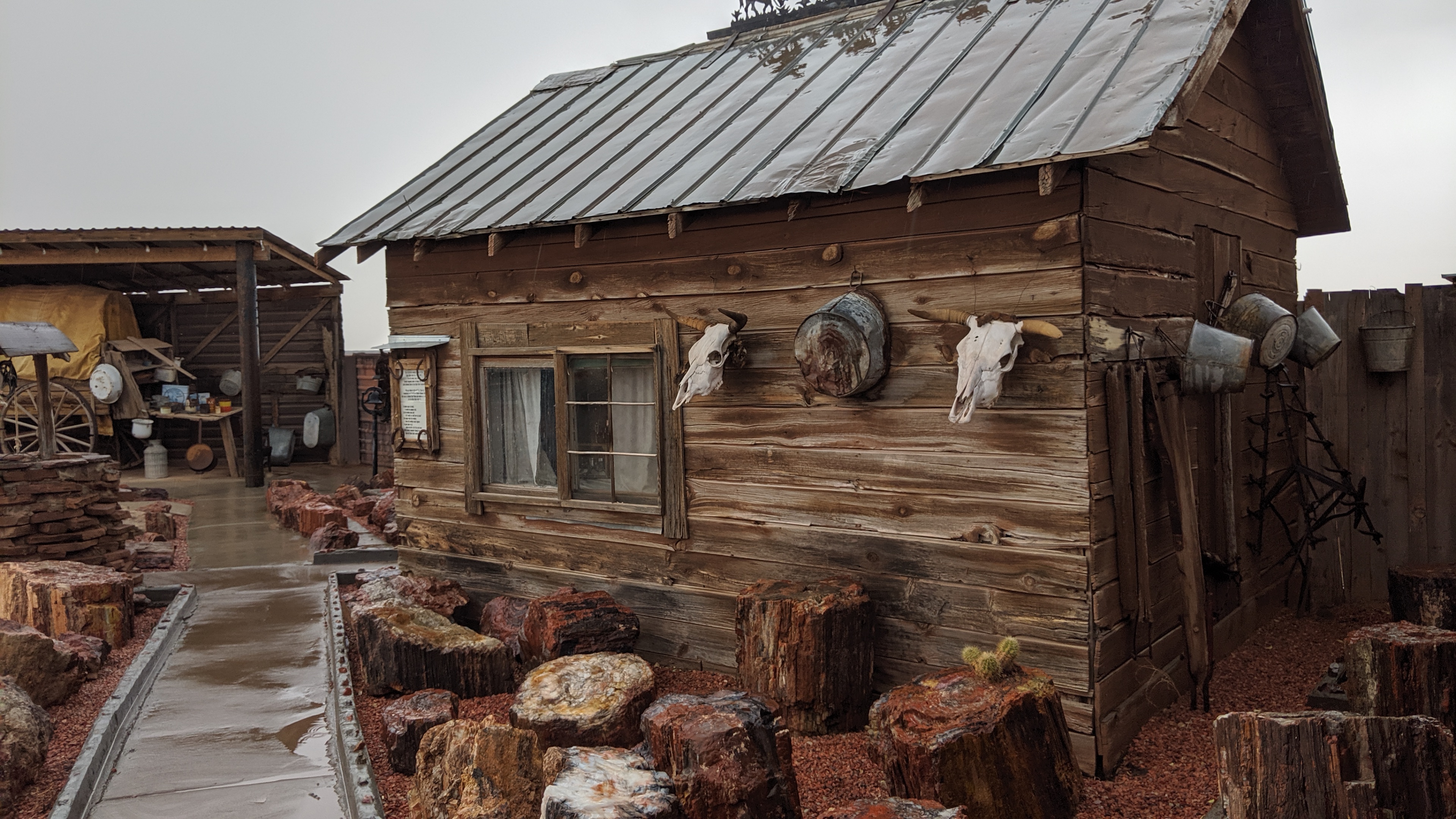 After experiencing months of negligible rain, who would have thought that the Tracker Hike to Rock Art Ranch would have presented such electrifying weather.  Leaving Sedona, we could see bolts of lightning over the Mogollon Rim.  Snow, slush and lightning greeted us at our Flagstaff rest stop.  Wondering if we should continue, we phoned Brantley Baird, the owner of the ranch, who assured us that it was currently beautiful in Winslow.  Back in the cars, we were treated to a full rainbow, the first of three, as the rain and sun continued to battle.  Fifty-five miles later and still raining, we stopped by Winslow's Standing on the Corner Park, a tribute to "Take It Easy", the song made famous by the Eagles.  The next stop gave us a peek into gorgeous Chevelon Canyon. The only natural entrance to this steep canyon is from Rock Art Ranch land.

We took several back roads to reach our promised destination and were warmly greeted by the owner's granddaughter, Tori.  She hadn't seen this much rain in four years!  But there is not a better place to be on a rainy day than Brantley's personal barn "museum".  The 5000 acre ranch had been Brantley's childhood playground.  In 1948, at the age of 11, he found his first complete pot buried in sand.  Although there are all kinds of western curiosities and memorabilia on display, the highlight is the pot room.  Every pot is unique and loved by Brantley, who describes himself as older than dirt. The oldest large black pots were used for carrying water. When full they would have weighed around fifty pounds. Since the obsidian needed for arrowheads required a lengthy walk to Flagstaff across hot dry desert, these pots were filled with water and buried in sand every five miles.  Brantley made sure that we noticed the rare square pot in his collection. The Hopi broke most of these pots believing that their inability to thoroughly clean the inside corners had resulted in deathly diseases.  As the sun finally emerged, the tour was moved outside.  The amazing collection of petrified wood was artfully displayed and brilliantly enhanced by the recent rain.  Paths led to a chuck wagon with cooking utensils on the outside and minimal sleeping space inside.  The nearby bunkhouse was an improvement with rope beds capable of being tightened with blocks of wood.  Brantley thought that's where "sleep tight, don't let the bedbugs bite" originated.

Our tour of the ranch continued by vehicle.  The first stop was an archeological site of the foundation of a three room pueblo from 1200 AD.  An array of intriguing potsherds surrounded the site, which was still a long walk from the natural spring water found in Chevelon Canyon.  Imagine carrying those big heavy pots! The next stop provided a chance to wander around more recent buildings, consisting of a Hopi house, a Navajo sweathouse, and female and male hogans.

Finally we arrived at the observation platform above the petroglyph panels of Rock Art Ranch. Tori showed us photos of some of the glyphs with contemporary descriptions such as Cinderella, the Birthing Scene, and Holding Hands.  We were turned loose to climb into the canyon and discover on our own some of the three thousand glyphs listed in the National Register of Historic Places. Only looming dark clouds and amplified sounds of thunder motivated us to end our explorations. Safely and happily we were back in the cars as it began to rain and hail.  Hot soup at La Posada was the perfect ending to a remarkable field trip expertly planned by Tracker Boss Jan Johnson.

If you are interested in joining the club, please visit the Sedona Westerners website at www.sedonawesterners.org/membership.  You are invited to our next regularly scheduled monthly meeting at 7 p.m., Thursday, January 9, 2020, at the Sedona Methodist Church, 110 Indian Cliffs Road.