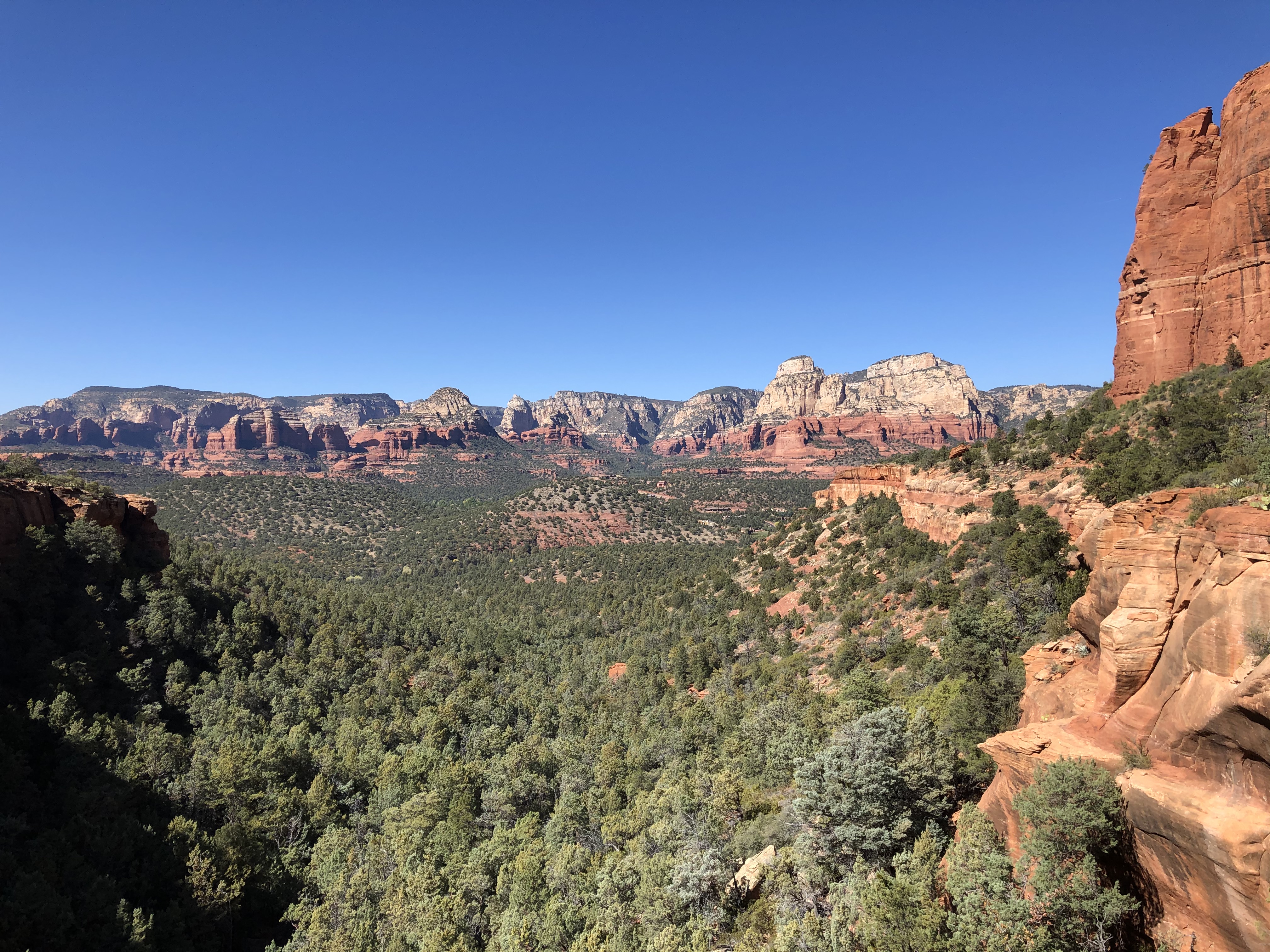 On a recent Saturday, the Rough Riders convened for the popular Soldiers Heights hike.  For me, there was a little nostalgia involved, as this was the very first Westerner hike I ever went on some 7 or 8 years ago.  For others, perhaps the popularity is due in large part to the traditional post-hike gathering hosted by the “regular” hike leaders for this one, Curt Kommer and Linda Archer.  Looking forward to the delicious refreshments (including Linda’s famous meatballs, and cold beverages which included one of my favorite brews) is great incentive for keeping those feet moving while on the trail!

After breaking up into 3 groups (third group led by Brad Bell), we were on our way.  This hike makes a large loop through the Soldiers Pass/Brins Mesa/ Devil’s Bridge area, with many spectacular vistas and interesting features along the way.  One can always count on great weather in October, and this day was no exception.  Everyone was eager to get going, as we had close to 9 miles to cover, and about 2200’ of elevation gain to conquer.

After heading up into Soldiers Pass, it wasn’t long before we were on Brins Mesa.  Soldiers Pass was so named due to the military activity that took place here in the late 1800’s.  Soldiers used an old Apache road to access the Dry Creek area, and they set up a recreation camp at the lower end of Soldiers Wash near Oak Creek.  This camp was originally known as Camp Garden, one of the first names for Sedona before the Schneblys arrived on the scene and gave the place a permanent moniker.  The Soldiers Pass trail was later used by local cattlemen to move their herds to Brins Mesa and Dry Creek basin.  In fact, the Brins Mesa trail started out as an Indian trail as well before Earl Van Deren improved it, also for the purpose of moving cattle around to different grazing areas.  One unbranded, maverick bull had wandered the mesa, managing for years to terrorize the cowboys and elude capture.  As the story goes, “On a round up, cowboys Jimmy Van Deren and Ed Dickison lassoed Ol’ Brind, but the bull pulled one or both into the brush over the edge and in desperation one of the cowboys shot the bull.”  (Sedona Places and Names, by Jean Matthews Kindig)  I guess that beats getting dragged to your death!  This is why the mesa now bears that old bull’s name.  (Older references still include the “d” in the spelling, so I’m not sure when it was shortened.)

From Brins Mesa, we headed downhill, knowing full well that this was but a temporary respite, as more climbing was in our future.  But great companionship, interesting features, and beautiful sights make the next couple of miles pass quickly, and pretty soon we are breaking for snacks with the full glory of Dry Creek basin stretching out towards East Pocket Mesa in the distance.  As we continue on, other sights come into view:  Seven Canyons, Lost Canyon, Devil’s Bridge, Balanced Rock, Mescal Mountain, Doe Mountain.  Before long, we are at the large expanse of slick rock that will serve as our lunch break.  But just before reaching here, one of our hikers slipped on some loose dirt, and grabbed a cactus to avoid slipping towards the edge of the cliff. Yikes…that was a close call!  Thank goodness there were several of us who carry tweezers in our emergency kits.

After this brief break, all the hikers headed back down the trail, enticed by the knowledge that more food and beverage awaited them.

If you are interested in joining the club, please visit the Sedona Westerners website at www.sedonawesterners.org/membership.  You are invited to our next regularly scheduled monthly meeting at 7 p.m., Thursday, January 9, 2020, at the Sedona Methodist Church, 110 Indian Cliffs Road.