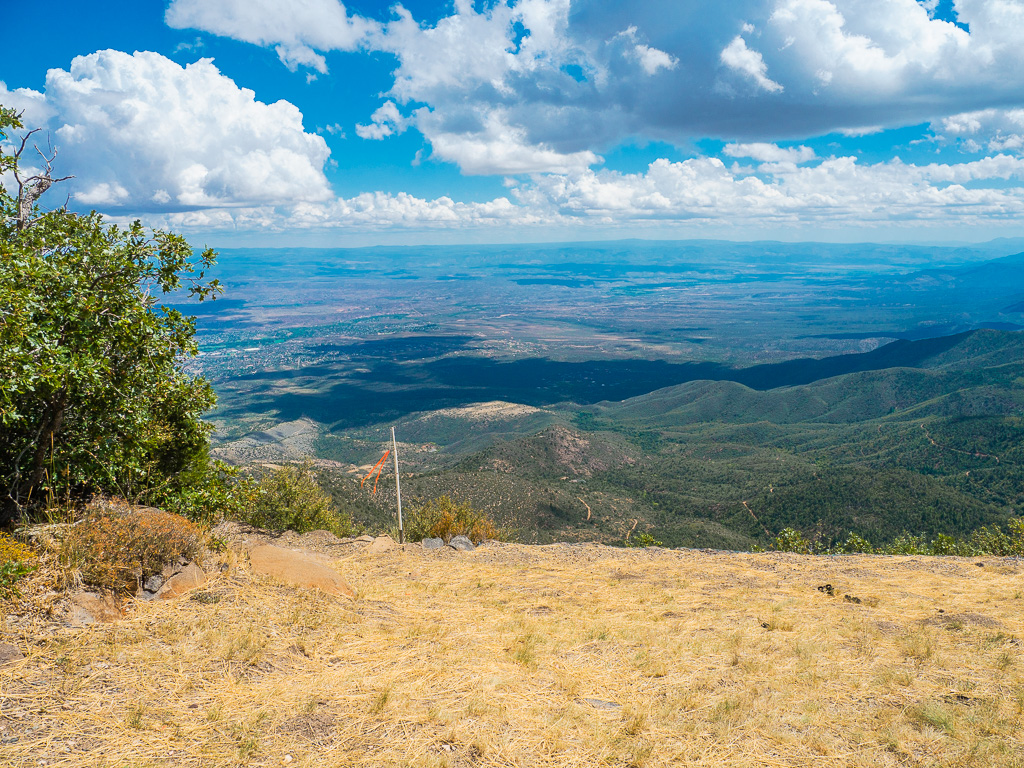 It was one of those absolutely beautiful days that September often brings us.  A perfect day for the Dogies Hiking Group to take a five-mile hike from the top of Mingus Mountain on Three Trail Loop.  This is a relatively short hike at high altitude with outstanding panoramic views of the Verde Valley and beyond. Our hike was lead by Linda Warren and Hassan Hosseini and assisted by Deborah Losse and Patti Pierce as tailgaters. The hike began at trail 106 at 7400 feet.

We began hiking down the moderately steep trail which is strewn with some rubble and  dark red volcanic ash making for some slips and slides.  The trail is very well maintained with well designed switch backs which made the hike pleasant.

We descended about 1200 feet and we took a snack break.  Linda brought some homemade cookies to share.   We had to replace those calories we just burned off!

My legs were a little wobbly after about 2 miles of this descent due to being early in the hiking season and my lack of hiking regularly during the summer months.

The views were wonderful, overlooking Clarkdale, parts of Jerome in the foreground,  some of the red rocks of Sedona to the east, and the San Francisco Peaks to the North.  The slopes of Mingus were green and lush with the tract of the Verde River, parts of Cottonwood discernable in the South.  A slight haze of smoke from the fires in the north towards Flagstaff drifted in layers over the whole area.

After the break, we began climbing up trail 105 which is a series of gentle switch backs about 2 miles along the north slope to the elevation where the hike began.  We went down 1200 feet and back up 1200 feet.  Good exercise.

At the top, we hiked through the woods to the hang-gliding launch site which was built by the Arizona Hang Gliding Association.  The plaque read HOOK ON NOW elevation 7815 feet. There were no gliders on hike day because of poor wind conditions, but I would like to return when they are flying.

We continued to hike for another half mile along a gravel road with the forest of pine trees on the right and the cell towers and related structures on the left.  Many of the pine trees were stained with a yellowish orange band about 5 feet from the base which had a blaze of the same color.  I have learned that this indicated the tree should not be cut when the forest service does some clearing.

Ripe Prickly Pair cactus was plentiful throughout the hike.  If you have the patience, these red buds can be harvested to make a sweet, red syrup.  Check on line for the method of processing the fruit.  The syrup makes an ideal and colorful sweetener for a very special Margarita.

We returned to our cars after a great day on the mountain with a great bunch of people.

If you are interested in joining the club, please visit the Sedona Westerners website at www.sedonawesterners.org/membership.  You are invited to our next regularly scheduled monthly meeting at 7 p.m., Thursday, November 14, at the Sedona Methodist Church, 110 Indian Cliffs Road.