Pyramids and Polygons a Natural Way 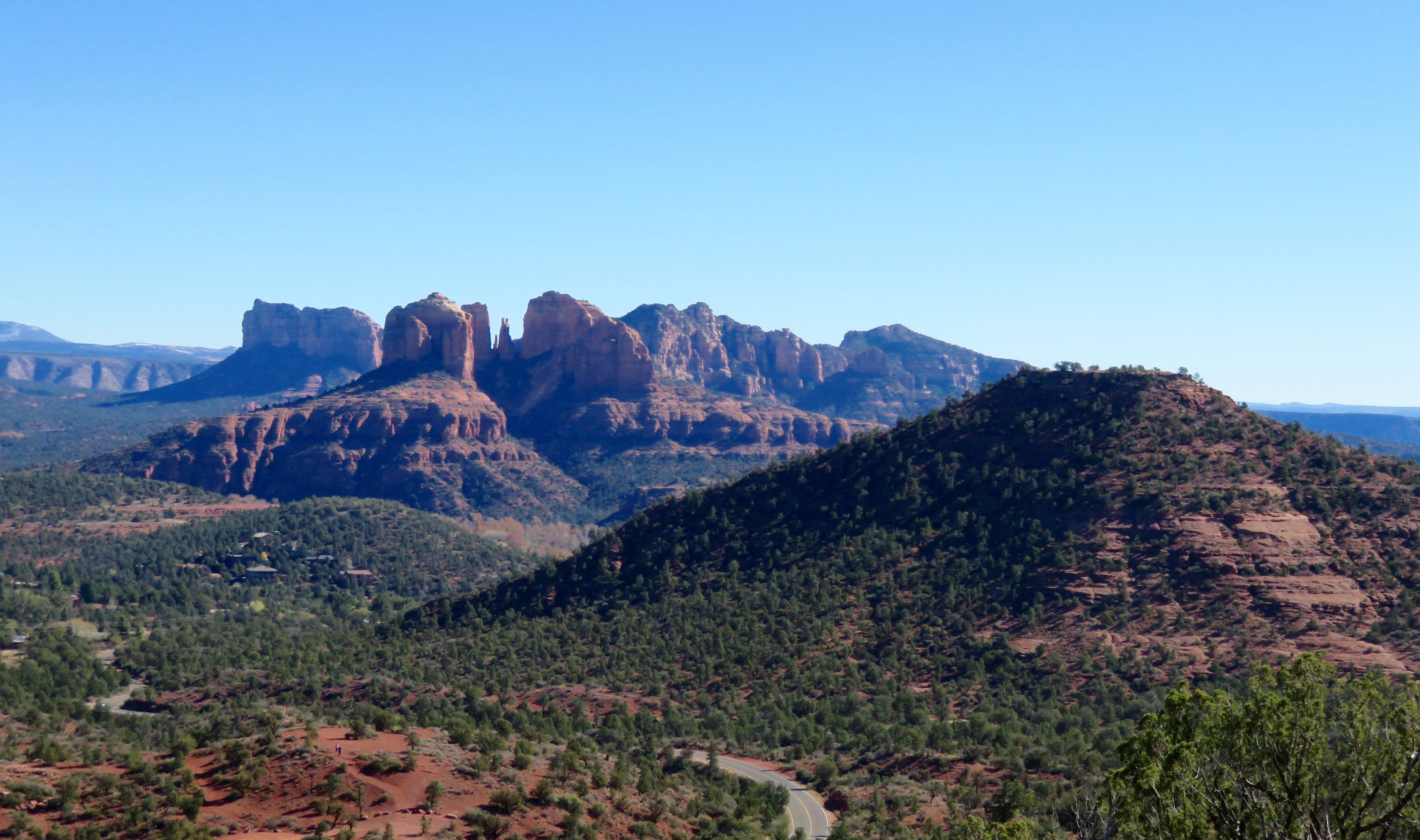 A Pyramid, a Cathedral, and a Courthouse can be clearly seen in this view taken while hiking on the Scorpion Trail. This area, south of the high school, provides panoramic views of many of our most well-known red rock formations.

On a sunny and thus, somewhat warm day, the Sedona Westerners’ Dogies hiking group met at the Posse Grounds Park in Sedona to prepare to hike to the nearby Pyramid rock formation, while seeking polygons.  It turned out to be a large group, so we quickly formed into carpools to accommodate traveling to the trailhead parking lot, which has only a limited number of spaces.  Once there, we formed into three smaller groups of hikers, which were led by Ernie and Lynn Pratt, along with Al Gore.

This hike starts with an almost unpleasant, steep, wake up ascent that is somewhat tempered by spectacular views of Cathedral Rock, the airport, and a distant Thunder Mountain.  We were also rewarded by our first geological lecture that had an upside of allowing us to catch our breath and nap, before we proceeded onward.  Non-stop geological observations, punctuated with rudimentary archaeology, typified the first part of this hike.  Our know-it-all leader went on and on.  At a level part of the trail, we found our first set of polygons; they were purported to represent an area of regional drying of the near shore sediments, causing deep desiccation cracks that were subsequently filled with white sands blown in from the nearby dunes.

Hiking onwards, we briefly looked back at a wonderful view of Cathedral Rock and discussed well-known geologist Paul Lindberg’s interpretation of how this unique, iconic landmark came to be formed.  Looking southward, we could see the House Mountain shield volcano filling the horizon.  Our leader once again found his voice and detailed the well-known geologist Wayne Ranney’s geological mapping and interpretation of that mountain.  The interpretation includes a tale of asymmetry and varying basaltic flows, including hawaiite, mugearite, and benmoreite, along with my favorite, a nepheline monzodiorite sill.

Blessedly, we quietly hiked along the cliff while enjoying both the warmth of the day and the wonderful views of Red Rock State Park and the surrounding community.  There were even some small flowers beginning to bloom.  At our lunch spot, we sat upon more polygons.  While being entertained by yet more exhortations on geology and sitting in the shadow of some “wannabe” columnar basalts, we contented ourselves by receiving not one, but two cookies from the leaders, a chocolate chip and an oatmeal raisin.  Since the Sedona Westerners’ hike leaders usually pass out only one cookie per person, this was a special treat, making it well worth the hike.

On the Schuerman Trail, we were dismayed to see that most all of the prickly pear cacti on top of the mountain were dying from some sort of blight.   As uncomfortable as it is to encounter one of these plants head on or tail on, it is still very sad to see them dying in such numbers.  On the Scorpion Trail, we reached a vista point where you could look outwards, capturing in one picture a Pyramid, a Cathedral and a Courthouse.  This is truly one of the many special spots in Sedona.

There was no geological exam at the end of this hike, instead, just a sense of well-being, having experienced a beautiful day with wonderful views while covering an appreciable hiking distance.  Keep on moving and learning, pyramids and polygons – Nature’s Way.

If you are interested in joining the hiking club, please visit the Sedona Westerners’ website at www.sedonawesterners.org/membership.  You are invited to our next monthly meeting at 7 p.m., Thursday, March 14, at the Sedona Methodist Church, 110 Indian Cliffs Road.  Written by Ernie Pratt.