Sedona Westerners Hike with Coffee, Tea, and Me 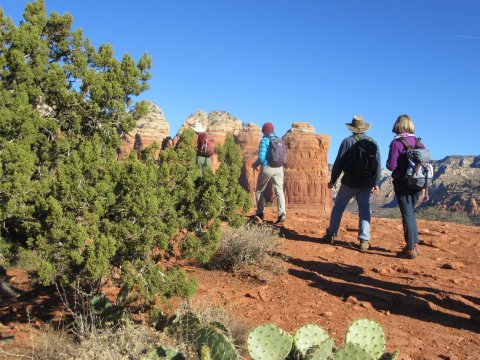 Early on a bright, crisp winter morning, the Drovers hiking group of the Sedona Westerners set out to hike the trails of West Sedona.  After dividing all the hikers that day into two small groups, led by Charlie Schudson and Dave Minott, we first hiked via the Soldiers Pass Trail to the gaping sinkhole known as the Devil’s Kitchen.  There, co-leader Charlie Schudson pointed out “The Piano,” a mammoth rock that had broken off and tumbled into the sinkhole in 1989, in response to tremors from the devastating California earthquake of that year.  Perhaps some readers can recall the live World Series broadcast being dramatically interrupted by that earthquake.

We then found ourselves on the Teacup Trail, hiking through a lovely cypress tree forest, marveling at the dusting of snow along the sides of the trail, snow that looked as if it were applied by an artist, as it sparkled in the dappled sunlight.  Soon, the work began – a scramble up to the top of Sugarloaf Mountain, where we were rewarded with a wonderful panoramic view of this town we call home, Sedona.  Far below, we could see tiny people walking their dogs on the residential streets, as well as the business district beyond starting to awaken in the early morning.  Thunder Mountain and Coffee Pot Rock dominated our foreground view impressively, but we also had fun spotting landmarks in the distance – Wilson Mountain, Jerome, snow-dusted Mingus Mountain, as well as Bell Rock and Cathedral Rock, off towards the Village of Oak Creek.

After descending Sugarloaf Mountain, our next objective was the red rock ledges located high up beneath Teacup Rock and Coffee Pot Rock.  Reaching the ledges via the Teacup and Skidmark Trails, we soon found ourselves looking up a tall rock spire to its top, where Teacup Rock appeared to balance precariously.  While Teacup Rock is a very imposing rock formation up close, we all agreed that much imagination is needed to see what looks like a real teacup, atop Teacup Rock.  Not the case with our next stop along the ledge, Coffee Pot Rock, where we found ourselves craning our necks upward in order to take in this iconic rock formation from base to top.  All Sedonans recognize this rock formation, seen clearly from a distance as a coffee pot replica, replete with pot, spout, and lid.  However, unless you view it up close, from its base as we did, it’s hard to appreciate how gigantic Coffee Pot Rock truly is.  On a lighter note, about Coffee Pot Rock, one of our hikers wondered aloud how much longer it may be before young visitors to Sedona start searching the horizon for a rock formation that looks like a coffee K-Cup, not knowing what a stovetop coffee percolator looks like.

Next, we found a little alcove in the cliff at the base of Coffee Pot Rock, thus providing a perfect spot for our break.  Sitting there together, backs against the cliff wall, comfortable in the warming sun on this winter morning, we ate lunch, shared homemade cookies, and enjoyed good conversation among friends.  Perched on this aerie, however, we had to remain mindful of our proximity to the edge of a sheer cliff, only a few feet in front of us.

It was then time to begin our return hike via the Teacup Trail.  Our descent from the ledges had us rock-hopping and resorting occasionally to a “bum slide” in order to safely descend the steeper rock faces.  Back through the cypress tree forest we hiked, soon completing our return to the trailhead parking lot.   With one last look back at Coffee Pot Rock, now looming far above us, our hike ended with grins all the way around and a sense of a day well-spent together, outdoors in the best tradition of the Sedona Westerners.

If you are interested in joining the hiking club, please visit the Sedona Westerners’ website at www.sedonawesterners.org/membership.  You are invited to our next monthly meeting at 7 p.m., Thursday, March 14, at the Sedona Methodist Church, 110 Indian Cliffs Road.  Written by Dave Minott.