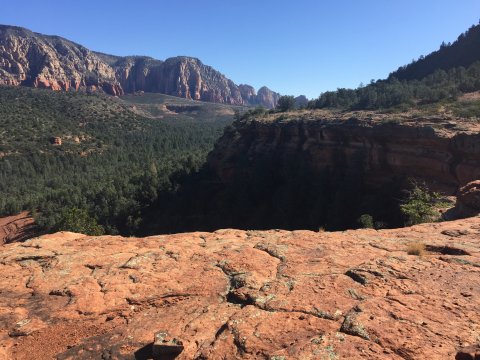 First came the Sinaguans.  Over a thousand years ago they were drawn to the perennial stream that cascaded down Soldiers Pass and the good hunting that the water attracted.  When the Sinaguans eventually moved on, it was the Navajo and then the Yavapai who hunted, farmed, and continued to explore the area until 1871, when General George Crook and the U.S. Cavalry came to Soldiers Pass for a different kind of hunt.  He established "Camp Garden" as his base of operations for "rounding up" the Yavapai, and from there he pursued them so relentlessly that two years later (1873) over 5,000 exhausted Yavapai reluctantly surrendered to him at Camp Verde.

After that, the human history of Soldiers Pass calmed down a bit, but its natural history continued to rumble.  In 1888, the Devil's Kitchen sinkhole (a Soldiers Pass landmark) was violently created by the sudden collapse of subterranean limestone caves, and in 1989, another large section of the North rim of the sinkhole crashed down in an explosion of noise and dust.  Then, in 2006, the Brins Mesa fire burned 4,400 acres and came within a hair's breadth of roaring down Soldiers Pass to the neighborhoods below.

Even today there remain fascinating bits of that historical record scattered throughout the Soldiers Pass area, and on a recent Saturday the Sedona Westerners’ Rough Riders, led by Curt Kommer, Linda Archer, and Tom Yager, hiked back in time on the Soldiers Pass and Brins Mesa trails.  From the Soldiers Pass trailhead, and after a look at the now-dormant Devil's Kitchen, a Jeep road can be hiked 1.2 miles to the boundary of the Red Rock Secret Mountain Wilderness.  This Jeep road was originally created by General Crook as the supply road for his cavalry at Camp Garden, and on its way, it passes the "Seven Sacred Pools", where the rain water that collects in these natural stone cisterns is all that remains of the perennial stream that attracted the Sinaguans so long ago.  Somewhere in this area, too, is an old grave site discovered by the Westerners in the 1960s and is now a protected U.S. Forest Service historical site.  It may represent the burial of one of General Crook's Apache scouts, but as the plaque there reads, "Quien Sabe?" which translates to, "Who knows?"

Entering the Secret Mountain Wilderness, the Soldiers Pass trail climbs 600 feet up to Brins Mesa.  This trail, originally an ancient Native American footpath, was also used by the cavalry, and then local ranchers, to move their cattle and horses up to the Mesa to graze; now it's Sedona Westerners, locals, and visitors who make the climb along red-rock benches and through Juniper forest.  At the top, hikers intersect the Brins Mesa trail, and turning to the East opens up spectacular views of Wilson Mountain, Brins Ridge, the Fin, the Sail, and many other Sedona landmarks.  The trail also winds right through the center of what was the leading edge of the 2006 Brins Mesa fire before descending to the Jordan Trailhead, and the contrast of the skeletal remains of burned trees with the lush new undergrowth is just another reminder of how nature, and people, have sculpted this area into what we see today.

This hike has always been a Sedona Westerners favorite.  We respect and appreciate the beauty and history of Soldiers Pass, and we are always happy to add our footprints to those of the many that have gone there before us.

If you are interested in joining the hiking club, please visit the Sedona Westerners’ website at www.sedonawesterners.org/membership.  You are invited to our next monthly meeting at 7 p.m., Thursday, February 14, at the Sedona Methodist Church, 110 Indian Cliffs Road.  Written by Curt Kommer.