Rough Riders Do a Beast of a Hike 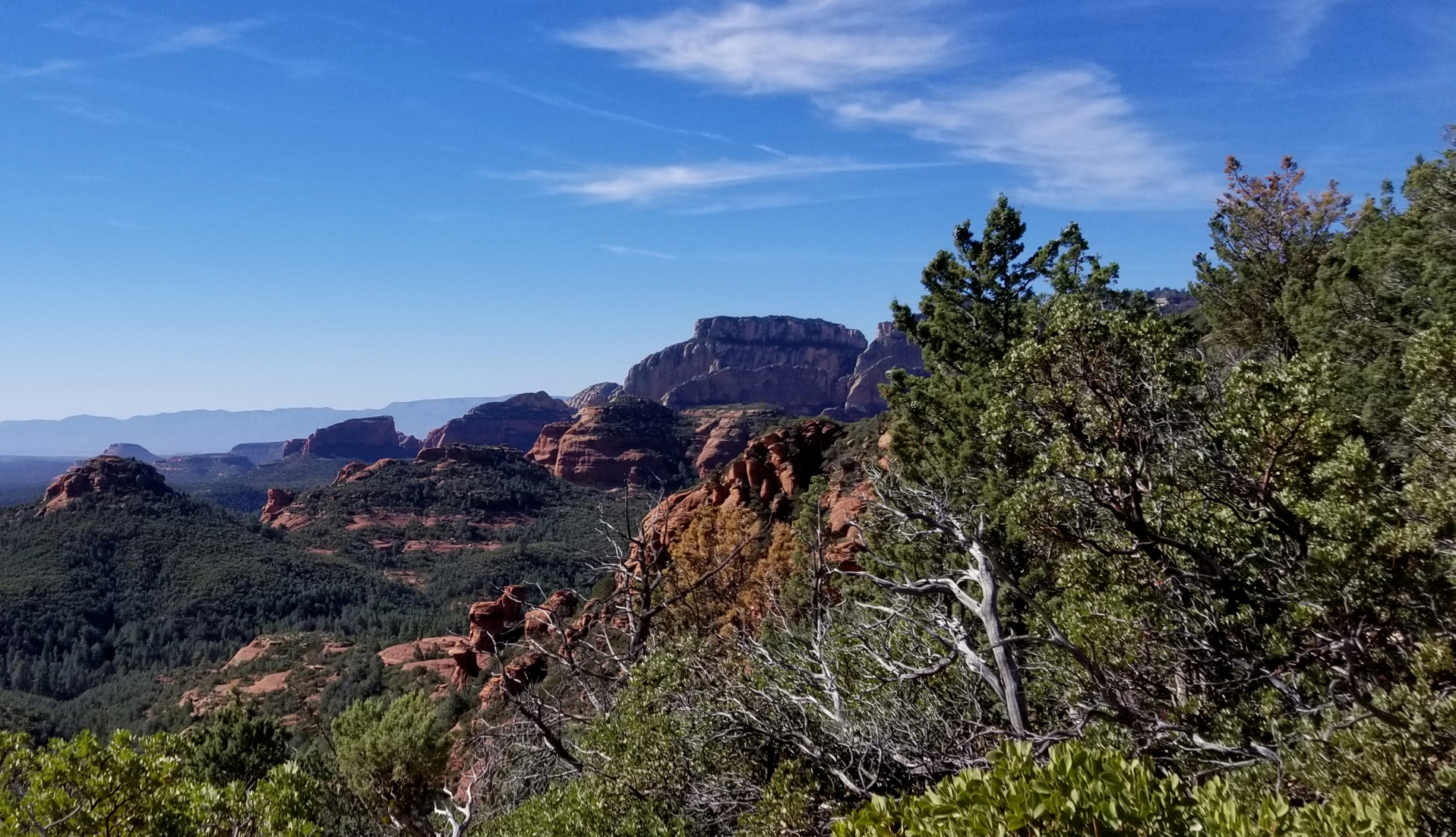 The rugged beauty of Bear Sign Canyon can be seen in this photo. Its thick forest and massive red rocks envelop the hiker in a quiet, not-very-often hiked part of the extensive wilderness nearby Sedona. Photo by Brad Bell

“What a beast of a hike,” or words to that effect, was a common cry after the recent Sedona Westerners’ Rough Riders hike of the Bear Sign and Narrow Canyon trails. The Rough Riders have a reputation for doing some of the more difficult hikes in the Sedona area and this one, though not terribly long and without a great deal of elevation change, proved to be a challenge.

The Westerners “scout” a hike before the official trek occurs.  About a week before the official hike, the sounds of our scouting party could be heard fighting through the brush.  You could hear voices from deep in the manzanita and scrub-oak, “Are you on the trail? Is this the trail? Where is the damn trail”?  With so many experienced hikers, we remained confident that come hike day, we would find the trail without too many wrong turns.

The day of the hike was just perfect. With temperatures in the upper 70s and not a cloud in the sky, our adventure began.  To get to the trailhead we traveled to the end of Vultee Arch Road, otherwise known as FR 152, an “unimproved” road that many tourists use to hike to Devil’s Bridge – more on tourists later.  Driving down this road is turbulent to the extreme.  Passengers responded to the ride with laughter and some grunts, all while maintaining a death-grip on anything solid in the vehicle.  Eventually, we covered the 5 miles to the trailhead and with much rejoicing, fell out of the cars.  After a short time, packs were on, the groups got organized, and off we went.

The first third of the hike was an easy stroll on the well-defined Bear Sign trail.  We did some boulder-hopping while crisscrossing Dry Creek, where you could see the evidence of how much water had come through the area during the summer monsoons.  There was timber, like pick-up-sticks, stacked high against still-standing trees.  Beaches were formed with tons of sand carried by powerful and unstoppable water as it forced its way through the narrow red-rock lined creek bed.  It was impossible not to reflect on the power of water, to slowly create and inevitably, to wear down, our beautiful red rock scenery.

Soon we arrived at Narrow Canyon, which isn’t really a canyon in the sense of high, sheer walls on either side; it’s more like a narrow wash.  There were some tricky areas to negotiate as we hiked slowly higher and higher.  Narrow Canyon becomes steeper as you go up with lots of rock scrambling, and the trail becomes harder to find.  We decided to take a break and catch our breath by admiring the view at one of the few places without dense brush.  After resting for a few minutes, we tackled the remainder of the canyon.  Scouting the trail the week before paid off and with only an occasional wrong turn, we made it over the head of Narrow Canyon.  We then dropped into another wash that led us to a well-deserved lunch break.

Off again, we hiked up and down gullies, through brush, and on red rock benches with breathtaking views of the Dry Creek Basin.  Along the way, we were treated to some relatively fresh Black Bear tracks that truly gave meaning to the trail name, Bear Sign.  After a steep downhill climb, we arrived at the head of yet another wash.  By now almost everyone was tired, so we headed down the wash, hopping on boulders and jumping over fallen trees, before finally intersecting the Vultee Arch trail.  We followed that trail until we were back where we started, some 5 hours and 6.5 miles earlier.  Now all that we had to do was to endure the 5 miles of the bone-jarring, head-banging drive back out on FR 152.  We all love the trails of Sedona, but after that ride, asphalt never felt so good.

I mentioned tourists earlier - on the way out, we counted 109 dusty visitors on the road between Devils Bridge and the Dry Creek parking lot.  During our hike of Bear Sign and Narrow Canyon trails, we counted none, proving that if you want to get away from the crowds, you can in Sedona.

If you are interested in joining the club, please visit the Sedona Westerners website at www.sedonawesterners.org/membership.  You are invited to our next monthly meeting at 7 p.m., Thursday, January 10, at the Sedona Methodist Church, 110 Indian Cliffs Road.  Written by Dave Kieres.