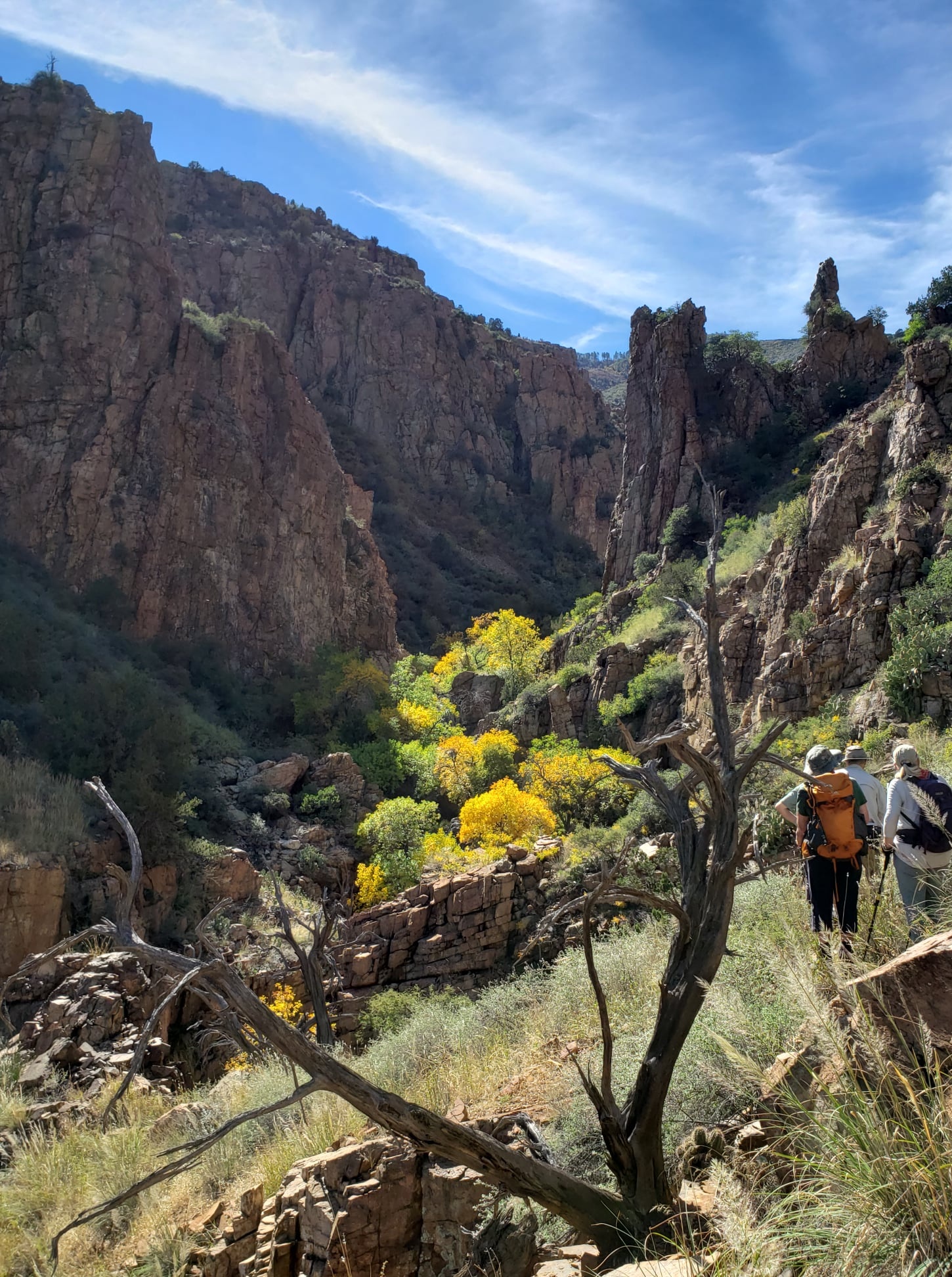 View of Black Canyon as seen while hiking on the Black Canyon trail. The beautiful fall color can be seen on the deciduous trees that line the creek that flows through Black Canyon. Photo courtesy of Jim Warren.

It was a beautiful day in November when the Sedona Westerners’ Mustangs hiking group to headed over to Cottonwood to hike the Black Canyon trail into the Mingus Mountains.  Since the Black Canyon trail is a lesser-hiked trail with ample shrubs and trees, it offers abundant cover for animals.  While scouting the hike, we flushed deer in the area.  The abundance of wildlife could also be the reason that two hunters, fully outfitted in camouflage clothing, with their rifles over their shoulders, were at the trailhead along with us.  Once we determined that they were heading in a completely different direction from us, we proceeded with our hike.

We departed from the trailhead, which is at the very end of Ogden Ranch Road, just outside Cottonwood.  Our two groups were led by Scott McFeely and Jim Warren.  After a brief start on flat terrain, the trail began to ascend into the foothills with numerous long, straight stretches, as we worked our way back around many hills and hiked miles deeper into the canyon.  The trail provided a nice balance between a steady aerobic exercise activity and being diverted by glimpses of trees turning fall colors along the creek down in the canyon.  Early on, as we hiked the long switchbacks, a red-tailed hawk was spotted soaring almost directly above us, so we paused to watch it effortlessly catching the updrafts from the foothills.  As we gained elevation, we looked back toward Sedona to view the red rock formations across the Verde Valley, with Cottonwood and the Verde Santa Fe neighborhood down below, and the San Francisco Peaks in the distance.

Further up the trail, we stopped at a shrub which protruded partially into the trail.   As we speculated about whether that particular specimen was called Mormon Tea, we saw a more interesting subject curled up on a ledge just behind the shrub.  A diamondback rattlesnake was coiled, immobile, just three feet from where we stood.  His markings were clear and beautiful with the sun shining on him.  Fortunately for us, since we were definitely too close for comfort, we were pleased that the rattler took no interest in us, and we quickly vacated that spot.

The highlight of the day was our choice of a lunch break spot, which we reached after an arduous, but uneventful descent into the canyon.  Both groups took their major break at a beautiful pool between two waterfalls, with the sounds of falling, rushing, and splashing water, and breezes ruffling the leaves.  Mother Nature was painting a beautiful picture with the leaves of the deciduous trees ranging from the last of the green to the brightest yellow.  We sat on and among rocks worn smooth by the action of water over thousands of years.  We were careful to avoid any slippery surfaces, as that granite rock would certainly win in any confrontation with a body part.

The pool presented an irresistible opportunity for one Mustang, who chose to cool herself off with a quick swim in the clear, cool water.  It is not uncommon for members of the Westerners to take a dip during a hike, but some members are heartier than others when it comes to cold mountain pools.  Regardless of how the time was spent, it was a gorgeous place for a dip, or to just relax, munch on lunch, and recharge for the hike out.

The return trip was a bit warmer, and there was no sign of Mr. Rattler, or any other non-Westerner hikers the entire day.   So, we were all very happy that our hike of 8 miles and 1,900 feet elevation gain, ended with a long downhill trek to the cars.

If you are interested in joining the club, please visit the Sedona Westerners website at www.sedonawesterners.org/membership.  You are invited to our next monthly meeting at 7 p.m., Thursday, January 10, at the Sedona Methodist Church, 110 Indian Cliffs Road.  Written by Linda Warren.