Westerners Go High and Then Underground 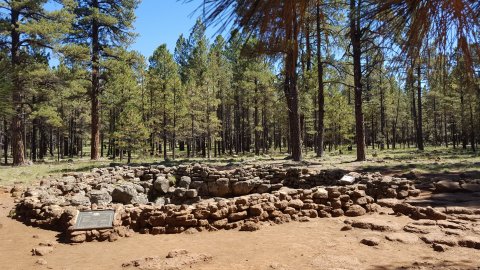 The entrance to the Lava Cave is reached by climbing over the boulders seen in the photo.

It was a beautiful Fall day as the Sedona Westerners’ Mustangs hiking group departed from Sedona and the Village of Oak Creek, for our destination of Wild Bill Hill near Bellemont.  Our meeting point for the two groups was the truck stop just north of I-40, near Bellemont, where the two groups gathered and signed in.  From the truck stop, we followed a frontage road alongside I-40 for a mile or so to FR 171, where we turned north.  After several miles of driving on this rough dirt road, we stopped, put on our packs, and following our hike leader, Dave Minott, we hiked down a side road toward Wild Bill Hill.  After a mile or so of easy hiking, we came in sight of our destination, and our very steep ascent up an old jeep trail to the summit.  It seemed that the trail became steeper as we ascended, and we paused numerous times to catch our breath.  Once on the summit, with its spectacular views of Government Prairie to the west and the San Francisco Peaks to the east, we paused for a rest break.  Out came the cookies.   They were enjoyed by all and disappeared quickly.

After our rest stop, we proceeded through the scrub and Ponderosa Pine forest downhill to a very interesting slot canyon, which led us back to the flat land below.  The slot was very steep with many twists and turns and was very narrow at some points.  We took advantage of the many photo opportunities while we were descending this rocky slot canyon.  Once back down to the prairie, we hiked back to our cars along a section of the historical Beale Wagon Road, the first U.S. Government commissioned road in the Southwest.  The route was plotted by Navy Lieutenant Edward Fitzgerald Beale in 1857 and ran from Ft. Smith, Arkansas to Ft. Mohave, California.

Once we were back at our cars, and after a short rest, we headed out again.  Our destination now was not home, but rather the lava cave located some miles further north on FR 171.  When we reached the parking area for the lava cave, we donned our jackets and headlamps in preparation for our next adventure.  The Lava Cave or Lava River Cave, as it is sometimes called, is estimated to be between 650,000 to 700,000 years old and is believed to have been formed when molten lava erupted in nearby Hart Prairie.

The entrance to the cave, which is managed by the U.S. Forest Service, is a circle of boulders surrounding an opening.  As we climbed down into the cave through the large boulders that guard its entrance, and reached the floor of the cave, we immediately noted a very significant drop in temperature.  The cave temperature was around 45 degrees Fahrenheit, in sharp contrast to the 75-degree temperature we had been enjoying prior to entering the cave.  As we made our way along the cave floor, carefully watching our footing, we were amazed by the size of the cave.  Its height varies from 20 to 30 feet in general to as little as 3 feet in some locations, and it is about 20 feet in width.  Some of our hikers wore hard hats in the cave, to avoid possible injury from the occasionally low ceiling.  After about a mile underground, we reached the end of the lava cave and paused to take pictures by using the light from our headlamps.  We then retraced our steps and exited the cave into the bright sunlight and warm temperatures.

Following our lava cave adventure, we returned to our cars and began the drive back to Sedona.  Having worked up an appetite from our adventures of the day, we stopped at a local hamburger stand for burgers, fries and for some, malts.  We all departed the hamburger stand with smiles on our faces.  We arrived back in Sedona satisfied with our day, in more ways than one.

If you are interested in joining the club, please visit the Sedona Westerners website at www.sedonawesterners.org/membership.  You are invited to our next monthly meeting at 7 p.m., Thursday, January 10, at the Sedona Methodist Church, 110 Indian Cliffs Road.  Written by Scott McFeely.