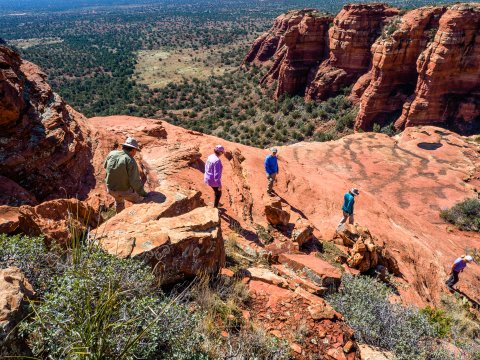 Sedona Westerners are descending a steep, rocky section of the Bear Mountain trail as they make their way to Pac-Man Rock. The strikingly-eroded red rocks on the south side of Bear Mountain are in the background.

The Sedona Westerners’ Tuesday hiking group, the Dogies, chose the day after our recent rain as a good, non-dusty time to visit Pac-Man Rock on Sedona’s far west side.  This rock formation, which resembles the video game character, Pac-Man, is located off to the side of the Bear Mountain trail.  On this hike, we were led by one of our youngest hikers, Crystal Marty, up to the steep first bench of Bear Mountain.  After reaching the bench, we made a left turn and stayed on that same red rock level for the rest of the hike.

After a brushy first section of the trail, we rounded a huge open-rock sandstone point on the south side of the Mountain.  After that, we found ourselves on a long stretch of shaded ledges, crossed by water seeps from the week’s rains. When hiking under these conditions, avoid stepping into water if you can, and especially avoid stepping on the wet black algae that forms where water has been seeping across rock for an extended period. When wet, the black algae can be as slick as ice.

When we rounded the next point, a view of hoodoos opened below us. Hoodoos form when a highland is capped by a thin layer of hard rock, like basaltic lava, and the underlying soft rock is carved by erosion.  As erosion knifes into the soft layer under every crack in the hard layer, large chunks of the hard rock fall into the carved-away parts of the soft layer underneath, until all that is left are isolated pinnacles of soft rock, each one capped by a teetering slab of remaining hard rock.

After passing a Sinagua roasting pit, where the first inhabitants of our area roasted agave to tenderize it, we came to Pac-Man Rock, a huge sandstone boulder that had rolled down from the next higher bench in ancient times. There is a cowboy-era graffito on it that is so high off the ground, that we think it must have been incised by a man on horseback.

After our visit to the Rock, we continued to the next rocky point, which is a rolling expanse of open sandstone from which we had views in all directions: out toward Doe Mountain, Thunder Mountain, and Chimney Rock, then Bear Mountain’s second bench to the north of us, and finally across to a fanciful chain of spires emerging from a point on the higher red rock bench.  This spot offered us a lot of good rocks to sit on and to enjoy our lunch.  The slickrock was a Jackson Pollock expanse of multicolored lichen, with colors ranging from orange and bluish, to fluorescent yellow-green.

During lunch, many of us took the opportunity for a short side trip down from the rocky point to a lower level that features a “scratchy wall” of vertical sandstone that has weathered into a series of inscribed striations that look as though they were designed by an architect.  At the edge of this level, there is a series of algae-bottomed pools, which for the first time, we found full of fresh rainwater.  We had a lot of fun looking for reflection photo opportunities in them.  After lunch we returned the same way we had come, on the Bear Mountain trail, enjoying that short interval of wonderful weather between rainy days.

If you are interested in joining the club, please visit the Sedona Westerners website at www.sedonawesterners.org/membership.  You are invited to our next monthly meeting at 7 p.m., Thursday, November 8, at the Sedona Methodist Church, 110 Indian Cliffs Road.  Written by Alan Gore.