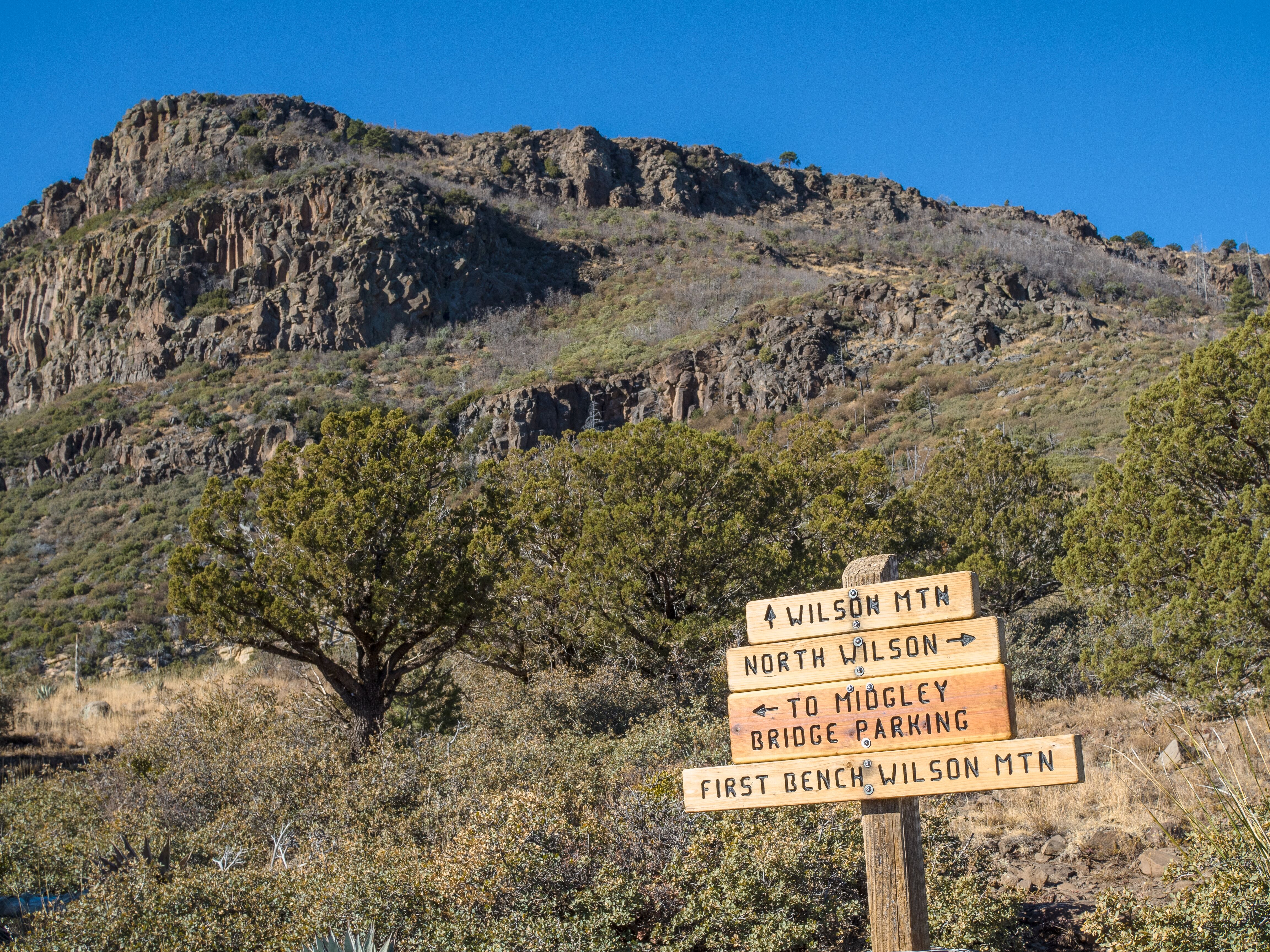 View of Wilson Mountain from the First Bench. The actual summit can be seen in the top left of the photo. The trail sign marks the intersection of the North Wilson and the South Wilson trails. Photo courtesy of Al Gore.

In early January, the Mustangs group of the Sedona Westerners might not have had the New Year in mind as they started their eight-mile round trip hike of the North Wilson Mountain Trail.  But an hour later, as they took a break sitting on boulders high above Midgely Bridge, their thoughts of time transitions certainly were triggered by their hike leader’s reading:

“North Wilson Trail cannot be considered suitable for a relaxed afternoon jaunt – except for Westerners, of course.  The trail winds up a deep canyon.  Alternating with patches of sun gilding the cliffs, shadowed stands of tall, slender pines cool the air.

“Sedona was jampacked with tourists; Oak Creek Canyon, sardine-can-full of creek viewers.  Sedona Westerners simply know a better way to enjoy life.  The city dwellers and tourists with California plates had a good thing, but the Westerners won out when they sought the heights.

“As with many of the Westerners’ hiking trails, North Wilson was once a cow trail up to the bench and mountaintop where cattle were grazed in the spring.  It fell into disuse after the cattlemen quit using it; then, in 1975, Myrtle Smith, one of Sedona’s first ladies, suggested to the Forest Service that the trail’s restoration would be a good project.  They agreed and set to work, aided by Myrtle who went up with them each day to be certain they followed the right course of that old trail.”

“All who enjoy that hike now owe you much, Myrtle.”

These words, describing a Westerners’ hike of North Wilson, were forty years old.  They were written by Lorraine Jaquith who, with Dixon Fagerberg, Jr., co-authored A Sampler of 108 Sedona Westerner Trail Walks (1979: The Pronto Press).

Yes, at least four decades ago, Westerners not only savored the sights of many of the trails trekked today, but also recounted what the book’s cover called their “zesty adventures.”  What’s more, according to the book’s Forward, even in those ancient times, their “expeditions” were “written up each week for the Red Rock News.”

But in forty years, some things change.  Today, of course, Westerners’ leaders are as likely to be women as men.  But not so four decades ago.  The Sampler authors wrote:

“Hike leaders have certain qualifications.  They must be a good hiker, know the trails and have plenty of stamina.  Bob Watts, Ed Long, Dick Stout, Jim Bryant, Dix Fagerberg, and all the other leaders qualify there; but, fellows, no one could ever say you’re pretty, vivacious or have a neat little figure.  No way.  Our leader, Linda Herrmann, had all your abilities, plus those last three.  She carried out the job like an old timer, setting a good pace.  So, male leaders, if you should ever begin feeling smug, think of Linda.”

Thus, for our 2,450-foot cumulative elevation gain “expedition” up North Wilson, it should come as no surprise that I thank not only tailgaters Jim Kemper and John Losse, but also my outstanding co-leader, Gini O’Brien, who can out-hike all us men.

And as we consider time transitions, whether to the New Year or through millennia, I offer my appreciation to the many Westerners, past and present, who honor our own hiking history – geologically so recent, yet still so meaningful for so many.  And of course, for the North Wilson Trail, we all thank Myrtle.