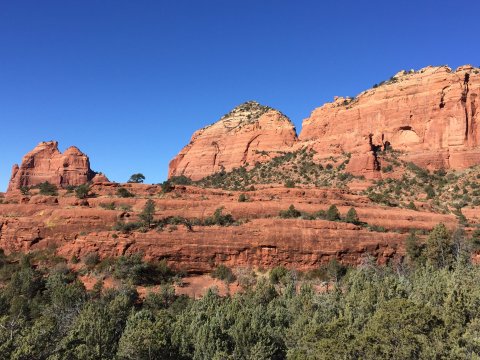 What a beautiful day for outdoor adventure seekers!  The Amblers hiking group of the Sedona Westerners met at the usual spot at Posse Grounds at 9 a.m. for group instructions and hike information on Thursday, as usual.  It was a brisk December morning with promises of a warm afternoon.  Our destination was the Munds Wagon and Cow Pies trails.  The scenic Munds Wagon trail connects the Schnebly Hill trail to the Marg’s Draw and Huckaby trails.  This historic trail also retraces one of the first and most popular cattle trails from Sedona to Flagstaff.  The route runs close to the Mitten Ridge and the Merry-Go-Round red rock formations.

Jim Munds and his employees built the cattle trail, with man-made pools, to Munds Ranch in 1883, which was used until 1902.  Upgrading the trail began in 1896 and the wagon trail construction was begun by J.J. Thompson, who was funded by Coconino County in 1902.  It was first recognized as the Munds Road and later became known as Schnebly Hill Road.  Bill Stafford, the Recreation, Trails, and Wilderness Staff Officer for the Red Rock Ranger District, reestablished the trail for hikers in more recent times.

Our hike began at the parking lot and trailhead on Schnebly Hill Road.  We gradually ascended into Bear Wallow and the trail crossed the creek several times.  Our hike leaders calculated an estimated elevation gain of 1,155 feet and about a 6.4-mile round trip for the excursion.  We found a challenging mix of loose sand and rock on the trail, which led me to imagine the horse-drawn wagon scene and the question popped into my mind:  Am I going to need new “horseshoes” after this uphill hike?

After hiking about three miles, our group reached the intersection of the Munds Wagon and the Cow Pies trail; we took the Cow Pies trail for about a quarter-mile until we reached the “Cow Pies.”  The Cow Pies are large, rounded rock formations that resemble the real cow pies created by cattle.  There are three or four huge ones adjacent to the Hangover trail and Mitten Ridge.  Once we reached them, our group enjoyed having lunch there, sprawled out on the red rock, basking in the sun, and taking in the stunning views of the surrounding red rock formations.  Once we finished our lunch and had taken pictures, our group retraced our footsteps on the Cow Pies and Munds Wagon trails back to the trailhead.

On our return trip, we passed several pools of frozen water in the creek which were havens for birds seeking hydration.  The warm, sun-drenched rocks were magnets for four-wheeling adventurers (mainly Jeeps) who were witnessing Sedona’s spectacular red rock views by driving up and down Schnebly Hill Road, which parallels the Munds Wagon trail.  Mountain bikers utilized the various access points from the trail to worship the nearby red rock formations.  What a delight to explore this one of so many great Sedona hiking trails!  World-class views!  Oh yes!