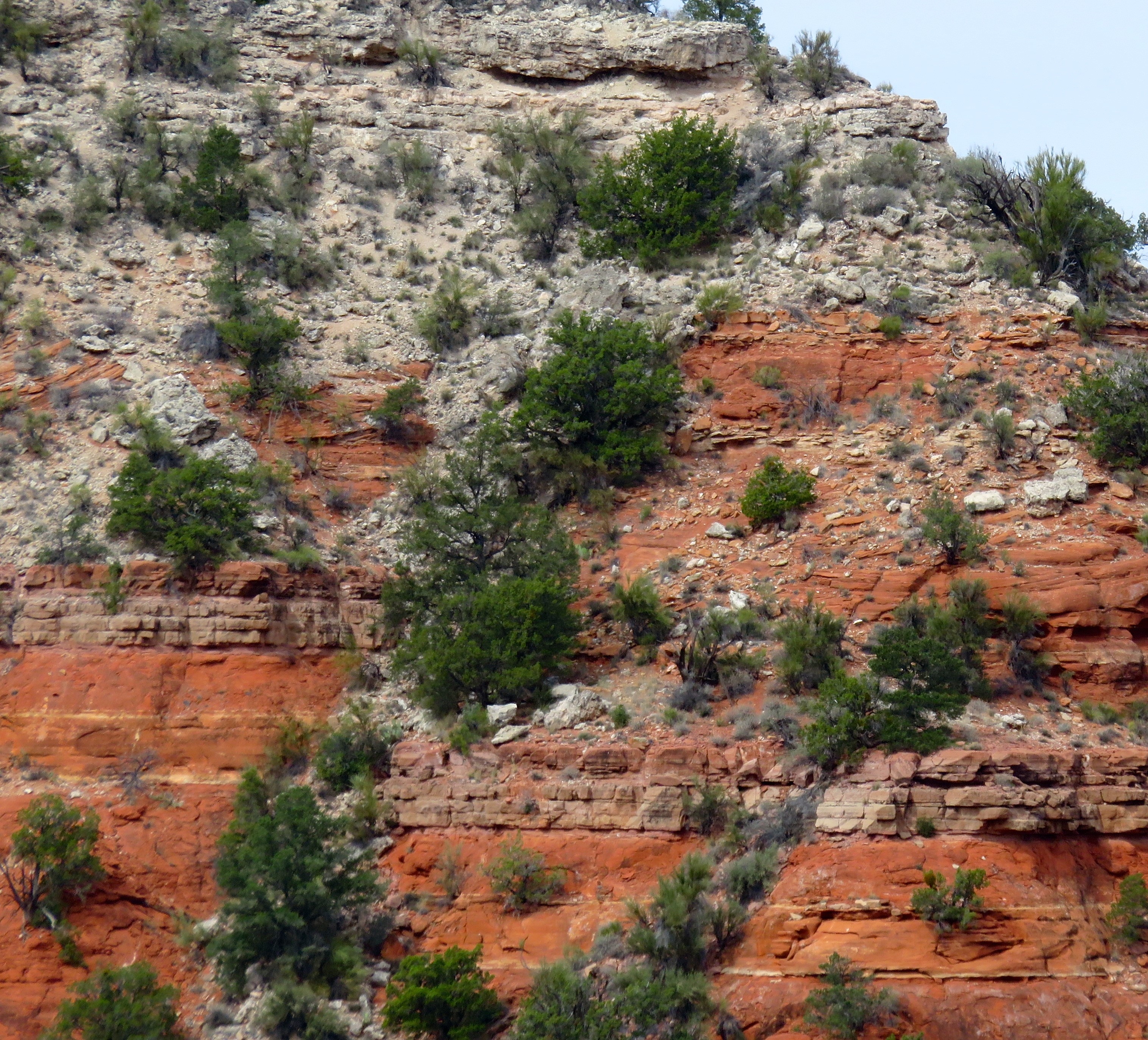 This photo shows the top of the House Mountain volcano. You can see the Verde Lake Formation deposits on top of the faulted Fort Apache Limestone Formation, which is offset in the center of the photo

Just south and little bit west of Sedona, flanking the Village of Oak Creek, is our very own volcano named House Mountain.  During a recent Tracker hike, a group of fifteen Sedona Westerners were led up the flank of the mountain by Wayne Ranney to learn more about its geology.  Wayne is a geologist, trail and trip guide, and author who became interested in the Earth Sciences while working at Phantom Ranch in the Grand Canyon.  This interest developed into a career, which included a focus on the Verde Valley and the Colorado Plateau (including the Grand Canyon).  As part of his Master’s thesis, Wayne completed a detailed geological map of the House Mountain area in 1988.

Our hike was just over six miles, using the Turkey Creek trail.  Hiking to the top of the volcano’s crater gained us 800 feet in elevation.  The first part of the hike was across our familiar red rocks of the Schnebly Hill Formation; we took breaks along the way to allow Wayne to explain its depositional history, along with comments on various plants and the history of the area. Wayne pointed out that some of the large open areas around the Turkey Creek tank were actually ancient dune fields, consisting of fine windblown sands shed from the nearby ancient highlands.

Looking at the sections of House Mountain, the Schnebly Hill Formation (which includes the Fort Apache Limestone member) consists mainly of sandstone, capped by a grayish, then reddish, cinder zone (well-cemented lapilli) and then capped by black basaltic flows.  House Mountain is a shield volcano which was built up over millions of years.  It is typified by low-lying gentle slopes, formed by the flow of very fluid lavas that erupted in an unusual asymmetric pattern covering many miles.

House Mountain has lava flows that are 15 to 13 million years old.  In contrast, the lavas atop Mount Wilson and northward up Oak Creek Canyon, are much younger, under 6 million years in age.  As our hike progressed, we also learned that the term basalt is actually a generalization.  Closer study and geological mapping shows that the basalt field actually consists of many different kinds of rock, with long and complicated names that only a geologist would understand.  One of these types of rock, nepheline monzosyenite, briefly held our interest, given that it was sourced from the House Mountain magma chamber and consisted of a very special mineral assemblage.  When our Tracker group reached the saddle after a steep climb, we were able to look down into the crater with its two resurgent domes and across to the “house” on House Mountain, which is actually a remnant lava flow on the very crest of the old rim.  Early settlers in the Sedona area thought it looked like a house in the distance and thus, named it House Mountain.

We questioned Wayne all through the climb; we did not let him relax and enjoy the hike.  Our group had been asked to pay special attention to the loose rocks that lay along the trail as we climbed.  Those rocks previewed the general stratigraphy that we would encounter above us.  Near the top of the Mountain was a thick, well-preserved outcrop of flat-lying Verde Formation, which indicates that at one time the House Mountain volcano was underwater, covered by an ancestral lake, which once occupied the Verde Valley.  While we had lunch, we discussed many things centering on our newly-learned geology and the scenery laid out before us.  At the end, we all felt that we had an enjoyable and educational day.

For those who would like to know more about Sedona’s local geology, Wayne Ranney has written and co-authored two books specifically about the Sedona area, Sedona Through Time and Ancient Landscapes of the Colorado Plateau, which are available at many local stores.

If you are interested in joining the club, please visit the Sedona Westerners website at www.sedonawesterners.org/membership.  You are invited to our next monthly meeting at 7 p.m., Thursday, April 12, at the Sedona Methodist Church, 110 Indian Cliffs Road.  Sedona Westerners, written this week by Ernie Pratt, appears every Friday in the Sedona Red Rock News.