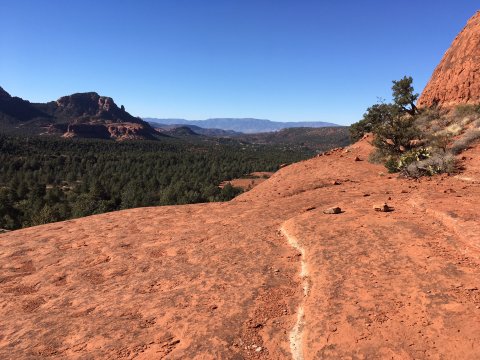 View while hiking on slickrock on MargÃ¢â¬â ¢s Draw Trail, near and below Snoopy Rock. The west butte of the Twin Buttes is to the left of center; it is also known as Elephant Rock

The Sedona Westerners hiking club Amblers hiking group recently used the Marg's Draw Trail to reach the Crimson Cliffs.  The weather was quite brisk with temperatures when we started in the upper 30s and wind gusts to 40 mph.  We had enough adventurous hikers show up to divide into two groups, including several new members joining us for their first Westerners hike.

The trailhead was on the east side of Sedona, so we carpooled up Schnebly Hill Road to the Munds Wagon Trail parking area.  There were plenty of parking spaces and a restroom.  We departed the parking area on the west side by using the Huckaby Trail.  After just two-tenths of a mile, the trail splits, with the Marg’s Draw Trail turning south, while the Huckaby Trail turns north.  The initial stretch of the Huckaby Trail and the Marg’s Draw Trail is comprised of a series of small natural rock staircases, traversing numerous small washes surrounded by an abundance of trees, which helped to tame the morning wind.

While on Marg’s Draw Trail, we could see to the south a long prominent headland stretching from the high cliffs to the east outward toward the west.  Near the west end of the headland, the caprocks form the red rock formation known as Snoopy Rock.  Snoopy can be seen lying on his back gazing up into the western sky.

After about six-tenths of a mile hiking on Marg’s Draw, the trail leveled out as it rounded the west end of the headland.  We then followed the south side of the headland toward the start of the Crimson Cliffs, where the massive red rocks form a series of colorful cliffs stretching from the end of the headland, across the broad valley towards the south.  Just below the Crimson Cliffs are a series of low ledges.  The trail meanders across the ledges, which are separated by several washes originating from the cliffs.  We did some minor rock scrambling to cross the intervening washes and ravines.

The ledges afford marvelous vistas to the west, down into eastern Sedona, including brief glimpses of Highway 179, and to the south, across the valley occupied by Marg’s Draw, looking toward the Twin Buttes.   Snoopy Rock is also still visible from the south side of the headland.  The end of our outward leg of the hike was in a wash comprised of a series of small vertical rock amphitheaters.  We rested in one of the lower amphitheaters and had lunch there, getting out of the blustery winds as much as possible.

After lunch, we retraced our steps back along the series of ledges and around the headland.  The Marg's Draw Trail to the Crimson Cliffs hike turned out to be about four and one-half miles long with an elevation gain of roughly 750 feet.  We thanked our hike leaders at the end of the hike and all agreed that it had been another great, scenic hike with the Sedona Westerners.

If you are interested in joining the club, please visit the Sedona Westerners website at www.sedonawesterners.org/membership.  You are invited to our next monthly meeting at 7 p.m., Thursday, April 12, at the Sedona Methodist Church, 110 Indian Cliffs Road.  Sedona Westerners, written this week by Hal Frank, appears every Friday in the Sedona Red Rock News.