Ambling Along the Adobe Jack Trail 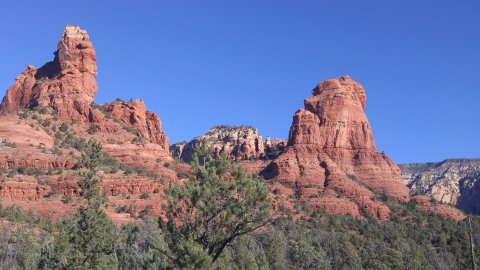 View from the Grand Central Trail looking to the west. The famous red rock formations known as the Sphinx and the Cibola Mitten can be clearly seen.

I’m a part-time resident of the Village of Oak Creek, recently returning to the area after my summer in New York.  I absolutely enjoy the fabulous weather here during this time of year.  What better way is there to enjoy it than to take a hike? I’m a member of the Sedona Westerners hiking club, which has several groups that venture out on hikes of varying difficulty in the greater Sedona area.  The Amblers hiking group, as the name suggests, chooses hikes that are considered easy to moderate and they go out every Thursday at 9 a.m.

This hike that we recently went on is known as the Adobe Jack North/Grand Central/Ant Hill Loop.  The Amblers met at Posse Grounds Park and carpooled to the starting point at the Soldier Pass Trailhead.  We were of sufficient numbers to warrant dividing into three smaller groups.  The group leaders were Linda Schermer, Al Barton, and Jean Barton. The Tailgaters were Pat Priore, Patti Pierce, and Toni Coon.  I was part of the trailing group.

The hike starts out on the Soldier Pass Trail heading northeast a short distance to where it meets the Jordan Trail, near the Devil’s Kitchen (more on that later).  From there, we headed east on Jordan, then generally south on the Grand Central Trail.  This section of the trail affords some spectacular views of the red rock formations known as the Sphinx and the Cibola Mitten, as well as the backside of Coffee Pot Rock.

From the Grand Central Trail, we were supposed to turn onto the Adobe Jack Trail, but inadvertently missed the turnoff.  We eventually realized our mistake and backtracked, thus adding about an additional four-tenths of a mile to our hike. Once back on Adobe Jack, we continued south for approximately a mile.  This was the longest stretch of the hike on a single trail and it was fairly level, from what I remember.  At our southernmost point, we took the Manzanita Trail east, then the Powerline Plunge and Shorty Trails north, to meet up once again with the Grand Central Trail.

The Grand Central Trail took us to the summit of the hilltop known as the Ant Hill. Ascending that hilltop was the steepest part of the hike, but well worth it, for we enjoyed 360-degree panoramic views of Sedona while having our snack/lunch atop the Ant Hill.

After the break, we returned to the trailhead via the Grand Central, Jordan, and Soldier Pass Trails, but not before admiring the beauty of the Devil’s Kitchen sinkhole, which is adjacent to the trail.  If you’re not familiar with this local rock feature, it’s a large sinkhole that initially formed in the 1880s and was later enlarged by another collapse in more recent times.  It’s worth visiting even if you’re not a hiker.  The Forest Service has placed an interpretive sign there to explain the formation of the sinkhole.

We all came away thinking what an enjoyable hike this was. We had hiked four miles with a cumulative elevation gain of 649 feet and it took us two hours and forty-five minutes to complete the hike.  Another great day with the Sedona Westerners!

If you are interested in joining the club, please visit the Sedona Westerners website at www.sedonawesterners.org/membership.  You are invited to our next monthly meeting at 7 p.m., Thursday, April 12 at the Sedona Methodist Church, 110 Indian Cliffs Road.  Sedona Westerners, written this week by Jim Sweeny, appears every Friday in the Sedona Red Rock News.