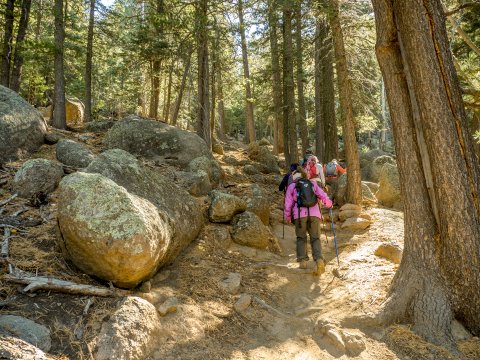 Sedona Westerners are seen here hiking on the Sunset Trail near Mt. Elden in Flagstaff. This portion of the boulder-strewn trail is known as the Hobbit Forest, since it resembles the forest in J.R.R. TolkienÃ¢â¬â ¢s Lord of the Rings trilogy.

After the golden aspen leaves have fallen, few people make the journey north to Flagstaff to hike.  However, the weather is refreshing, the scenery is still spectacular, and you practically have the trails to yourself.  So, not too long ago, the Mustangs hiking group of the Sedona Westerners chose to explore “the Catwalk,” on the north side of Mount Elden.

Popular with mountain bikers and hikers alike, the Catwalk (aka Organ Donor) is a portion of the Sunset Trail that connects Schultz Pass to Mount Elden.  As the trail winds past Little Elden and above Elden Springs, one begins to wonder, who was Elden?  Louise Gelotte, the hike leader, provided her version of who he was.

Around 1877, Civil War veteran John Elden arrived by covered wagon to the Flagstaff area, four years before the city was founded.  His family was among the earliest settlers in the area and built their one room log cabin by a small spring.  In those days, as today, water was a precious commodity.  The old saying, “Whiskey is for drinking and water is for fighting,” certainly rang true for these early pioneers.

The story goes that one day, John Elden was away from home when a mule skinner tried to water his mules at the spring.  John’s wife Susan told the herder to move on; there simply wasn’t enough water for their own needs, much less a stranger's mules.  In anger, the herder left, but squeezed off a random shot in the direction of the family.  John Elden Jr., only six years old, was killed.  In short order, a small posse was formed and “frontier justice” was exacted.  To this day, local school groups still visit the grave of little John Elden Jr., often leaving small toys and plastic flowers in his honor.

Enlightened as to who the Elden family was, the group continued hiking the Sunset Trail through pine, fir and aspen forest with occasional views of the majestic San Francisco Peaks.  Along the way, we noticed several trees marked with orange paint.  The markings always had a stripe at eye level and another mark at the base of the tree.  Upon closer examination it became clear that areas in the forest without painted trees were pristine and clear of debris on the forest floor.  The reverse was also apparent.  Areas with marked trees had extensive debris on the forest floor and the forest was more cluttered.  The group concluded that the U.S. Forest Service must be preparing the area for thinning operations.  As it turns out, according to the U.S. Forest Service Handbook, trees marked with orange paint are “keepers”.  After thinning, if there is a stump with an orange mark at its base, the wrong tree was cut down, resulting in a penalty for the errant lumberjack.

After climbing through the boulder-strewn so-called Hobbit Forest, the trail emerges onto an open ridge where the Catwalk begins.  The absence of trees makes for some stunning vistas: Sunset Crater, the Painted Desert, and the San Francisco Volcanic Field were all in clear view.  Unfortunately, this lack of trees is due to the Radio wildfire of 1977.  As with 90% of wildfires, this fire was the direct result of human activity – an abandoned campfire.  Recovery has been excruciatingly slow in this area, since most of the topsoil has eroded away, thus making it difficult for new growth to take hold.

After cruising the Catwalk and taking in the spectacular views, we hikers happily transformed into bumps on a log, enjoying our lunches while overlooking eastern Flagstaff.  All of us were grateful for yet another glorious day outside in nature.

If you are interested in joining the club, please visit the Sedona Westerners website at www.sedonawesterners.org/membership.  You are invited to our next monthly meeting at 7 p.m., Thursday, March 8, at the Sedona Methodist Church, 110 Indian Cliffs Road.  Sedona Westerners, written this week by Clinton Gelotte, appears every Friday in the Sedona Red Rock News.