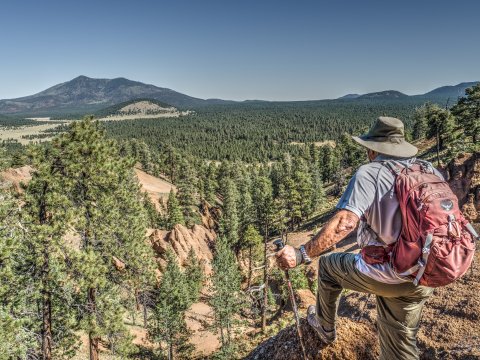 On a recent, sunny, fall morning, the Sedona Westerners’ Thursday hiking group, the Mustangs, met in the deep woods west of Flagstaff to hike and explore Wild Bill Hill.  We were eager with anticipation, this hike being a brand new one for the Westerners.  Co-led by Dave and Joyce Minott, we started our trek through the lovely Ponderosa Pine forest. Some parts of this hike route are said to coincide with the local course of the historic Beale Wagon Road, built in the 1850s, to provide settlers with a southern route westward from Arkansas to California.  An intriguing fact:  a large troupe of camels had served very capably on the road construction team!  Of course, that meant that camel facts and camel jokes kept popping up as we hiked along.

Soon we emerged from the trees onto Government Prairie, a vast grassland extending westward for as far as the eye can see.  Rising from the prairie ahead, imposingly, loomed Wild Bill Hill, an extinct volcano, which was our quarry.  We huffed and puffed our way up the steep, grassy incline of Wild Bill Hill, reaching the summit out of breath. Our reward at the top was a commanding view of the San Francisco Peaks to the east and Sitgreaves Mountain to the west. We then descended from the summit onto a nearby col.  There, we enjoyed a snack break, while peering through white Aspen saplings to the horizon and Humphreys Peak.

We then re-entered the forest, soon reaching the other side of Wild Bill Hill.  There, we abruptly entered a different world.  No more grassy slopes, no more forest.  We found ourselves standing atop the rim of a steep canyon, looking down into the abyss below and across to the steep canyon walls with dramatic hoodoo formations of red volcanic rock. Looking up from the rim, there was Kendrick Mountain, dramatically occupying the entire horizon.

Being Westerners, we simply had to find a way to get down to the canyon floor, explore, and follow the canyon out to the bottom of the hill. We descended carefully down the steep wall of the canyon to the bottom, where the canyon floor turned into a true slot canyon. We found ourselves having to bend, twist, and turn to negotiate our descent through the narrow, serpentine canyon walls.  We loved every minute of it!  What a wonderful surprise to find a real slot canyon to explore so close to home.

Having reached the bottom of the canyon, we then hiked back over the prairie and through the woods to our cars, ending our 5-mile hike.  But, we were not yet done for the day.  Just two miles north is the Lava River Cave. We piled into our cars and soon found ourselves at the cave entrance.  As the cave is dark and chilly, we donned our jackets and headlamps and then descended into the cave, exploring its entire ¾-mile length. It took both skill and care to pick our way over the rock-strewn floor of the cave.  The cave ceiling was often well above us, but sometimes it became a head-bumper.  In places, minerals on the ceiling sparkled in our headlamps like silver.  At one point, deep in the cave, a group of about 12 little children wearing headlamps approached us in the pitch black.  It was magic – a quiet sea of twinkling little lights, a lot like the fireflies scene in that old Disney film classic, Fantasia.

Tired, but happy, we emerged from the cave, hopped into our cars and headed back down over the rim to Sedona and home.

If you are interested in joining the club, visit the Sedona Westerners website at www.sedonawesterners.org/membership.  You are invited to our next monthly meeting Thursday, November 9, at 7 p.m. at the Sedona United Methodist Church, 110 Indian Cliffs Road.  Sedona Westerners, written this week by Dave Minott, appears every Friday in the Sedona Red Rock News.