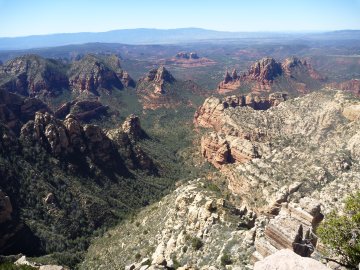 The trailhead, at 5,592 feet, is on the side of the Schnebly Hill Road.  The larger group broke into two smaller groups.  Tom Yager led one and Dave Vanderwater was the tailgater.  Charlie Schudson led the other group and Randy Barcus was their tailgater.  The tailgater always hikes last in the group and takes a headcount whenever they stop, to ensure that all members are accounted for.  Starting up the dirt trail, we traversed the west-facing slope, heading for the Mogollon Rim, which we could see above us.  The trail was lined with large and small basalt boulders that had fallen from the rim above.  The vegetation was initially manzanita, scrub oak, and juniper with some scattered prickly pear cactus and yucca.

Once the Schnebly Hill trail reached the rim, the vegetation transitioned to Ponderosa pine and scrub oak trees.  The trail was covered with pine needles and oak leaves and was shaded by the trees.  We enjoyed this due to the soft ground and the relief from the intense sun.  Soon, though, we broke out of the forest and found ourselves hiking a very rocky trail, embedded with basalt rocks from the caprock of the Mogollon Rim.  We spotted many wildflowers along the trail, such as purple lupine, pink mountain phlox, and red penstemon.  The Schnebly Hill trail ended at the saddle between Schnebly Hill and Munds Mountain.  We then continued on the Munds Mountain trail toward our goal, the Munds Mountain overlook.

Hiking on the Munds Mountain trail was interesting.  We reached 6,900 feet elevation at the highest point on the mountain, before descending to the overlook.  The vegetation along the ridgeline was primarily scrub oak, with many alligator juniper trees also.  Wildflowers were abundant, as were cacti and succulents.  There were numerous agave, yucca, prickly pear, hedgehog, and pincushion cacti.  Curiously, though pincushion cactus is normally found as an individual plant, in this area it grew in clusters and closely spaced together.  The hedgehog cactus, which also normally grows as an individual cactus, was found in large clusters here.  The trail, and the surrounding dirt, was covered with elk tracks and elk scat.  It was obvious that there is a large elk population on top of Munds Mountain and that it uses the same trail that we hikers use.  Finally, both groups arrived at the Munds Mountain overlook and were stunned by the magnificent red rock views sprawling below.

We had lunch at the overlook, where we admired the beautiful panoramic views of Sedona and its surrounding red rocks.  We could see all the major red rock formations and we took numerous pictures from this 6,400-foot vantage point above Sedona.  Following lunch, we hiked four-and-a-half miles back to the Schnebly Hill trailhead.  As we approached the trailhead, we could see from a distance the bright yellow, orange, green, and red colors of the Jeeps parked there.  Upon finishing the hike, we congratulated each other on a nine-mile, mountainous hike well done.  We all felt satisfied that we had once again gotten out in the mountains and the forest to enjoy some of the best of what the Sedona area has to offer.

If you are interested in joining the club, please visit the Sedona Westerners website.  You are invited to our next monthly meeting at 7 p.m., Thursday, November 9, at the Sedona Methodist Church, 110 Indian Cliffs Road.  Sedona Westerners, written this week by Jeff Fargo, appears every Friday in the Sedona Red Rock News.