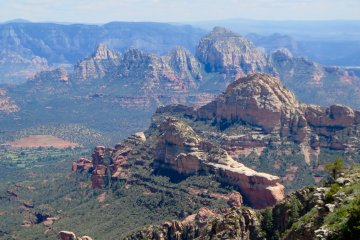 The Secret Mountain Trail offers uncommon views from the top of Long and Boynton Canyons.

This hike is rarely done because the trailhead is at the end of a network of rough Forest Service roads. The access roads start either near the top of the switchbacks in Oak Creek Canyon or off Woody Mountain Road in Flagstaff  - pick your poison, because either one will require 40 to 50 minutes of dirt road, parts of which are poorly maintained.  A high-clearance vehicle is absolutely necessary.

Anticipating the long and bumpy ride, we gathered at Sedona's Posse Ground at 6 AM, choosing the route that leaves US 89A about a mile beyond the switchbacks.  The dirt road portion passes through dense forest, high meadows, and skirts many tanks created by ranchers as watering holes for cattle. The road also passes through a swath burned nearly bare by the Slide Fire of 2014, and signs warn of the danger posed by huge dead trees, still standing but apparently not for long.  One route to the trailhead passes over the upper part of Oak Creek Canyon's West Fork, which is little more than a dry wash at this point.

The reasons for driving such a distance appeared not long after starting the hike.  At a saddle, a weathered sign marks the upper end of the Loy Canyon trail, with Loy Canyon stretching out below toward Loy Butte and Robber's Roost.  Seasoned hikers were able to pick out many hike destinations usually reached from trailheads in the Honanki area.  A bit further on we passed the shell of a cabin apparently built as a summer outpost for ranch hands by Joe Hancock, whose ranch was much lower down, at the mouth of Loy Canyon.

From this point the trail undulates between 6500 and 6700 feet, staying mostly back from the rim but occasionally popping out to offer spectacular views of the upper branches of Hartwell and Boynton Canyons.  The terrain varies from a soft pine needle cushion to sharp chert as it goes up and down.  There are patches of massive well-spaced ponderosa pines followed in burn areas by crowded ponderosa seedlings hoping to crowd out their brethren in the competition for light and nutrients.  At about 5.5 miles from the trailhead, there is a view straight down the entire length of Long Canyon which takes in features such as the Ice Cream Cone and the Hawk's Head, only as seen from far above, not the usual view.  The Seven Canyons Resort is visible at the mouth of Long Canyon, and in the far distance Thunder Mountain, the Sedona Airport, and the high school can be seen.

Although the official maps show the trail continuing another half-mile to the top of Secret Mountain itself, hike leaders Brad Kincaid and John Losse decided to take lunch where we could enjoy the magnificent views, and prepare for the return hike. The return was made with several stops, one memorable one being for a herd of 20+ elk that passed in front of our 4x4 convoy.  In the end the Mustangs had covered nearly 12 miles of trail and though tired, learned a lot about how some of our favorite canyons fit together at the very top.

If you are interested in joining the club, visit the Sedona Westerners at sedonawesterners.org. Our monthly meetings will resume again in September, 2017.