Their Crosses are Quiet and a Long Way Off 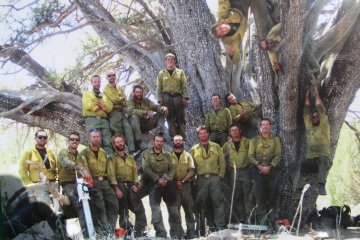 Photo of sign at the State Granite Mountain Memorial: 18 of 19 Hotshots, proud to able to save this large Alligator Juniper fighting another fire. We suspect that the 19th Hotshot is the one who took the photo. It was 11 days after this photo was

Granite Mountain Hotshots State Memorial Park was the recent destination of the Mustangs, one of several hiking groups which make up the Sedona Westerners. Arizona's newest state park was dedicated this past November to honor nineteen firefighters who lost their lives while fighting a wildfire near the town of Yarnell.  This park, and the tragic event it memorializes, reminds us of the sometimes tenuous relationship we have with nature and of the inherent danger of trying to re-establish equilibrium when that relationship has been altered.

The day was clear as we set off from the parking lot alongside Highway 89 just past Yarnell.  The trail - a labor of love, both in planning and construction, must have required a herculean effort to build.  We climbed swiftly through a series of switchbacks, offering sweeping vistas stretching to distant peaks. Closer at hand, our constant companions were granite boulders strewn about and of every size and shape. It was here, as the trail wound among these boulders, that the depth of the tragedy came into sharper focus. For attached to some of these boulders are granite plaques, etched with both a photo and a short biography of one of the lost.

We read of young men, most in their twenties, who perished while trying to protect the nearby towns of Yarnell and Peeples Valley. The stories were striking and told of service to our country, of educational achievements, of young families, of aspirations. To a man, they spoke of their love of being part of the hotshot crew. Underneath the stories was something else -  a sense we would have liked to have known these men. But now all we can hope to know is the lesson their abbreviated lives hold for us.

After a climb of some 1400 feet the trail crested and undulated along the top of a ridge. Our exertion left us in awe of the fallen: hotshots carry packs weighing up to fifty pounds. If one is a sawyer, they carry both a pack and a twenty pound saw, all while crossing wild and hazardous terrain without the benefit of a trail.

While scouting this hike for the club, we met two hotshots from California, 24 and 29 years old, who came to pay their respects. They spoke of how the stories on the boulders were their stories, as they are one and the same. They spoke of fraternity, engendered by their reliance on each other. They spoke of a reverence for wildfire itself - its capricious nature and ability to drain energy and willpower away when you need it most. Fighting wildfire is a job for the young - most hotshots move to engine crews by the time they are thirty.

At the end of the ridge, we rested for a few minutes, under a structure shielding us from the sun.  Some 400 feet below, we could see the fatality site. We made our way down the switchbacks and arrived at a circle of 19 rectangular gabions connected by chains in a final symbolic display of fidelity. Fire departments, hotshot crews and other organizations have placed badges and patches on a couple of the gabions as tributes to the fallen. Inside the gabions, stand 19 crosses, arrayed irregularly, at the spot where each of the Granite Mountain hotshots had persished. Each bears a name:

It is not necessary to recount our return to the trailhead. It is more useful to search for meaning, where any can be found. The late Norman Maclean, author of Young Men and Fire*, who himself, almost perished while fighting wildfire, wrote of thirteen smokejumpers lost in the Mann Gulch fire of 1949:

“Their crosses are quiet and a long way off, and from this remove their influence is quiet and

seemingly distant.  But quietly they are present on every fire-line, even though those

lives they are helping to protect know only the order and not the fatality it represents.  For

those who crave immortality by name, clearly this is not enough, but for many of us it

would mean a great deal to know that, by our dying, we were often to be present in times of

catastrophe helping to save the living from our deaths.”

If you are interested in joining the club, visit the Sedona Westerners at www.sedonawesterners.org/membership. Our monthly meetings will resume again in September, 2017.