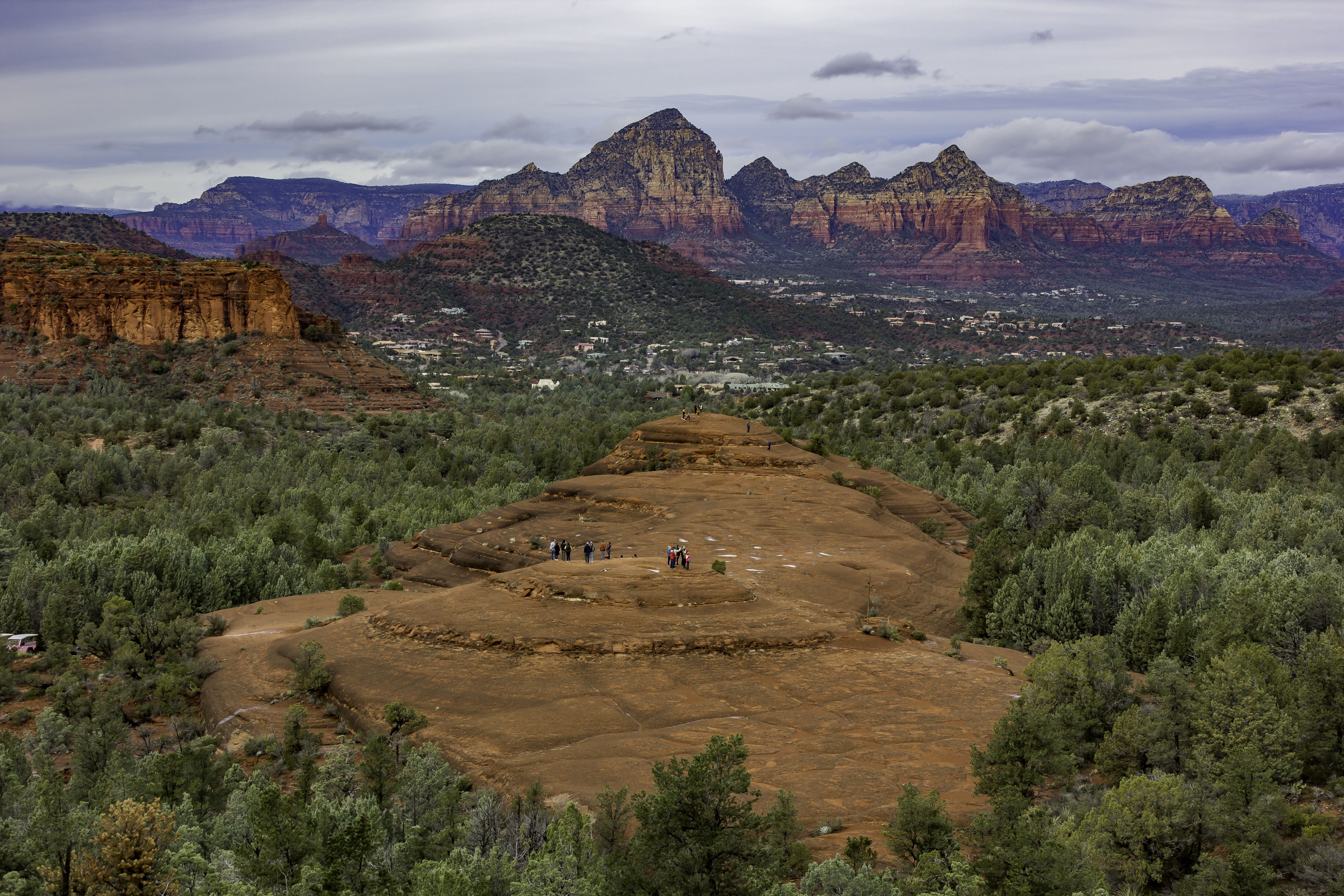 This is not your usual Sedona Westerners weekly article. It does relay some specific trail information but primarily this is a cautionary as well as a hopeful tale concerning the aptly named “Broken Ankle” trek. On January 4, 2016, then Sedona Westerner Trail Boss Mary McCaffrey dislocated and broke her right tibia and fibula bones. There was a team of 8 hikers traversing the territory 2 miles east of the Marg’s Draw trail on their way to Chicken Point. Tragedy struck on an overcast, drizzly day when the 911 call was made to request a rescue. Since we were in Coconino County at the time, the call was routed to snowy Flagstaff to gather the rescue workers for their trek to Sedona. In the meantime, Sedona Fire Department was also called into action and as it turned out was the first to reach the injured hiker in about an hour and a half. Jordan Baker, Aron Sheehan, Jarrott Tarver, Millan Zorita, and Mark Howard were the intrepid rescuers who hauled a 75 lb. big wheeled gurney to the site, stabilized and loaded Mary and began the hike out. Much to Mary’s disappointment, it was so overcast that a helicopter rescue was out of the question. The trail out (after a certain point) wasn’t as bad as the trek in but the 5 firemen had the task of manipulating the gurney and a 6 foot Mary down the trail with an eventual meetup and relief from Coconino Search and Rescue.

The cautionary part of this tale is ‘be careful and vigilant when you are out hiking because accidents can happen in the most innocuous places’.  And the hopeful part of the tale is we have such superb teams as Sedona Fire Department and Coconino Search and Rescue who are only a phone call away if a need ever arises’. Thanks again to Jordon, Aron, Jarrott, Millan, Mark and the other team of rescuers for their incredible help that day. You are never alone in the wilderness.

Of course, the Sedona Westerners are never ones to pass up an opportunity to commemorate an event and quickly named the trail Broken Ankle. Three of the hiking groups (Dogies, Mustangs, and Rough Riders) made plans to complete the pilgrimage but because of adverse weather conditions it was the Dogies who were the first to commemorate the one year anniversary of the event. Led by an undaunted Mary McCaffrey and her husband Michael and ably tailgated by Don Kling and John Freeman the Dogie hikers were escorted through an environment of other worldly beauty. Beginning at the Sombart Lane trailhead, the trekkers headed east into the Munds Mountain Wilderness and Marg’s Draw passing sun bathed Snoopy Rock, the vertical vista of the Crimson Cliffs, the Damfino Canyon Gap and at the two mile mark, stopped for a moment of silence at the actual spot where the broken ankle occurred. Quietly (if you can believe that) the jaunt continued, with brief respites at some of the spots the rescuers had to maneuver the gurney, until the junction of the Holy Grail Trail was reached.  The trail headed south at this point, following the stream bed for a short distance then up to continue along the lower elevations (4600 ft) of Munds Mountain.

Hikers were treated to spurs of the Munds Mountain Wilderness and vast stretches of red rock plateaus, one of which served as an elegant dining room for the afternoon lunch, then continued past multiple frozen waterfalls, to a sensational view of Submarine Rock and a multitude of Pink Jeep aficionados dotting its surface. Chicken Point and the Broken Arrow Trailhead beckoned across the way as we headed into the creek bed to begin our northerly trek to the Marg’s Draw Trail junction.  As if the hike itself wasn’t enough exercise, now we were treated to a balance enhancing jig of hopping from boulder to boulder as we continued in the stream bed to an eventual egress to the jeep road and the walk to Marg’s Draw Trail.

Knowing that the 7 mile walk was almost done tempered the mood somehow. Buildings of Sedona proper soon came into view to add a little to the sadness at the completion. How blessed we are to live in such a beautiful spot filled with such wondrous vistas and friends. Thank you Sedona!

:  If you are interested in joining the club, visit the Sedona Westerners at sedonawesterners.org/membership.  We invite you to attend our monthly meetings:  next one will be on Thursday, April 6, 2017 at 7 p.m. at Saint John Vianney Parish, 180 St. John Vianney Lane in Sedona.