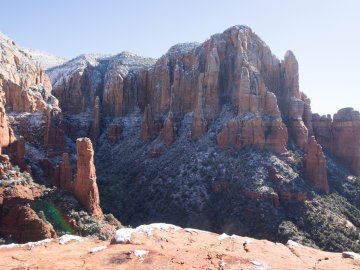 Surrounded by the snowy multi-spired walls of Lost Wilson and Maroon Mountain, the Sedona Westerners paused for a scenic break on their Brins Mesa, Soldiers Pass, Cibola Loop

On Tuesday, November 29, Sedona Westerners hiked to a common destination on an uncommon day. Mormon Overlook, located as it is conveniently above Uptown, is famed for its CinemaScope views on any day, but after a Monday night storm left new snow in the area, it was definitely something special.

Eighteen of us started at the Jordan Road trailhead. We formed two groups, led by Mary McCaffrey and her husband Mike, with Dave Vanderwater tailgating. A couple of inches of snow had fallen above 5000 ft. that night, leaving the Brins Mesa Trail slightly muddy as we hiked up the stairstep of sandstone layers leading to the top of the mesa.  As we neared the top of the mesa we crossed the snowline. At the top we turned right and moved through the trees, still bare from the Brins Mesa fire of June 2006, and the bushy new growth that has sprung up between them since.

The east and highest end of the snow-laced mesa was Mormon Overlook, which is surrounded by the snowy multi-spired walls of Lost Wilson and Maroon Mountain, visible across a deep wash as you see in the picture. As we paused for a snack stop to admire the view, we scraped up just enough snow to build, not a snowman exactly, but more of a snow bear cub to mark our passing. Pincushions of brilliant green moss, happy for the wet day, flourished along cracks in the exposed rock.

After our snack break we returned to the place where the Brins Mesa Trail first emerged onto the flat and continued on it toward the backside of the mesa. Entering intact forest as we crossed behind Brins Ridge, we continued to the junction with Soldier Pass Trail, which we then took down into that adjacent basin to the one where we started. As we descended the steep trail into Soldier Pass we left the snow behind. After pausing at Seven Sacred Pools, thankfully deserted on this chilly day, for lunch, we crossed in front of the huge Devils Kitchen sinkhole to find the Cibola Trail. This took us back, passing Mitten and the old fenceline, to our starting point.