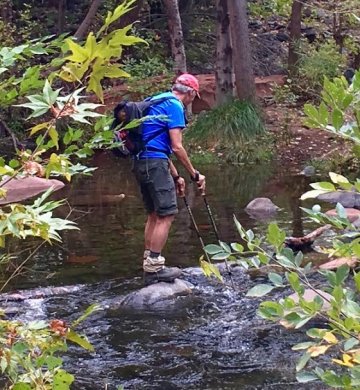 Our fearless leader, Mike Holmes, wearing gaiters over his boots, pondering his next step. With his long legs, Mike successfully completed the last leap from log to shore, without missing his landing. Most of the group opted to exchange hiking boot

Recently the Westerners took advantage of the mild fall weather (and before this most recent cold snap), to hike into West Clear Creek.  The drive from Sedona, south to the trail head is about twelve miles, and the last couple of miles are best driven in a high clearance vehicle.

The Dogies, led by Mike Holmes and co-led by Charlie Schudson with Tailgaters Burt McLean and Dan Wheeler, set out to hike the main trail of West Clear Creek from the trail head at Bull Pen Ranch up canyon about 3 miles, have lunch at a spot along the creek and then return by the same route.

By following this route we were going to have to cross the creek four times. Twice in each direction. Hiking West Clear Creek in the fall is always a guess as to what kind of weather you might have. If there hasn’t been a lot of rain recently, the flow in the creek is usually not very deep. The hikers were hoping that the water would not be too high, but mostly, not too cold.

As luck would have it, the hiking conditions were ideal. It was a wonderful day in the mid 70’s, and the water turned out to be cool, but not cold.

As we started the hike, our group commented that the trees had not yet started to change color and not far away in Oak Creek Canyon the colors had been in full display for at least the past month.  What a difference a thousand feet (or so) in elevation makes.

On the first part of the trail we stopped by the remains of a small cabin built of rocks and what appears to be cement. We took time to speculate about what it may have been used for. It may have been a line shack for when the area was in use for ranching, or perhaps storage. The walls are still standing, though the roof is no longer there.

Not far after the shack, the trail drops down to the creek. A nice shady spot among some rocks along the creek provided the perfect spot for our break.  Next, we were on our way to the first small challenge.

Creek crossing number one offered everyone the option of carefully crossing on a few rocks and a well-placed log, or wading through the creek. When we scouted the trail the week before, I made it across via rocks and a log.  However when next member of the scouting team went across, she found out at the end that her legs weren’t quite long enough to make the last leap from the log to shore, landed on that part of the rock that lay below the water line, slipped of course, and ended up with an award winning soaker, grazing her shin but was none the worse for wear.  First aid was self-administered.  Battle scars.  She wore them proudly.  She replaced her wet socks with dry ones after the return crossing. This is why the Westerners always scout a trail first:  to ascertain what difficulties lie in wait in order to avoid mishaps on the actual hike day.  The notations for this hike were changed on the website to reflect the deep water crossing.

Today, the few members of the group who tried the rocks and the log made it across without getting their feet wet. The majority of the group however, swapped their hiking boots for shoes that they had brought specifically for the occasion and waded across.  And those who were vertically challenged found the water a little higher than they might have liked:  thigh deep.  Refreshing!

Not too much further was the second crossing, and everyone had to wade. This one was not as deep, thankfully, and once again we made it to the other side without incident.

Most of the group changed back into their hiking boots at this point and prepared to hike to our lunch spot, along the creek in a shady spot just before yet another crossing.

After lunch we retraced our steps to head back to the trail head and the cars without incident. As we followed the trail close to the creek, the evidence of high water flow helped us appreciate even more, the outstanding day that we had in West Clear Creek.

Sedona Westerners, written this week by Mike Holmes, appears every Friday in the Red Rock News.