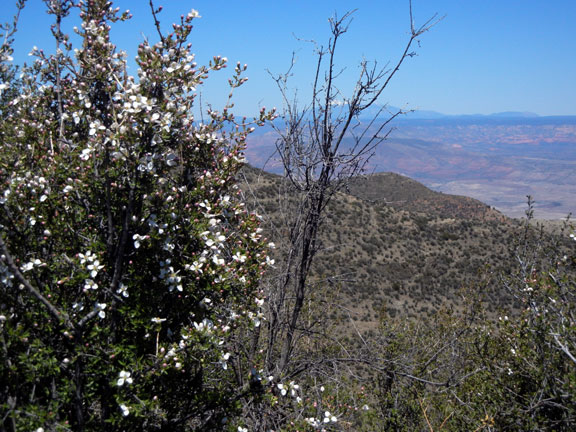 Cliff Fendler Bush at our lunch spot. The vista you see is north east to the snow capped San Fransico Peaks. What a view! And what a lovely scent from the Fendler Bush, a close relative to the Cliff Rose.

On April 19th, the Sedona Westerners Dogies enjoyed an invigorating hike in cool spring air on the Woodchute Trail just south of Jerome in the Black Hills. Temperatures were a comfortable low 60 degrees F for the hike.  Hikers met to discuss the hike and go over the rules with co-leaders Jim Warren and Louise Osborn. The hike was approximately 7.5 miles round trip and started at an elevation of 7,023 ft. and continued upwards for about a 770 ft. elevation gain for the lunch stop.

There was a cattle tank immediately on the right as the hike began.  After one and one half miles, hikers came to a nice ridge where, on the left, one could see a great view of the Prescott Valley at the same time as on the right, a wonderful panoramic vista of Clarkdale, Cottonwood, Sedona’s red rocks, and the snow covered San Francisco Peaks of Flagstaff on the horizon. The view towards Sedona was also framed by a lovely grove of Cliff Fendlerbush in full bloom with beautiful pink-white blossoms and sweet fragrance. This rose-like shrub differs from the Cliff Rose by the color of its’ flowers, the Cliff Rose having yellowish blossoms (and wonderful fragrance as well.) Also numerous Stemless Daisies doted the ground. On this same ridge, an adult and a baby horned toad were spotted.  A steep ascent brought hikers through what had been the “woodchute” part of the trail. The leader explained how the timber was cut and hauled down hill to be used in the mine shafts in Jerome.  Birds such as the Bewick’s Wren, Yellow-Rumped Warbler and Bridled Titmouse serenaded the hikers for the climb up the ridge. Also, Western Scrub Jays, possible Pinyon Jays and Common Ravens made their presence known.  Wild turkeys were observed and heard when scouting this trail the week before the hike.

Once the hikers reached the top of the incline, the trail flattened out a bit and they made their way to the lunch area.  What a great view for the lunch spot! The concrete plant lay sprawled out directly below and the Tuzigoot ruin could be seen with the aid of a couple pairs of binoculars that some hikers wore. The rest of the lovely scene featured the Verde Valley and the red rocks of Sedona.  A Peregrine Falcon flew straight up above the picnicking hikers till the bird was no longer visible. With the food all finished, the hikers headed back the same trail and talked about the next stop at a cattle tank off to the right at the base of the hill. The wind started to pick up. Numerous cattle tracks were observed in the mud around the tank. Some smaller prints had some claw marks too, but were a little indistinct for identification. Small blue butterflies and brown butterflies hovered in the damp hoof prints around the water. A forest of ancient Alligator Junipers, Ponderosa Pine, One Seed Juniper, Pinyon Pine and Utah Juniper surrounded the cattle tank. Some Alligator Junipers have been known to reach 1500 years in age although more commonly, 500-800 year life spans are observed.  It is a wonderful feeling to be hiking on the Woodchute Trail with a bunch of friends, old and new. It was pleasant during some periods of silence, to listen to the breeze whistling through the pine needles, inhale the wonderful scents from the evergreens, and hear the various bird calls. In no time at all, the hikers were back to the parking lot with a great memory to share of the Woodchute Trail.