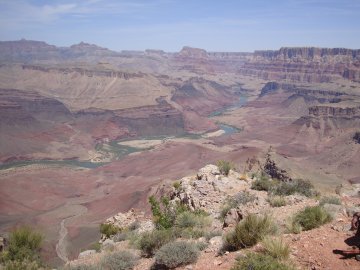 View from the Cardenas Butte Overlook on the Tanner Trail, Grand Canyon National Park. Visible is the Colorado River 3000' below, the Unkar Delta, Tanner Rapids and upriver in the distance, the Little Colorado River Gorge

Well before sunrise on Thursday, April 21, 2016 The Mustangs of the Sedona Westerners were getting ready for their Grand Canyon hike on the Tanner Trail to the Cardenas Butte Overlook.  Leaving promptly at 6:00 am from both Posse Grounds in West Sedona and the outlets in the Village of Oak Creek, the Mustangs made their way to their rendezvous at McDonalds on Highway 89 in Flagstaff.  After a quick bite to eat, the group headed for the East Entrance of Grand Canyon National Park.  During the drive, the Westerners observed Sunset Crater to the East, the snow capped San Francisco Peaks to the South, and the overlooks to the Little Colorado River.

Upon entering the Park, the Westerners passed Desert View and Mojave Point and in another mile or so parked at the Lipan Point parking lot (El. 7400’), the trailhead for the hike.

At the Trailhead, leader and backpacker extraordinaire, Mike “Mr. Grand Canyon” Holmes, gave an outline of the hike as well as some history of the Tanner Trail.  The Tanner Trail is approximately 9 miles to the Colorado river and follows the drainage of Tanner Creek in Tanner Canyon.  The canyon and creek were named after prospector Seth Tanner who utilized and improved sections of the trail which were originally part of the old Anasazi and Hopi Indian routes into the canyon.  Seth Tanner had his mine near Palisades Creek upriver from the Tanner Delta on the Colorado River where the Tanner Trail ends.  It is of note that the first European to visit the Grand Canyon was Garcia Lopez de Cardenas who in 1535, in his search for the fabled Seven Cities of Gold, discovered the Grand Canyon in the vicinity of the hike into the Tanner Canyon.  The butte which the Westerners circumnavigated is named after him.

The hike began on the very steep, unmaintained Tanner Trail.  Footing was treacherous with many loose rocks and larger boulders which impeded progress down the trail.  On occasion, some Westerners’ posteriors got very familiar with the trail due to slippage.

The first rest break was a mile and a half in distance and 1700 feet down the trail on a saddle containing Stegosaurus Rocks, an unusual rock formation named after and resembling the spines on the dinosaur.  This saddle also overlooked spectacular 75 Mile Canyon.   At this point Tanner Canyon, Mojave Point, and the Watch Tower at Desert View overlook were all visible up-canyon to the south.  The hike to this point had passed through the first three rock layers of the Grand Canyon notably Kaibab limestone, the Toroweap formation, and Coconino sandstone.  The massive Escalante Butte was to the left and north and in the distance about three miles away, our destination Cardenas Butte.

Travelling now on a much better and safer trail through the Supai Group, the fourth rock layer of the Grand Canyon,  the hike proceeded south of Escalante Butte, around its drainage, and then up and around Cardenas Butte.  The next stop was lunch at the Cardenas Butte overlook (5400’), located just above the Redwall break where the Tanner Trail begins another very steep descent toward the Colorado River 3000 feet below.  At the overlook, Sedona Westerner Mustangs were able to see massive Tanner Canyon, the Palisades above Tanner Canyon, Tanner Rapids, the Unkar Delta, nine miles of the Colorado River as it flows downstream from its junction with the Little Colorado River gorge and our constant landmark, the Watchtower.  The view was truly sublime, one not easily forgotten.

Lunch over, co-leader Gini O’Brien briskly led the group back up the same trail, once again pausing for a break at 75 Mile Saddle at Stegosaurus Rocks before beginning the long, slow and arduous climb back to the top of the Tanner Trail at Lipan Point.

Exhausted and hungry after the 8.5 mile, 3000’ up and down hike, the Westerners headed to Flagstaff for a well-deserved meal before returning to Sedona and VOC around 9:00 pm.  A long but very interesting and rewarding day.

Special thanks to Mike Holmes and Gini O’Brien, our leaders who did a great job with an equally pleasant attitude.

If you are interested in joining the club, visit the Sedona Westerners website or just come to one of our monthly meetings. The next one will be on Thursday, November 10, 2016 at 7 pm at Saint John Vianney Parish, 180 St. John Vianney Lane in Sedona.

Sedona Westerners, this week is written by Rhett Atkinson, appears every Friday in the Red Rock News.